The Surprisingly Heartwarming Story of the Man Who Invented Sriracha Sauce 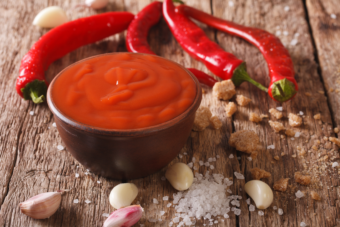 The genesis of Sriracha hot sauce (pronounced sir-ah-cha, contrary to what many think) becoming the condiment staple it is today can be traced back to 1975 and an unassuming Vietnamese refuge called David Tran- the founder and current CEO of Huy Fong Foods.

Following the Vietnam war, Tran, who was a Major in the South Vietnamese army and otherwise made his living making sauces,  fled Vietnam with his family in December of 1978, along with 3,317 other refugees, aboard a Taiwanese freighter called the Huey Fong (meaning “Gathering Prosperity”)- a name he’d later Anglicize and use as the name of his massive, spicy empire.

Like many successful businessmen, Tran made his fortune by noticing a consumer demand that was going unfulfilled and filling it- in this case, it all started with a demand for hot sauce amongst the many Southeast Asian immigrants in LA.

More specifically, Tran got his start in the U.S. by making a sauce he called Pepper Sa-te (that he literally made in a bucket, bottled in recycled baby food jars, and sold first via bicycle and later out of a blue Chevy van). Tran noted, “I started the business with my eyes closed. There were no expectations at all… My American dream was never to become a billionaire. We started this because we like fresh, spicy chili sauce.”

Having a modicum of success in the industry, he began experimenting with local ingredients, eventually creating a slight variation of a Thai recipe he liked that used, to quote, “hybrid jalapeño peppers, vinegar, sugar, salt, and garlic”. He named his version of this sauce “Sriracha”, after the coastal town, Si Racha, in Thailand where the base recipe he tweaked originated.

Recipe perfected, he began selling his Sriracha sauce alongside his Pepper Sa-te.

To quite literally put his stamp on his sauces, like he had previously done in Vietnam, Tran attached a label with a rooster on every bottle of sauce he sold. According to the man himself, he chose a rooster as the symbol for his company because the year he was born, 1945, was the year of the rooster according to the Vietnamese zodiac.

As for who designed the now famous logo, not even Tran knows and he credits the original drawing, which he has long since lost, to an unnamed Vietnamese street artist he met in the 1970s. As Tran quipped, “I never thought that I’d be successful so I didn’t keep any of my souvenirs…”

Speaking of branding and failing to plan for success, while the exact rooster logo cannot be copied by other companies legally (though many-a-company makes exceptionally similar bottles and logos for their Sriracha to trick people into thinking it’s Huy Fong brand), Tran didn’t bother trademarking the name Sriracha, so any company can call their product that without fear of being sued.

Given how popular the sauce has become, such copying is now common practice. For instance, even the likes of Taco Bell has jumped on the Sriracha knock-off train. The noted fast food chain chose to come up with their own version of the sauce, rather than just use the original Sriracha, despite in some of their ads showing the Huy Fong Sriracha bottle design and referring to their Sriracha as the “Rooster sauce”…

In their case, their decision not to use Tran’s sauce is somewhat inexplicable as Huy Fong hasn’t increased the wholesale price of Sriracha since Tran originally made it in the 1970s, meaning it’s relatively cheap, and Tran states he doesn’t charge royalties to use his sauce in this way. Because of this, many restaurant chains just go with the original, rather than the many knock-offs or making their own.

Of the Taco Bell situation, Tran laments, “For us, it’s a disappointment if people think it’s our product.” Nevertheless, he states he doesn’t regret not trademarking the name, noting that it’s basically free advertising when major companies like Taco Bell do this. Tran states, “We have lawyers come and say ‘I can represent you and sue’ and I say ‘No. Let them do it.'”

He also believes his company still makes the best Sriracha (for reasons we’ll get into shortly), so customers will eventually buy his product anyway in his opinion.

Back to the hot sauce- during the early 1980s, Tran was still selling his sauce from the back of the aforementioned van that he had personally hand-painted a large version of his rooster logo; but in 1980, his budding sauce empire had grown to require a 5000 sq foot (about 460 square meter) warehouse which he rented in LA’s Chinatown. At this point, he was making not just Pepper Sa-te and Sriracha, but also Chili Garlic, Sambal Badjak, and Sambal Oelek.

In the few decades since, the company has expanded to a sprawling facility in Irwindale, comprising of a massive 650,000 square feet (about 60,000 square meters) building. The location of this facility is critical as, unlike pretty much every other major hot sauce maker on the planet, Tran has always insisted that his hot sauce be made using fresh, rather than dried, chillies. To this end, all chillies used to create Huy Fong Sriracha hot sauce are processed within a day of being picked. Because of this, they only make new vats of the sauce at a certain time of year and Tran must source his chillies from a local farm, in this case located just an hour away from his factory in Irwindale.

Tran reports his choice of using local product (including buying the other ingredients like salt, sugar, and vinegar from U.S. companies) is not just because of the freshness, but is also to pay back the United States for being the only country that would grant him asylum when he was fleeing Vietnam.

As you might expect, being restricted to just one local supplier is a major problem for Huy Fong as they quite literally cannot keep up with the demand for their Sriracha, despite never having spent a single cent on advertising, nor, according to Tran, do they even have a sales department, having used the same 10 distributors for decades. As Tran himself so eloquently puts it “I don’t advertise, because I can’t advertise”.

That’s not to say they only produce Sriracha in small quantities. With an initial contract of using 50 acres of the Underwood family farms to grow chili peppers, today that number has swelled to a whopping 1,700 acres (about 2.7 square miles or 7 square kilometers), resulting in well over 100 million pounds (about 45 million kg) of chillies harvested over a 10 week period in which they make their entire year’s supply of Sriracha.

The result of all this is an estimated $100 million per year in revenue for Huy Fong- a number that, according to Tran, has been growing by approximately 20% per year for many years now as they manage to slowly increase production to attempt to meet demand of their sauces- king among them being Sriracha.

Beyond not trademarking the name of his flagship product, never advertising nor employing a sales department, and never once raising the wholesale price of Sriracha (a claim we have to take his word on because he’s never publicly revealed what exactly he charges his distributors), Tran also bucks the normal trend in business when demand outstrips supply, as it has pretty much since the beginning for Sriracha. Instead of raising prices, he insists his distributors never charge more than $7.99 for a bottle of his sauce, even in the largest sizes. This is to keep in line with Huy Fong Foods’ motto of “a rich man’s sauce at a poor man’s price”.

On top of this, Tran is famous for turning down very lucrative business deals in connection with his sauces, as well as several attempts by major food manufacturers to outright buy Huy Fong Foods, for no doubt obscene amounts of money.

When once asked why he was seemingly so against maximizing profits on his product, a frustrated Tran reiterated that his only goal is to sell hot sauce to those who want it, and that businesses that approach him “are never interested in the product, only in the profits…” Thus, given they don’t really care about the product itself in his estimation, he has no interest in making business deals with them, regardless of how much money it might make him.

Again, as he so poignantly noted, his simple dream “was never to become a billionaire.” But rather, “to make enough fresh chili sauce so that everyone who wants Huy Fong can have it. Nothing more.”

Notoriously secretive, Tran seldom gives interviews and has long maintained, as previously mentioned, that his only goal is to sell his hot sauce to whoever wants it- “a bottle of Sriracha in everyone’s hands is my only goal”.

This apparent hesitation to communicate and his company’s reputation for being ultra-secretive has caused some issues for Huy Fong in the past. As executive Donna Lam notes, “it was harder to get into our Rosemead plant than into the Pentagon.”

Partially as a result, directly after they moved the production of Sriracha to the aforementioned massive location in Irwindale in 2013, production of the sauce was halted by a lawsuit filed by the city claiming the grinding of chillies released “odors and eye-watering airborne irritants”.  The suit went on to claim that the factory was causing residents nearby to have nosebleeds, headaches, and a myriad of respiratory problems.

This led Tran and executives at Huy Fong Foods to decide to finally open up their factory to the public. Lam noted, “We started [the tours] initially because we wished to have the visitors judge for themselves whether we were a public nuisance or not…”

Tran himself addressed the concerns of the public about the potential irritants that could be released by the Sriracha making process by buying a large banner to hang on the door to the factory that read:

No Tear Gas Made Here

Thanks to opening up its doors to the general public and those involved in the lawsuit (and no doubt partially thanks to the fact that many other cities across the country publicly offered to take the massive company in), the lawsuit was finally dropped in May of 2014, allowing for production of Srirachi to resume.

On another note, despite Tran’s evident reluctance to maximize the revenue potential of Sriracha and near total refusal to engage with the public unless it’s absolutely necessary, he rather adorably sets aside time each day to read emails from fans of the brand and scan social media for mentions of his sauce. The 72 year old Tran reportedly especially enjoys reading about unique ways customers use his sauce.