The Space Shuttle Discovery and Its Toilet 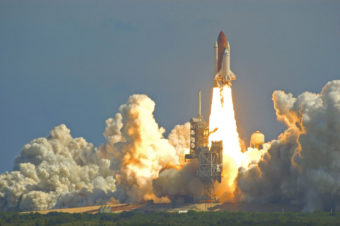 A while back we told you the story of the WWII submarine that was lost due to a malfunctioning toilet. It turns out that a similar incident threatened the space shuttle Discovery in 1989…

On November 22, 1989, the space shuttle Discovery blasted off from the launchpad at Kennedy Space Center in Florida for a five-day secret mission in Earth orbit. It is believed to have deployed a spy satellite for the Department of Defense, but since the mission was (and still is) classified, only the United States government knows for sure.

But some details of the mission have emerged, and they involve something a little more down-to-earth: the space shuttle’s toilet, or Waste Collection System (WCS), as it was more properly known. The $30 million device looked like an ordinary toilet, but because it was designed to operate in zero gravity, the experience of using it was quite different from using a toilet on Earth. The WCS toilet was equipped with a seat belt and stirrups that allowed shuttle astronauts to anchor themselves in place, so that they didn’t float away in the middle of doing their business. And instead of a flush handle, the toilet was operated with a lever similar to an automobile stick shift.

That was how the toilet was supposed to work, and that was how it usually did work. But that wasn’t how it worked early in the morning of November 23, 1989, Thanksgiving Day, when mission commander Frederick D. Gregory woke up early and had to go to the bathroom. Everything went well until he finished up and reverse-shifted to close the toilet gate valve. Gregory didn’t realize it, but the valve had failed to close. (He was still strapped to the toilet, and from that position he would have had trouble determining whether the valve was open or closed.)

When Gregory reverse-shifted again, the overboard vent valve opened. Now both the toilet gate valve and the overboard valve were open at the same time, exposing the interior of the space shuttle to the vacuum of outer space. That was a big problem: the air inside the shuttle cabin was now rushing down the toilet and out into space. If it were not stopped, the shuttle could depressurize completely, killing all of the astronauts on board.

It didn’t take Gregory long to realize that something had gone terribly wrong. As if the air rushing between his legs and down the toilet were not enough of a clue, the sudden drop in air pressure triggered a shrieking alarm that woke up the rest of the crew—just the kind of thing you don’t want to happen when your pants are down and you are strapped to a space toilet in zero gravity.

The dropping air pressure also activated an automatic system that replaces escaping air by releasing oxygen and nitrogen from storage tanks in the shuttle’s payload bay. Because the payload bay itself is open to the vacuum of space, the tanks were very cold and the oxygen and nitrogen they contained was in liquid form. Before the contents of the tanks can enter the shuttle, it is heated to become a gas…but only just—the gas is still very cold. And if Fred Gregory needed reminding, he soon discovered that the oxygen and nitrogen are fed into the space shuttle’s interior through vents located directly above the toilet. So in addition to feeling the air roaring through his legs and hearing the alarm screaming in his ears, he was also deluged by very cold oxygen and nitrogen gas being dumped on his head.

Mission Specialist Story Musgrave was the first crew member on the scene; he floated over to Gregory and together they managed to wrestle the toilet gate valve closed, stopping the leak. Then Musgrave helped Gregory, now thoroughly chilled, get off the toilet.

Crisis averted—but now the shuttle’s one and only toilet was out of order, and that meant that the mission itself was in jeopardy. NASA’s own flight rules dictated that if a space shuttle’s toilet stopped working and could not be fixed, the shuttle had to return to Earth “as soon as reasonably possible,” according to NASA Flight Director Rob Kelso, who was on duty that Thanksgiving morning.

A shuttle with a broken toilet had to return to Earth, but not because there was no other way to go to the bathroom in orbit. The shuttle did carry backup Fecal Containment Systems, better known as “Apollo bags,” that the astronauts could use if the toilet wasn’t working. Apollo bags were used on the Apollo lunar missions of the late 1960s and early 1970s. But the experience had been so unpleasant that NASA’s Flight Crew office, which is kind of like a union that represents astronauts, successfully lobbied NASA to get the break-the-toilet-return-to-Earth rule instituted, so that shuttle astronauts would never suffer the indignity of having to use the Apollo bags again.

So what was it about using the Apollo bags that made them so unpleasant that even astronauts who’d worked their entire lives to get into space would rather return to Earth than remain in space and use the bags? A number of things, it turns out:

For starters, the bags, affectionately known as “ass gaskets,” had an adhesive seal around the opening. An astronaut was supposed to glue the opening of the bag to his rear end to create an airtight seal that prevented the solid waste from escaping and floating around the cabin of the space shuttle.

Add to this the fact that in space it’s difficult for an astronaut to achieve “separation” from his or her waste without the assistance of gravity. Because of this, Apollo bags incorporated a narrow pocket called a “finger cot.” The finger cot makes it possible for an astronaut to achieve separation manually, by inserting a finger into the finger cot and pushing the waste free from their posterior with a fingertip. The finger cot was also used to push the solid waste to the bottom of the bag.

After separation had been achieved, quite a bit of skill was required to remove the bag from the astronaut’s rear end without letting any solid waste escape from the bag. Because of this, “floating turds” around the cabin were common whenever the Apollo bags were put to use. (See: Where No Fecal Matter Has Gone Before)

Before sealing the bag shut, the astronaut had to squirt a packet of germicide into the bag, then seal the bag and thoroughly knead the germicide into their waste to be sure that the two were thoroughly mixed together. Reason: to prevent gas-producing bacteria from growing inside the sealed bag, which might eventually cause it to explode like a tiny bomb, spraying human waste all over the interior of the spacecraft.

As if kneading one’s own human waste like bread dough wasn’t bad enough, for some reason NASA saw fit to make the Apollo bags out of clear plastic, leaving nothing to the astronaut’s imagination.

Using an Apollo bag and cleaning up afterward could take as long as an hour, and more than one Apollo astronaut preferred to strip completely naked rather than risk getting the mess on their space suits.

The race was on to find a fix for the space shuttle’s toilet and save the secret mission from ending prematurely. The engineers at Mission Control dragged out a toilet that was identical to the one on board the Discovery, and quickly assembled a collection of all of the tools that the astronauts had at their disposal. Then they called in the engineering team that had designed the toilet and put them to work finding a way to fix it, using only those tools.

It took a few hours, but the engineers did manage to diagnose the trouble and come up with a fairly simple fix: the astronauts were instructed to remove the front cover of the toilet and use a vise grip (a pair of pliers with locking jaws) to open and close the malfunctioning valve manually whenever they had to go.

Problem solved! The rest of the mission went off without a hitch (as far as we know, anyway) and five days later, Discovery landed on schedule at Edwards Air Force Base in California. Discovery remained in service until 2011, and over its lifetime it flew 39 missions in all, more than any other space shuttle. It launched the Hubble Space Telescope into orbit, went on more than a dozen missions to construct and supply the International Space Station, and was sent on two more secret missions for the Department of Defense. Today it’s on display at the Smithsonian Institution’s National Air and Space Museum annex in Chantilly, Virginia.

Many of the NASA engineers who were on duty in 1989 have moved on to other things, but many can’t help but remember the incident whenever November rolls around. Wayne Hale was one of the flight directors who was there; in a 2009 posting to his blog he wrote, “Every Thanksgiving now, sometime after the pie and before the football game/nap, I chuckle as I remember that episode. And give thanks for gravity and the three toilets in my house.”

The space shuttle Discovery wasn’t the only spacecraft to have bathroom problems. Here are two more: