Where the Water in the Devil’s Kettle Goes 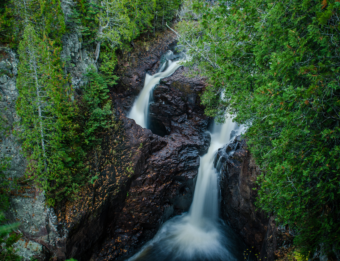 In Judge C. R. Magney State Park in Minnesota, there exists a natural phenomenon along the Brule River known as the Devil’s Kettle- a waterfall that splits in two, with one half falling about 50 feet into the river below and continuing on its merry way towards Lake Superior and the other half falling into a large hole in the ground that seems to go nowhere. In fact, local legend posits that anything thrown into the Devil’s Kettle will never be seen again. People trying to disprove this have thrown everything from boxes of ping pong balls to giant logs into the hole to see where they end up, with nothing ever seeming to emerge anywhere nearbye.  So where is the stuff thrown in going?

For many years, the most popular hypotheses put forward were that the water falling into the hole either flowed into a hidden underground limestone cave carved into the rock by eons of flowing water or it flowed into a lava tube.

If you’re unfamiliar, a lava tube is pretty much what it sounds like- a large tube formed by flowing lava as it cools. In a nutshell, as the top layer cools and hardens, lava underneath potentially continues to flow for some time until the source of the lava stops. This can lead to that inner layer of lava draining and leaving behind a large empty tube in a lava rock shell.

Thus, the hypothesis is that the falling water cut through the surface rock at some point and fell into an ancient lava tube formed at the same time as the rest of the volcanic rocks in the area.

This sounds perfectly plausible, but the issue is that while rhyolite, which forms the bedrock on top of which the river system is located, is a volcanic rock, it doesn’t form lava tubes. And as for the basalt layer underneath, while this can form lava tubes, this particular type is flood basalt, which comes up from fissures, rather than flowing down from a volcano. Thus, flood basalt is incredibly unlikely to create lava tubes (more typically just creating large seepage sheets of rock) and no such lava tubes have ever been discovered in the area, despite many known lava beds in the region.

As for the other popular hypothesis, this is that there perhaps is a large underground limestone cave or river system the water drains into. However, the nearest limestone deposits to the park are hundreds of miles away and rhyolite is much too hard of a rock for such a cave system to likely have formed in it.

Despite these two hypothesis thought to be unlikely by most, they were long the best guesses simply because nothing anyone ever threw into the hole ever came back out. So it must be going underground somewhere… And as the saying goes, “When you have eliminated the impossible, whatever remains, however improbable, must be the truth.”

On that note, over the years scientists and common-folk alike have conducted dozens of experiments to determine where the water was going. These experiments have ranged in sophistication and scope, but mostly boil down to the age old “hucking an object into the hole and trying to find it later”. One of the more famous such experiments involved pouring hundreds of ping pong balls into the hole onto which a phone number was etched with a message that anyone who found one and called in would be given a reward. Not a single ball was found by the experimenters and nobody ever called in to say they’d stumbled across one.

Similar experiments that likewise ended in failure have involved throwing in everything from dye packs to GPS trackers. One person even dragged a bunch of large logs to the top of waterfall and threw them in; a few days later a couple were observed floating around inside the Devil’s Kettle and the rest had, seemingly, disappeared.

This isn’t even mentioning the countless random objects thrown into the hole by tourists. (For the record, people are asked not to do this, but it doesn’t really stop them.) Along with the items you’d expect, like loose change and twigs, there are local legends suggesting that people have thrown televisions, refrigerators and even a car into the hole. However, given the general inaccessibility of the area, these more fantastical stories are mostly thought to be apocryphal.

On that note, contrary to rumors floating around on the internet, we couldn’t find a single known example of someone either falling into the Devil’s Kettle or of somebody dumping a dead body into it.

So what exactly is going on here? It turns out a whole lot of nothing. Early in 2017 the mystery of the Devil’s Kettle was finally solved when a hydrologist working for the Minnesota Department of Natural Resources, Jeff Green, and retired Minnesotan professor Calvin Alexander deciding to do something that had apparently never occurred to anyone prior despite it being a ridiculously obvious thing to do in investigating the phenomenon- they measured the volume of water flowing in the river immediately above and below the waterfall.

And for those who would prefer the numbers line up perfectly, we can at least definitively say from Green and Alexander’s measurements that nowhere close to half the water can possibly be disappearing into a big hole to nowhere. All evidence would seem to indicate it’s simply disappearing into a hole briefly before coming out the other side to rejoin the other water.

This might all have you wondering then where all the stuff thrown into the hole went. Well, Alexander’s hypothesis is that

The plunge pool below the Kettle is an unbelievably powerful system of recirculating currents, capable of disintegrating material and holding it under water until it resurfaces at some point downstream.

In other words, stuff thrown into the Devil’s Kettle doesn’t get dragged to a mysterious underground cave or lava tube- it just gets obliterated by thousands of tons of falling water smashing it against rock, or otherwise doesn’t resurface until well down stream, effectively making it seem to disappear.

In order to silence the remaining doubters, when the flow decreases this coming fall, Green and Alexander plan to dump a whole lot of dye into the river above the waterfall. Unlike previous attempts at this, they plan to use a dye that is visible at 10 parts per billion. Combined with the decreased flow, this should be readily visible on the other side.