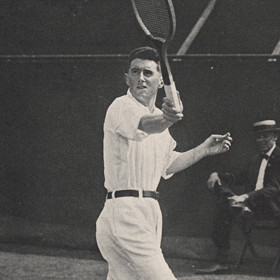 In the early morning of April 15, 1912, 21-year-old Richard “Dick” Norris Williams II was washed off the deck of the doomed RMS Titanic and into the icy water of the North Atlantic. Rescued by a lifeboat, but almost up to his waist in near-frozen water for several hours, Williams suffered such extreme frostbite that medical personnel wanted to immediately amputate his legs; instead, Williams decided he liked his legs where they were and went on to make rather good use of the appendages.

Born on January 29, 1891 in Geneva, Switzerland to American parents (in fact, his father, Charles Duane Williams, was a descendant of Benjamin Franklin), Williams had a privileged childhood, studying at an exclusive Swiss boarding school and later being admitted to Harvard.

He was traveling with his father (an accomplished tennis player in his own right and whose efforts in part led to the creation of the International Tennis Federation), when they boarded the Titanic (as first class passengers) in Cherbourg, France to sail to America to participate in a tennis tournament. (The year before, Williams had won the Swiss Championship.)

After the Titanic hit the iceberg on April 14, but before anyone was too worried, Williams was passing a stateroom where a steward was unable to open the door to free the panicked passenger inside. Williams broke down the door and freed the passenger; but ignorant of the impending tragedy, the hapless steward was more concerned with property damage – to the point that he threatened to report Williams to the White Star line.

After this, to pass the time while the ship was sinking and to keep warm, father and son headed for the gym. Ultimately Williams did leave the ship, however. As for this, while it’s clear by all accounts that he was eventually washed from the floundering Titanic, some provide that just before this, Williams witnessed his father’s death, and that the older Williams was crushed (along with several others) by a collapsing forward funnel. However, there doesn’t appear to be any direct quote from Williams himself that has survived to today describing this aspect of the story, other than that he very clearly states that his father was not with him after he was thrown from the ship.

Whatever the case, once in the icy water, Williams later recounted,

After we hit the water the Titanic rebounded and I was hurled through the air, and clear away from the boat, beyond the suction zone…. I was not under water very long, and as soon as I came to the top I threw off the big fur coat. I also threw off my shoes. About twenty yards away I saw something floating. I swam to it and found it to be a collapsible boat [Collapsible A]. I hung on to it and after a while got aboard and stood up in the middle of it. The water was up to my waist. About thirty of us clung to it. When officer Lowe’s boat [Lifeboat 14] picked us up eleven of us were still alive; all the rest were dead from cold.

Later, Williams found himself aboard the RMS Carpathia, the Cunard Line steamship that responded to the Titanic’s distress signal and ultimately saved approximately 700 lives. (Interestingly, there was another large ship that was actually within visual range of the Titanic when it was going down. However, owing to the fact that their radio operator had gone to sleep for the night and the captain chose to ignore the emergency flares coming from the Titanic and the weird way it was sitting in the water when they were discussing the matter, that ship didn’t bother going to help. More on this in an upcoming article.)

Back to Williams- the problem for him was that, beyond having to endure the frigid night sopping wet from his little dunk in the ocean, as he mentioned, his legs were still submerged in water in the lifeboat. The result was that when the Carpathia’s doctor saw his legs, he strongly recommended they be amputated.

Refusing to let his burgeoning tennis career be cut short, however, Williams declined the offer despite the potential risk to his life. Instead, he simply did his best to get the blood flowing again, hobbling around as best he could until he needed rest and then sleep. Even then, he’d religiously wake up every two hours to walk around with the hope that the added blood flow would allow his legs to heal. Ultimately as the strength in his legs returned, he continued to ramp up his physical activities every day until all was back to normal.

His efforts paid off- within a year Williams became the intercollegiate tennis champion in singles, playing for Harvard, and went on to win it again in 1915. (He also won for doubles in 1914 and 1915).

Williams’ most famous tennis wins include singles titles in the U.S. Championships in 1914 and 1916, doubles champion at Wimbledon with Chuck Garland in 1920, Olympic Gold medalist in 1924 with Hazel Hotchkiss Wightman in mixed doubles, and he was a member of champion Davis Cup teams in 1925 and 1926.

But tennis wasn’t the only place he put his legs to good use; Williams served in the U.S. Army in World War I, and was granted awards from France for valor including the prestigious Croix de Guerre and Legion of Honor.

He was ultimately inducted into the International Tennis Hall of Fame in 1957 and died on June 2, 1968 in Bryn Mawr, Pennsylvania at the age of 77.