The Curious Case of Taiwan’s #2 Restaurant 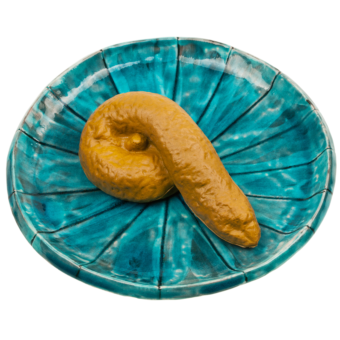 You’ve probably never heard of the Japanese comic-book character Arale Norimaki. She’s a purple-haired robot teenager whose favorite hobby is “poking poop with a stick.” Arale Norimaki has a huge following not just in Japan, but in other parts of Asia as well, including Taiwan. That’s where, in 2004, a 26-year-old banker named Wang Zi-wei was inspired by Norimaki’s poop-poking example to go into the soft-serve ice cream business. (If you’re at all squeamish, you should probably stop reading right now and turn to another page.)

What’s even stranger than the way Wang’s mind works is the fact that his business instincts were dead-on. His human-waste ice cream stand was a big hit—customers not only lapped up all the “diarrhea with dried droppings” (chocolate ice cream with chocolate sprinkles), “bloody poop” (strawberry ice cream), and “green dysentery” (kiwi ice cream) he served, they pestered him to come up with more similarly themed treats.

After four months of working in the bank by day and selling his frozen fecal confections by night, Wang decided to expand. “The success with ‘toilet ice cream’ was a leap of faith for me to quit the stable, but boring, banking job and start my business, despite strong objections from my family,” Wang said. In May 2004, he opened what would become the first location in the Modern Toilet restaurant chain. 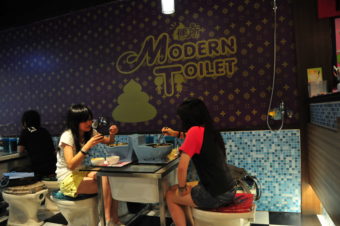 If you’ve never had an opportunity to dine in a Modern Toilet, it’s pretty easy to conjure up a mental image of what one looks like.

Picture a large public restroom, say one at an airport or a shopping mall. See all those bathroom stalls? Take the stalls out…but leave the toilets, and then keep adding more toilets until you have about 100. Now arrange them tastefully around bathtubs and sinks that have been covered with glass tabletops. Now hang some showerheads and shower curtains from the ceiling, and install some urinals on the tiled walls to serve as light fixtures. Need a napkin? Help yourself to the toilet paper dispenser on your bathtub/table. That’s pretty much what the chain of Modern Toilet restaurants look like.

“Go Pee-Pee or Go Poo-Poo?” That’s the Modern Toilet way of directing you to the beverage (Pee-Pee) and food (Poo-Poo) sections of the menu. There are plenty of entrées to choose from; if Modern Toilet Beef Curry (served in a toilet-shaped bowl) doesn’t strike your fancy, there’s always the Japanese Milk Hot Pot, the Texan Chicken, or the No. 2 Double Surprise Banquet Combo (Korean beef and German smoked chicken with cream sauce), also served in little toilets. Appetizers, such as the Fun Platter (California potato fries, onion rings, and popcorn chicken), are served in tiny bathtubs.

If you prefer your beverage hot, it will be served in a plain mug. Too boring? Order your drink cold, and it will be served in your choice of either a plastic “urinal bottle” similar to those used by bedridden hospital patients, or in a miniature plastic urinal that looks disturbingly like the porcelain fixtures in the Modern Toilet men’s room. Bonus: When you’re finished with your meal, the urinal (or the urinal bottle) is yours to keep!

Did you manage to keep your dinner down? Is there still room for dessert? The dessert menu has been expanded from soft-serve ice cream to include a dozen varieties of shaved ice. Yes, they even serve yellow snow.

A WORD OF ADVICE

As with any well-designed restaurant, the restrooms at Modern Toilet are clearly marked. But since the entire restaurant looks like a restroom, if nature calls be sure to ask for directions to the restroom and listen very carefully when they are given. If you have any doubts as to whether you really are in the restroom, as a courtesy to other diners, please confirm that you are where you think you are before using the toilet for its intended purpose. 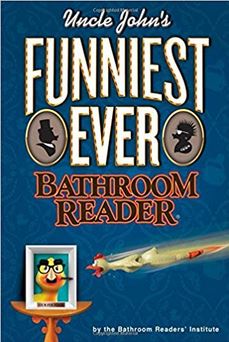