When Did People Start Making Bread? 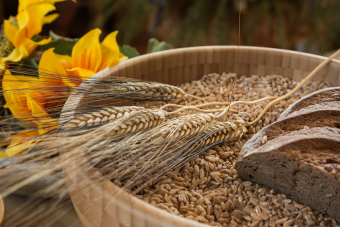 We hope you get a rise out of this story—it cost us a lot of dough to put it together, but it was the yeast we could do!

Did you eat a sandwich today? Did you have an English muffin this morning or a slice of pizza last night? Americans eat 34 million loaves of bread per day, not to mention rolls, baguettes, bagels, croissants, pitas, doughnuts, and dozens of other kinds of bread. Bread is thought to be the first processed food in human history, and it’s still the world’s largest single food category—more people eat some form of bread on a daily basis than any other food product.

Most bread falls into one of two groups: leavened, which rises with the help of an ingredient (yeast is the most common leavening agent) and unleavened, which is basically flat. Many flat varieties—for example, Mexican tortillas, Jewish matzo, Norwegian flatbrød, or Indian chapati—have remained virtually unchanged for thousands of years. But the history of bread is really about the flatbreads that did change—and evolved into the leavened loaves we know today.

The history of bread begins with wild grain. Around 11000 B.C. huge fields of grain appeared in southwest Asia as the glaciers began to retreat. Nomadic people ate the raw seeds (in addition to whatever else they could gather).

By about 8000 B.C., people had learned that the seeds could be planted and cultivated, that they would yield reliable crops, and that families could be fed from those crops. It was the beginning of agriculture; traditional nomadic life evolved into settlements (after all, if you’re going to raise crops like wheat, barley, spelt, rye, and oats, you’ve got to stay put). And with the introduction of the mortar and pestle for grinding the grain into flour, most of these early agrarian cultures invented some kind of bread—flat, coarse, and probably not very tasty, but they were sustaining and they lasted longer than foods that had to be hunted or gathered daily.

The next few thousand years saw all kinds of agricultural developments that helped make bread a staple food: Farmers along the Euphrates River in the Middle East invented plows and irrigated fields around 4000 B.C.; the Sumerians invented a sickle for harvesting grain; farmers in northern China learned to cultivate wheat and barley strains that tolerated low rainfall; and in eastern Europe, where the growing season is too short for wheat, rye became a major crop.

CIVILIZATION ON THE RISE

Around 2000 B.C., the Egyptians hit the jackpot: They discovered leavening, the ingredient that makes bread rise. The discovery probably came about by accident, when airborne wild yeast spores got into some bread dough. Yeast is a living microorganism that occurs naturally in the environment—on plants, in the soil, and on animals. And under the right conditions (warm liquid, and sugar or starch to feed on), it will grow and produce carbon dioxide, which, in the case of bread, bubbles through the dough and makes it rise. And that’s what makes bread light and fluffy. (Wild yeast was also noted for its ability to ferment the sugars in grain. The by-product of fermentation is alcohol, which made another food possible—beer, which the Egyptians valued highly.)

The Egyptians also figured out how to use two stones for grinding grain to make flour with a much finer texture than the old mortar and pestle had yielded. Egyptians were expert wheat growers, but it was a labor-intensive crop, which made wheat flour expensive to produce. Result: Common people ate cheaper, coarser, darker, flatter barley bread; the wealthy ate finer, whiter, fluffier wheat bread.

One more Egyptian innovation: Flat stones or griddles were used for baking flatbreads, but the Egyptians had a class of professional bakers who used cone-shaped clay ovens, with which they could control the heat for making leavened bread.

Around 600 B.C., Phoenician sailors brought Egyptian flour and bread technology to Greece. The Greeks already had a bread-baking culture, but they quickly adopted the Egyptian improvements and soon Greek states vied with each other in bread-making skill (Athens claimed to be the best). They further advanced the development of bread through the use of a Greek invention: the front-loading oven, an improvement over the Egyptians’ top-opening version.

From Greece, bread know-how spread west to Rome. The Romans considered bread even more important than meat, and it was a stabilizing factor in the smooth running of the Roman welfare state: Grain was distributed to the populace of Rome (later the government even baked the bread), and Roman soldiers were adamant about receiving their full allotment of bread.

The expansion of the Roman Empire northward took Greek bread-baking techniques throughout Europe. But with the decline of the Empire around 400 A.D., the quality of bread-making skills declined, too, and unleavened bread became the norm again. During the first half of the Middle Ages (400–1000 A.D.) bread history gets a little hazy, but the Normans are believed to have reintroduced leavened bread to England in the 12th century, and by the 13th century all of Europe again had better flour, better bakers, and better bread.

Milling and baking soon became highly skilled professions, making millers and bakers influential and rich. Bakehouses (the medieval term for “bakeries”), with their large ovens, were serious fire hazards, so they were built far from the shops where the bread was sold. The bakehouses usually belonged to feudal lords, who allowed bakers to use the ovens for a fee or in exchange for bread. Gradually bakers began setting up their own bakehouses (sometimes communally owned), and forming guilds to protect themselves from the lords and to regulate bread production.

THE ROLL OF LAW

In 1266 England established the “Assize of Bread,” a set of laws regulating the weight and price of bread. Because bread was such an important staple, bakers were in a position to take advantage of consumers by price gouging. These laws regulated bread prices in relation to the price of grain. If a baker broke those laws (they were in force until the 19th century), he could be punished severely, even banned from baking for life. The penalties were so severe that bakers got into the habit of giving an extra measure of bread (13 instead of 12) so they couldn’t be accused of short-changing customers, which is the origin of the term “baker’s dozen.”

During the next few centuries, bread continued to be the staple food of most people’s diets, and since the majority of people were poor, it was a heavy brown bread made from the cheaper grains—barley, oats, or rye. But because people had become so dependent on bread, governments and rulers survived and flourished only if they could supply enough bread to their people…or control the rebellions that broke out when they couldn’t. Example: The storming of the Bastille in Paris, which set off the French Revolution in 1789, began with a bread riot.

In the 1800s, most bread was still baked with homegrown (or brewery-grown) yeast. It was time-consuming to nurture, and performed unpredictably. In 1825 German bakers introduced packaged cake yeast that made home baking easier, and made the results more consistent (and tastier). Two Austrian brothers, Charles and Max Fleischmann, brought the innovation to America. In 1868 they opened a factory for the commercial production of compressed yeast in Cincinnati. (Fleischmann’s is still the biggest producer of yeast for home baking, but home baking isn’t what it used to be—by the 1960s almost all of America’s bread was made commercially.)

By the late 19th century, the Industrial Revolution was in full swing, and gas-fueled ovens had replaced wood- and coal-burners. With the European invention of more efficient steam-powered flour mills, it became possible to produce enough wheat flour so that for the first time, white bread was affordable to most people. At the same time, the newly developing heartland of America was producing so much wheat that huge amounts of bread could now be turned out efficiently in industrial-scale bakeries. By the early 1900s, factory-made white bread was available all across Europe and North America.

In turn-of-the-20th-century America, bread was an assembly-line business, with conveyor belts moving loaves through the ovens and into the hands of workers who wrapped them in waxed paper. In 1928 American Otto Frederick Rohwedder perfected a machine that both sliced and wrapped loaves of bread. Streamlined machinery, consistent products, and constant availability were the pluses—but there were minuses to the new technology, too. The most significant one was that the grain’s nutrients got stripped away during the exhaustive process of milling the flour.

Even in the late 19th century, it was clear that for people who depended on bread for good nutrition, bread made with nutrient-poor flour wouldn’t give them what they needed, so European governments began to require manufacturers to enrich the flour. (America followed suit…eventually. In 1941 Congress passed a law requiring the addition of niacin, thiamine, riboflavin, and iron to white flour and bread.) Ironically, at the same time that bread manufacturers were investing in the technology that made white bread affordable, other technological advances made it possible for farmers and distributors to supply other important foods—meat, dairy products, and potatoes—that threatened bread’s status as the number-one staple food.

WHERE HAVE ALL THE FLOURS GONE?

The middle of the 20th century saw the flourishing of corporate bakeries—Continental Baking (Wonder Bread), Pepperidge Farm, and Oroweat, for example. As the century progressed and people became intrigued with “health” foods, corporate bakeries responded with whole-wheat and other breads containing “healthful” ingredients like honey and molasses. Homemade bread made a comeback, too, as consumers wanted to make “somethin’ lovin’ from the oven” at home. So the corporations came up with packaged mixes, frozen breads, and “heat-and-serve” products that simulated home baking without too much fuss and bother.

Americans now eat 51 one-pound loaves of bread per person annually—about one per week. There’s no question that we still consider it to be a vital part of our diets. Packaged bread from a supermarket may supply some of your dietary needs because it is enriched, but commercial breads are routinely treated with preservatives, emulsifiers, stabilizers, and dozens more chemicals in order to provide loaves that are cheap, shippable, and have a long shelf life. Small wonder that contemporary bread-lovers seek out neighborhood bakeries that make their own fresh, delicious baguettes, ciabattas, and other varieties of old-fashioned “artisan” bread.