February 28, 2017 Melissa One comment
Simon H. asks: What civilization made the rock walls in Rockwall Texas? 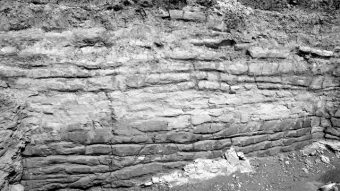 Image Courtesy of the City of Rockwall, Texas

Manmade or a natural feature, the miles of seemingly neatly stacked, often-buried stone that sometimes reach 40 feet in height and transverse above and below the ground of Rockwall County, Texas are intriguing. Unfortunately for those who love to read up on ancient civilizations, on the whole the vast majority of geologists think that this formation resulted from purely natural processes, rather than constructed by a long-lost, ancient people.

The existence of the “walls” was first discovered in 1852 when Benjamin Boydstun, Terry Utley Wade and William Clay Stevenson were digging a well. Over the years, other similar formations have been found in the area, either already exposed or similarly excavated, across a roughly rectangular 20 square miles of Rockwall County.

From the beginning, scientists have claimed that the feature is natural, such as when geologist Richard Burleson, in 1874, opined that the exposed sections he examined were “igneous occurrences.” Similarly, after he viewed the formations in 1901, geologist Dr. Robert T. Hill classified them as clastic sand dykes, while in 1909, Sidney Paige agreed with Hill, and described the feature as “a number of disconnected sandstone dykes.”

Of course, even experts can disagree, and when archeologist Count Byron de Prorok examined a portion of the feature in 1925, he concluded it was man-made. Likewise, after architect John Lindsey studied the wall in 1996, he opined that “evidence of a prehistoric structure built by man is mounting.”

Building on Lindsey’s opinion, geologist James Shelton wrote An Unsolicited Plea for Assistance in Reevaluation of the Rockwall Co., Texas – Rockwall Anomaly. In the paper, Shelton points to the fact that “linteled portals and archways” were documented along the walls, and openings on the wall that “resemble windows or conduits for water” have also been observed, as was a stone-lined passage that led to a “vaulted chamber.”

Shelton also identified that in 1949 a piece of the feature had been excavated that appeared to have “an ancient script on it,” and the script reportedly matched that found on a copper coin that had been augered up from 200,000-400,000 year-old dirt from a well in Illinois in 1870 (today that coin is said be stored at the Smithsonian Museum).

Of course, none of this actually means the wall was man-made. It’s possible man simply modified the existing natural formations to accommodate their own particular uses.

Less speculatively, more recent analysis of a portion of the wall by forensic geologist Scott Wolter and Dr. John Geissman in 2013 determined that the feature was made via “fluid sand at depth rising up through fractures of the overlying hardened clay…” and, “What looked like mortar between the stone blocks was actually sandy-clay from the surrounding rock that had squeezed between blocks.”

Wolter and Geissman did note, however, that the process was “unique to say the least. . . . What was truly amazing is how the fractures formed within sandstone . . made it look just like stone blocks in a masonry wall.” But ultimately, Wolter and Geissman were convinced it was natural by, among other things, the fact that when core samples were taken, all of the rocks were magnetized in such a way as to strongly indicate they were formed in place, rather than made and put there.

Shelton, however, has an answer for that. According to him, the ancient people could have used “cast instead of cut stone,” meaning a form of prehistoric cement that was formed into blocks. In support, Shelton noted that other megalithic sites across the ancient world were similarly constructed of cast stone. However, it is difficult to find other authorities in the field who concur with Shelton’s opinion. Rather, most agree with Gleissman and many other’s assessment of the rock wall being a natural phenomenon.