The Origin of the Red State/Blue State Dichotomy 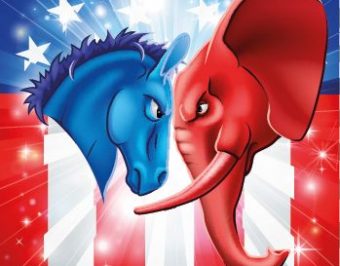 So ubiquitous in today’s political discourse, many assume that the red state/blue state distinction has been around as long as we have had Republicans and Democrats. In fact, the opposite is true – the dichotomy is relatively young, having only become settled with the Presidential election of 2000.

The Color of Political Parties

In order to make political reporting more interesting, and to help viewers more easily discern the leanings of a particular party, colors are often assigned according to the party’s ideology.

Because of its association with Mussolini’s Camicie Nere (Blackshirts) as well as Hitler’s Schutzstaffel (SS), internationally black typically designates a fascist or anarchic party. In the 1960s and 70s in the U.S., however, the socialist Black Panther Party (BPP) adopted black for its color.

Unlike in the USA, conservative parties internationally are typically identified with blue. This tradition is reputed to have begun in Great Britain where the Tories adopted blue as their color circa 1900 in response to Labour’s use of red.

In the Muslim world, because green was Mohammed’s favorite color, it is frequently adopted by Islamist political parties. Hamas, the Kingdom of Saudi Arabia and the Islamic Republic of Iran all use green on their flags.

In other places, particular Western Europe and the Americas, green is used to designate environmental parties, such as the Green Party of the United States.

As with blue, the rest of the world typically uses red to designate a more liberal, left-leaning party, including everything from progressive and pro-labor parties to socialists and communists. This tradition apparently began with the French revolution of 1848, when a red flag was used to “represent the blood of angry workers.”

Party Color in the USA

Consistent with international usage, until quite recently conservative groups in the United States were affiliated with blue, and left-leaning groups were designated red. So well-accepted were these denominations that following the Bolshevik Russian Revolution of 1917, and then again during the 1950s when Senator Joseph McCarthy conducted a witch hunt against supposed American communists, these events were known as the 1st and 2nd Red Scare– times when the “right” were “scared out of their wits”, according to two time Pulitzer Prize winner Walter Lippmann (who incidentally was the first to outline the concept of the “Cold War”, as well as introduced the modern psychological definition of “stereotype”, which previous to his usage was primarily a printing press term for a duplicating printing plate).

Red remained a pejorative in American political discourse throughout much of the 20th century because of its association with communism, and neither party would voluntarily associate with it. As NBC’s Chuck Todd said:

For years, both parties would do red and blue maps, but they always made the other guys red . . . . During the Cold War, who wanted to be red?

Things began to change when the ability of news outlets to display graphical information leapt forward in the 1970s. When reporting the results of the Presidential election of 1976, Time magazine’s electoral map designated states won by Republican Gerald Ford as white and those won by Democrat Jimmy Carter as red; however, for the next election (1980), Time’s editors had switched the colors, such that states won by the Democratic incumbent were white and those won by Republican Ronald Regan were red. Presumably, the more vibrant color was intended to identify the winner of the election, rather than its ideology.

For its coverage of the 1980 Presidential election, NBC’s broadcast included an electoral map that designated states carried by the Republican candidate as blue and those won by the Democrat as red. Anchor David Brinkley described Reagan’s landslide victory of that year by referencing the graphic: “It’s beginning to look like a suburban swimming pool.” NBC maintained these colors for the respective parties until the Presidential election of 2000.

The other networks forged their own paths when covering Presidential elections. In 1976, ABC used blue for states won by the Democratic candidate and yellow for the Republican, but by 1984, it had switched the Republican color to red. CBS designated Democratic wins with red and Republican with blue in 1980, but then flipped them in 1984. As Vice-Presidential candidate for the Democratic party, Geraldine Ferraro described the reporting of the 1984 election: “One network map of the United States was entirely blue for the Republicans. . . . On another network, the color motif was a blanket of red.”

The Presidential election of 2000 was a doozy. Like the recent contest of 2012, the country was nearly evenly divided in the popular vote, and prognosticators were all over the map with their predictions. Political coverage leading up to the election dominated both broadcast and cable news.

By this election, NBC had settled on blue to represent states won by Democrats and red to designate those won by Republicans. Tim Russert (the popular and respected moderator of Meet the Press) regularly appeared on NBC’s then top-rated Today show to analyze the contest; it is rumored that he coined the terms “red state” and “blue state” on its October 30 broadcast.

Coverage continued unabated through the election on November 7, and that’s when things really got interesting. The race was too close to call, particularly in Florida. The Sunshine State’s 25 electoral votes would put either candidate over the 270 threshold needed to win the Presidency. Because the candidates were separated by merely 900 votes on the first count, a mandatory recount was ordered, which became a hand count in four counties. While we obsessed over hanging chads, the electoral system and Katherine Harris, television broadcasters repeated the red state, blue state mantra ad nauseum. By the time the Supreme Court crowned George W. Bush the 43rd President of the United States on December 12, 2000, in Bush v. Gore, the dichotomy was ingrained in the American psyche.

Today, if a reporter uses any other color scheme to describe the electoral landscape of the US, it is considered a grievous error. As one journalist for Slate who purposely reversed the colors and had to correct his story put it: “I didn’t realize it had become so official. . . . I must have missed the memo.”