Sporting the third deepest natural harbor in the southern hemisphere and a rich habitat, the waters around Eden, Australia attract a variety of wildlife, including baleen whales and, at least in the fall and winter, orcas.

At some point in the history of the indigenous Yuin people, they and the killer whales seemingly entered into a tacit sort of unspoken agreement, which was called by later whalers the Law of the Tongue.

While most of the contemporary accounts of this peculiar “contract” have been lost, including very unfortunately a 1910 film by C.B. Jenkins and C.E. Wellings that visually recorded the behavior, enough remain, along with some photographic evidence, to give us a general idea of how humans and a particular pod of orcas worked together to bring down baleen whales.

While little is known of when exactly this “agreement,” of sorts, came about, and how it may have differed for the Yuin people, after European hunters arrived in the mid-19th century, the provisions of the “contract” became clear – the killer whales would herd in and trap the baleen whales in Twofold Bay and then the hunters would harpoon the whales. In return for their help, the humans would share certain parts of the bounty with the orcas.

How was this possible? Extremely intelligent, creative and social animals, killer whales often live in large, matriarchal, multi-generational pods. Importantly to the subject of this article, they also teach their offspring their sometimes incredibly clever hunting methods, passing the knowledge on from one generation to the next. Presumably at some point in this pod’s history, humans killing baleen whales near the harbor resulted in the orcas coming in for scraps; perhaps ultimately realizing that if they helped the humans out in their hunting, there would be more scraps, the orcas began driving the whales close to shore.

It is often stated that even as late as 1860, when Alexander Davidson and his family established a whaling station in Eden, Europeans still had not realized the orcas’ value, and that it was Davidson who learned what the orcas were doing when he hired Yuin fishermen who explained it to him. However, according to an account written in Sir Oswald Brierly’s diary some two decades earlier while he was managing a whaling operation in the area, he, at least, was well aware of the orcas’ propensity to drive the baleen whales in. He noted that while some whalers would fight the orcas away after killing a whale, others let them have their spoils and soon “aquire[d] preferential treatment” from the pod.

After the little whaling empire of Scotsman Benjamin Boyd went under and he left the region, the Davidson family’s whaling business began to flourish thanks to the orcas. Beyond the Davidsons treating the orcas fairly, there are reports that the killer whales weren’t too keen on helping many other whalers still in the area owing to their eventual use of cannon harpoons and other such explosive weapons. In contrast, the Davidson’s used hand thrown harpoons and took to revering the orcas as the natives did, through their actions supposedly earning the orcas’ trust. 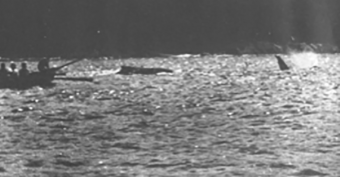 Whatever the case, eventually, the system was refined, making the Davidson’s lives relatively easy. At the mouth of Eden’s Twofold Bay, the orca pod, like sheep dogs, would herd any baleen whales they encountered closer to the shore. After the whale was trapped in the harbor by the pod, a large male, for many years “Old Tom”, would break off and go present himself at the Davidson whaling station by spectacularly breaching the surface and thrashing his tale until he got the fishermen’s attention- letting the whaler know there was now a baleen in the harbor that needed killing.

Beyond keeping the baleen in the harbor and close to the surface, there is one contemporary journal entry, whether accurate or not isn’t known, describing the orcas actually dragging Davidson’s boat towards their prey before competing whalers could get there:

Davidson threw a [anchor rope] over the bow of his boat. It was immediately grasped by two killers. They took the rope tandem fashion with a half hitch around the shoulder and started for the quarry, overtaking the opposition…

A 1908 picture of a Humpback with its lips and tongue eaten off by the orcas.

As for what specifically the orcas got out of all their efforts, while the carcass of the baleen remained in the water secured to the boat, the orcas would be given time to chow down on the huge and meaty whale’s tongue and lips and then leave the rest of the beast, including the valued bones, more central meat, and blubber, for the whalers.

At this point you might be wondering why an apex predator like the killer whale wouldn’t just kill the baleen’s themselves and take all the spoils? While a sufficient number of orcas can indeed kill such significantly larger prey, the methods employed to do it are arduous. A large orca male can reach 32 feet in length and weigh 9 tons, while a female can grow to 23 feet and weigh 4 tons. While that’s massive by most sea-life standards, by comparison a humpback whale can grow to upwards of 50 feet in length and weigh up to 40 tons. Other baleen whales, like the blue whale, can grow up to 120 feet and weigh up to 200 tons!

To kill such behemoths, an orca pod must be of sufficient size and have all hands on deck rigorously working in unison for a lengthy period of time. As for the general method of execution, trapping the whale between them, some work to deny it access to the surface so that it can’t breathe (by literally keeping on top of it), while others bite and tear at its body. Ultimately between the injuries and its strenuous activity while it tries to escape the orca balling, it will weaken and either die from ceasing to be able to defend itself, with its injuries then rapidly mounting, or at some point just drown, even if it wasn’t otherwise seriously injured.

Given the time and amount of effort required, it is very rare for orcas to kill an adult baleen whale (although calves can often be prey, if it one can be separated from its own group). However, if all the orcas have to do is herd the whale into a particular place and potentially drive it to the surface, the energy expenditure is much less, making the trade-off for only getting access to the whale’s massive tongue and portions of the face after its death worth it.

In any event, by the early 20th century the most famous orca in the pod was its herald, the aforementioned “Old Tom,” who would often be the one to notify the whalers of a catch. And while most inhabitants incorrectly thought Old Tom was the leader of the group, as orcas are generally matriarchal, the real leader is thought today to have been the female called Stranger. Old Tom was simply better known, not just because he was often the herald, but also because of his endearing antics.

For instance, according to Eden fisherman Jackie Warren, Tom would sometimes grab the anchor line for Warren’s boat and tow the boat around randomly for fun.  In another account, Tom supposedly liked to place his body on the rope between the dead baleen and the boat so that the boat would tow him in too, to save himself the effort of swimming along with it.

More helpfully, there are a few accounts of Tom being observed to swim around whalers who’d fallen into the water during a hunt. It was speculated by the whalers that Tom was protecting the human in these instances. This behavior was widely panned at the time in news articles as made up by the whalers, as it was thought that killer whales would simply eat humans if they fell in the water. But today most think the whalers were probably telling the truth as it’s exceptionally rare for killer whales to attack humans and there has never been a single known case of a wild orca killing a human. (There have been cases of captive orcas doing so.) For his efforts, Tom would be described in the journals of the Davidsons as “part of the family,” with Fearless George Davidson himself known to have taken a swim with Old Tom.

According to reports, whether accurate or not isn’t clear, the beginning of the end of this cooperative hunting happened on a fall day in 1923. After Old Tom had corralled a small whale toward George Davidson, fearing a storm that was brewing, George decided to head straight back into shore without waiting to share the bounty with Tom. Old Tom disagreed and the orca and the motorized boat engaged in a tug-of-war, ending when Tom lost a number of teeth and released the rope. The daughter of John Logan, Margaret Brooks, who accompanied her father and Davidson on the boat for this occurrence, stated that upon seeing the damage done to Old Tom’s teeth, Davidson stated “Oh God, what have I done?”

Orca teeth do not grow back, and the holes left behind sometimes become infected. On top of that, as he was missing so many teeth at this point, it is speculated that hunting became more difficult for Tom, and it is often claimed in modern accounts that Tom died shortly thereafter of starvation. 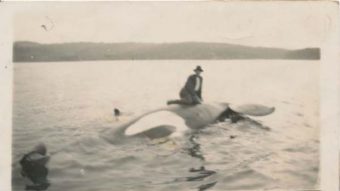 However, while that is the general story told of the end of Old Tom today, it should be noted that he didn’t “die shortly after.” Old Tom actually lived another seven years, dying in September of 1930 of unknown causes.

As to Tom’s teeth, we do know that he was missing several upon his death, but given the number of years he lived after the alleged tug of war match, it’s safe to say he didn’t die as a result of it. It may well be that Old Tom simply died of old age related issues, as contemporary reports describe him as an elderly looking orca towards his end. Later examination of his remains seemed to indicate he was only in his mid-30s, but the method that was used in this case is known to be unreliable. (For reference, orcas can live upwards of 100 years in the wild, though more typically between 30-50 years; in captivity they only live about 20 years or so). And for whatever it’s worth, at least one contemporary account claims Old Tom had been “seen at Twofold Bay for more than fifty years…” prior to his death. 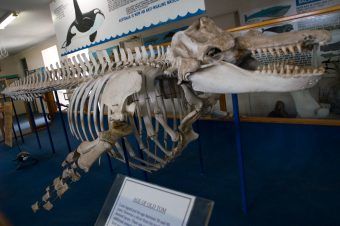 Whatever the case, after Tom’s death, the pod supposedly never returned to Twofold Bay, though it isn’t clear whether Tom’s death had anything to do with this change of behavior.  Even by 1923, the orca pod to which Old Tom belonged seems to have shrunk dramatically in size, or at least only a few of the pod at this stage were seen in the harbor anymore. It was speculated that Norwegian whalers in the area had killed most of them over time, but whether this is true or not isn’t known.

By 1930, whether because the remaining members of the pod decided to stop visiting the harbor or whalers simply wiped them out, with no more of the pod around to drive whales in, Tom’s death more or less marked the end of the Davidsons being able to hunt whales in Twofold Bay via small row boats.

Gone but not forgotten, Old Tom’s body washed up on Eden’s shore, at which point locals saved his bones and built the Eden Killer Whale Museum to house them. If you’re in the area, you can still go see his remains today.