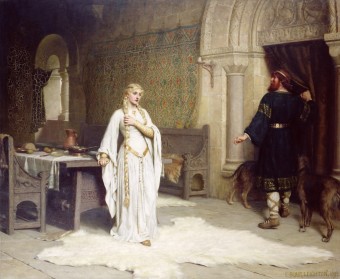 The term “peeping Tom” is used to describe a person who derives some sort of enjoyment – usually sexual – from secretly watching people during their most intimate moments. But who exactly is this “Tom” fellow and why does everyone seem to think he likes secretly watching naked people?

The phrase “peeping Tom” first appeared in the accounts for the English city of Coventry in 1773. Specifically, the accounts note that the city had recently purchased a wig and paint for an oak effigy of “Peeping Tom”, using money from the town’s coffers.  So who was this effigy of?

No real person. “Peeping Tom” is an iconic part of a legend surrounding a real person from the 11th Century called Lady Godiva. This legend states that Lady Godiva once rode through the city’s streets on horseback, totally naked, in protest of her husband’s unfair taxation of the populace.

While exact circumstances surrounding this now mythical ride change depending on which source you consult, the general story is that Lady Godiva asked her husband on behalf of the town to lower taxes. Her husband, knowing his wife’s chaste nature, joked that he would lower taxes if she agreed to ride naked through the streets. Lady Godiva, much to the surprise of her husband, accepted this offer and appealed to the townspeople to avert their gaze as she did the deed. The Lady being popular with her subjects, unlike her husband, the townspeople dutifully locked their windows and doors and Lady Godiva rode proudly through the streets atop a white stallion with only her long, flowing locks covering her more sensitive regions. She then returned to her husband, he, true to his word, lowered taxes for the town.

While Lady Godiva (a.k.a. Lady Godifu or Godgyfu, meaning “Gift of God”) and her husband, the enormously wealthy Leofric, Earl of Mercia, most certainly did exist, as you’ve probably guessed even without supporting facts, historians are in near universal agreement that this ride never happened.

To begin with, the first known reference to the famous ride appeared some two centuries after the Lady in question died, first mentioned in the book, Flores Historiarum (literally: Flowers of History) written by one, Roger of Wendover. Although Roger claimed to have gleaned the contents of Flores Historiarum from the “books of catholic writers worthy of credit”, his version of the legend of Lady Godiva’s ride, which featured knights flanking her and a gathered crowd, rather than people boarding up their windows and letting the Lady pass in peace, is considered to be nothing more than a fabrication of an unsourced anecdote that survived from Lady Godiva’s lifetime. Over the years, this story was taken as fact, and numerous embellishments were added, leading to the versions we know today.

Where exactly the legend of this ride came from is even more perplexing given that, according to every contemporary source from her time, Lady Godiva and her husband, Leofric, were notable philanthropists who frequently gave money, gold and even buildings to the church, and once even paid for the building of a monastery in Coventry.

Another factor that confuses historians about the origin of the legend of Godiva’s naked ride is the fact that, as noted in The Domesday Book of 1086 (a comprehensive record of most every notable person in England and their holdings, written likely within a decade of the Lady’s death), Lady Godiva was in her lifetime one of the few women in the entire country to be a landowner, controlling a number of large estates around Coventry and the surrounding area. This makes it highly unlikely that she would have needed to appeal to her husband to lower taxes as she owned much of the city, and thus would have been the person responsible for setting taxes in Coventry, not her husband.

So where does Peeping Tom come into this? Well the short answer is that he doesn’t, or at least he didn’t until sometime around the 17th or 18th century. The legend of Godiva’s ride remained basically the same as the one previously mentioned until around the 1700s, when some versions began mentioning a man, eventually named Tom. According to these newer versions of the legend, while nearly every townsperson dutifully complied with Lady Godiva’s wishes to avert their eyes as she rode through the town, “Tom the tailor” couldn’t resist catching a glimpse of the Lady in the buff and so drilled a hole in his shutters to watch her ride by.

Tom’s fate differs depending on the version of the legend you read, but most claim that he was either killed or blinded. The reasons for either eventuality range from Tom being struck blind by Godiva’s beauty, killed by God for ignoring Godiva’s request (the Lady in question being explicitly named as “beloved by God” in the earliest forms of the legend), or simply being beaten half to death and blinded by the rest of the townspeople when they found out.

Either way, Tom is a modern embellishment of a story of the legend, with no mention of him in any version of the legend for nearly a half a millennium after its creation. Another thing pointing to “Tom”, at least as a named character, being a relatively modern invention is that the name, “Thomas”, is not Anglo Saxon. “Tom” was, however, a common moniker for a generic man since around the 15th or 16th century in England, which is likely why this particular character was eventually given this name. (It isn’t known when exactly he acquired the name Tom, or what he was called originally. The first documented instance of the character being called Tom didn’t occur until June 11, 1773, when the Coventry annals mention the aforementioned wig and paint for the character’s effigy.)

In any event, in the late 17th century, the people of Coventry began reenacting the Lady’s ride as an annual town event. The Godiva Procession has been happening in the town since around 1677 or 1678 and is still celebrated, albeit sporadically, today. It generally involves an actress riding through the town on horseback, sometimes naked, sometimes not, depending on the sensibilities of the time. Unlike in the legend, the people of Coventry gleefully watch and celebrate the ride. Within about a half century of the start of the Godiva Procession tradition (with the exact date unknown), the people of the town created the aforementioned effigy of Tom, which still exists today, giving us our first definitive mentions of the character.

One potential origin story for the character of Tom has been suggested via the journals of three soldiers who visited Coventry in the early 17th century. They explicitly note the story of Lady Godiva’s ride and also mention her hair, which is covering her breasts and mid-section, offending “wantons glancing Eye”. From the text, it isn’t clear whether they are referring to a peeping Tom figure when mentioning “wanton” or Leofric himself. If the former, this would be the first known reference to a peeping Tom in the story.

Importantly, they also mention seeing a painting of Lady Godiva’s ride which is thought to be a 1586 work that shows a man in a window looking down upon the nude Lady as she rode.  (This man’s presence in the painting was only re-discovered in 1976 after the painting was cleaned and he once again became visible.)  The soldiers, and others from this time, may well have mistook this man for being a random “peeping Tom”, when in fact the man shown is Leofric himself, observing his wife’s lonely procession from a window.

Whatever the case, over the years, the phrase “peeping Tom” became synonymous with the act of watching someone without their knowledge, as well as another way to call someone a pervert. The phrase was first defined in the Classical Dictionary of the Vulgar Tongue written in 1796 as: “A nick name for a curious prying fellow.”

So there you have it, Peeping Tom wasn’t a real person, but a 17th century legend attached to a legend about an 11th century noblewoman that, despite having no basis in fact, persists today in popular culture because it involves a famous woman who got naked in public. We guess people back then weren’t so different than people today, eh?