Jerry Lewis and the Crying Clown 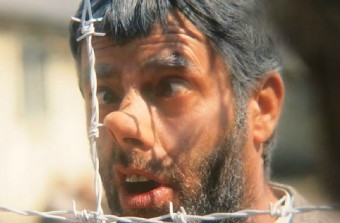 Comedian Jerry Lewis has been entertaining audiences and movie-goers around the world since he first took to the stage at the age of five in 1931, singing “Brother, Can You Spare a Dime?” in New York City. For a decade during the 1940s and 1950s, he teamed up with Dean Martin forming one of the greatest comedy duos in history. Later, he starred in hit films like The Nutty Professor and became an award-winning director. However, not everything Lewis touched turned out well. In fact, at least one major project turned out so badly that, despite the fact that Lewis directed and funded the film in question, The Day the Clown Cried, he has to date made sure almost no one has ever seen it.

Based upon a script by Joan O’Brien and Charles Denton, The Day the Clown Cried takes place during the early years of the Holocaust. Lewis stars as a German Clown, Helmut Doork, who drunkenly insults Hitler and ends up in a Nazi prison camp as a result. He boasts to the other prisoners about his talents as a clown, but the Jewish children imprisoned in the camp next door are the only ones who enjoy his act. Ultimately he is given the chance to have his case reviewed and to possibly be released if he leads the children onto a train to Auschwitz. Unfortunately for Doork, he accidentally ends up stuck on the transport train as well. Once in Auschwitz, he uses his comedic antics to lead the reluctant, but trusting children into a gas chamber… However, once inside, he decides he can’t bear to leave them and so stays, continuing to perform for their amusement until the end.

Producer Nathan Wachsberger approached Jerry Lewis with the script in 1971, and Lewis expressed concern about whether a clown experiencing the horrors of the Holocaust was the right role for him. He was, after all, a comedian. In his biography, he states he suggested to Wachsberger: “Why don’t you try getting Sir Laurence Olivier? I mean, he doesn’t find it too difficult to choke to death playing Hamlet. My bag is comedy, Mr. Wachsberger, and you’re asking me if I’m prepared to deliver kids to the gas chamber. Ho-ho. Some laugh—how do I pull it off?”

But Lewis changed his mind after reading the script in full, which had been bouncing around Hollywood for about ten years before Lewis saw it. Before this, Dick Van Dyke and Milton Berle were approached to star in the movie, but funding only appeared when Lewis became attached to the project as actor and director.

Problems arose almost immediately before filming began. The funding promised by Wachsberger was not nearly enough to cover the cost of production. Lewis decided that his only way to keep filming was to pay for much of the movie out of his own pocket.

On top of all that, when The Day the Clown Cried appeared in trade magazines during early production, it caught the attention of the script’s original scriptwriters, Joan O’Brien and Charles Denton. The pair originally sold Wachsberger the option to make the movie for an initial fee of $5,000 (about $30,000 today), but they claimed the option expired as he failed to send them an additional $50,000 promised if the film went into production. O’Brien went on to state that Lewis was fully aware of the legal situation and that the option had expired. Whether true or not, Lewis moved forward with the movie. 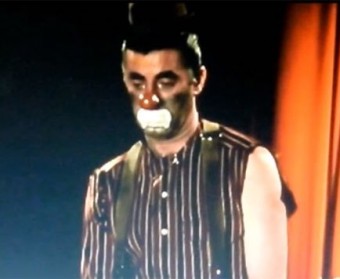 The filming did not go well and the stress involved, Lewis’ addiction to Percodan, and the fact that he went on an extreme Castaway-esk Tom Hanks diet to lose 35 pounds in less than two months to accurately depict the weight loss experienced at the camps all took its toll.

Despite his best efforts, other actors on set also claimed Lewis was never able to move the character beyond his own “Jerry Lewis” persona. This was a major problem. As you might imagine, Helmut Doork performing slapstick comedy didn’t exactly work in a film depicting the atrocities of the Holocaust.  That said, Lewis did state he thought the heartwrenching ending went well,

I was terrified of directing the last scene. I had been 113 days on the picture, with only three hours of sleep a night… I was exhausted, beaten. When I thought of doing that scene, I was paralyzed… I stood there in my clown’s costume, with the cameras ready.  Suddenly the children were all around me, unasked, undirected, and they clung to my arms and legs, they looked up at me so trustingly. I felt love pouring out of me. I thought, “This is what my whole life has been leading to.” I thought what the clown thought. I forgot about trying to direct. I had the cameras turn and I began to walk, with the children clinging to me, singing, into the gas ovens. And the door closed behind us.

A complicated legal battle over the rights to the script and issues with the funding prevented the movie from being released initially. However, Jerry Lewis ultimately reached an agreement with the studio that allowed him to keep possession of the film’s rough cut while negatives remained with the studio. Lewis has claimed in interviews that only he, his father, and his manager have seen the entire film, but comedian and voice actor for The Simpsons, Harry Shearer, claims to have attended a secret screening after someone “involved with the Telethon… liberated [the tape] for a weekend”. Shearer described The Day the Clown Cried in a 1992 interview with Spy magazine,

With most of these kinds of things, you find that the anticipation, or the concept, is better than the thing itself. But seeing this film was really awe-inspiring, in that you are rarely in the presence of a perfect object. This was a perfect object. This movie is so drastically wrong, its pathos and its comedy are so wildly misplaced, that you could not, in your fantasy of what it might be like, improve on what it really is. “Oh My God!”—that’s all you can say.

As for Jerry Lewis’s opinion of the movie, at the 2013 Cannes Film Festival, he said: “No one will ever see it because I’m embarrassed… I was ashamed of the work, and I was grateful that I had the power to contain it all, and never let anyone see it. It was bad, bad, bad…”  However, in an interview with Entertainment Weekly that same year, when asked if he was proud of the film, Lewis responded, “I am.”

Whatever the truth of his feelings, the now 90 year old Lewis recently donated The Day the Clown Cried to the Library of Congress along with other parts of his film-making archive. This particular movie came with the stipulation that it may be shown at the Library’s theater, but screenings could only begin in June of 2024.