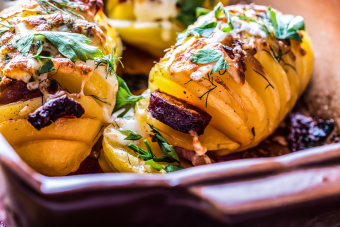 Oh, the poor potato—a symbol of laziness (couch potato) and unhealthy eating (cheese fries). But it deserves much better. Here’s how the lowly potato altered the course of human history.

SPUDS OF THE INCAS

For at least 4,000 years, potatoes have been cultivated in the Peruvian Andes. The Incas called them papas, and although the flowers are toxic (they’re members of the deadly nightshade family), the part that grows underground—the tuber—is one of the healthiest foods humans have ever cultivated. Consider this: The average potato has only 100 calories, but provides 45% of the U.S. Recommended Daily Allowance of vitamin C; 15% of vitamin B6; 15% of iodine; and 10% of niacin, iron, and copper. Potatoes are also high in potassium and fiber, with no fat and almost no sodium.

But the papas that the Incas cultivated looked more like purple golf balls than today’s potatoes. More than 5,000 different varieties grew in the Andes, and there were more than 1,000 Incan words to describe them. The potato was so integral to Incan culture that they buried their dead with potatoes (for food in the afterlife) and measured time based on how long it took a potato to cook.

When the Spanish conquistadors invaded the New World in the 1500s, they resisted this strange new food at first, not wanting to lower themselves to eating anything so “primitive.” But when their own food stores ran low, the Spaniards were forced to eat potatoes. They liked them so much that they brought some tubers back to Europe in 1565.
Europeans balked at what they called the “edible stone.” It was dirty, had poisonous leaves, and tasted horrible when eaten raw (which led to indigestion). The Catholic Church condemned potatoes as “unholy” because there was no mention of them in the Bible. Farmers started growing them, but only to feed livestock. It’s amazing that potatoes ever caught on, but thanks to a few key events, that’s exactly what happened.

The potato’s first big boost in Europe came from Frederick the Great, ruler of Prussia. In the 1740s, Prussia was mired in a war against Austria. Faced with the prospect of his nation’s crops (and food supply) being trampled by invading armies, Frederick urged his farmers to grow potatoes. Why? Because potatoes grow underground. A potato field could be marched over or even burned, and survive, where wheat and barley fields would be devastated.

But the Prussian people didn’t understand why the king wanted them to eat animal fodder, and most refused. So Frederick sent his personal chefs out to travel the countryside and distribute potato recipes to his subjects. When that didn’t work, he issued an edict that anyone who refused to eat potatoes would have their ears cut off. Potatoes caught on relatively quickly in Prussia after that.

But they didn’t in France. Along with most other French people, King Louis XVI reviled the potato. “It has a pasty taste,” wrote an 18th-century French historian. “The natural insipidity, the unhealthy quality of this food, which is flatulent and indigestible, has caused it to be rejected from refined households.”

During the Seven Years War (1756–1763), a French pharmacist named Antoine Parmentier was imprisoned in Germany, where he was fed the same food as the pigs: potatoes. But when he was released, he felt stronger and healthier than before his imprisonment. He credited his health to the potato and became its biggest advocate. Granted an audience with the king, Parmentier told his prison story and urged him to fund a series of potato farms to feed the hungry. Louis was intrigued, but not enough to carry out Parmentier’s grand scheme. Instead, he donated a few acres of the worst possible land near Paris. Historically, nothing would grow there—nothing, that is, until Parmentier grew potatoes. They thrived.

But how would Parmentier convince his fellow citizens to eat them? Knowing that people usually want what they can’t have, Parmentier devised a plan. First, he positioned soldiers around his field in order to “protect” the valuable crop from theft. Second, he instructed the soldiers to take bribes and allow peasants to sneak in at night to steal the spuds. The plan worked, and within a few decades, potato farms became as common as wineries in France.

In 1767 Benjamin Franklin traveled to Paris, where he attended a banquet hosted by Parmentier consisting of nothing but potato dishes. Franklin was instantly won over by their taste and versatility and took some seedlings home to the Colonies, where he gave them to his friend, Thomas Jefferson. Jefferson, too, was enthusiastic about the vegetable and urged every farmer he knew to grow it. Yet even with the statesman’s endorsement, the potato didn’t catch on quickly in the Colonies. The Old World cultural and religious stigmas against it were still too strong.

It was a different story in Ireland. The potato, first brought there around 1590, quickly became one of the country’s main crops. The Irish climate and soil—in many areas too poor to grow grain—were perfect for growing potatoes. In addition, potatoes could go straight from the earth to the kitchen without having to be refined at a mill, which made the crop very appealing to the poor. The potato is actually credited with saving Ireland from famine…but no one knew how devastating Ireland’s reliance on it would become.

For all of its attributes, the potato has one major drawback: it is susceptible to potato blight. Caused by a funguslike organism called Phytophthora infestans, which travels in airborne spores, an outbreak can destroy every potato plant for hundreds of miles. Even today, scientists have not found a cure.

In 1845 Ireland was hit hard with blight, and the country’s entire potato crop failed. As food stores dwindled, Ireland begged neighboring England, which ruled them at the time, for help. But the British did nothing. When the blight hit again the following year, the British sent soldiers and farmers to help out, but by then there was little anyone could do—tens of thousands of acres of potato fields were dead or dying. When the crops failed yet again in 1847, families that relied on their potato crops to pay rent were evicted from their land, causing a mass exodus from Ireland. Result: About a million people died, and millions more fled to Europe and the Americas (including the families of John F. Kennedy and Henry Ford).

Before the Potato Famine, Ireland was on its way to becoming a major political force in the West: High-yielding potato crops were boosting the country’s economy, and its eight million citizens were close to gaining independence from England. Within three years, however, the population was cut almost in half and the land was scarred from repeated attacks of blight. Many Irish held their English rulers responsible, claiming that they waited too long before helping. The Irish Potato Famine only intensified the bad blood between the two nations that continues to this day.

THE BIRTH OF THE MODERN POTATO

The potato blight hit North America as well, but because the United States also grew corn, oats, wheat, and barley, Americans were able to compensate for it. Besides, even with Franklin’s and Jefferson’s endorsements 50 years earlier, the potato was still primarily used as livestock feed.

The potato did have its advocates in America, though—none more important than horticulturist Luther Burbank. Burbank spent 55 years developing more than 800 new varieties of fruits, vegetables, nuts, and grains. His goal was, simply, to feed the world. Burbank’s greatest achievement came in 1871 when he developed a hybrid potato—the Burbank—that produced twice as many tubers per crop and was much larger than any potatoes that had existed before. Most importantly, this new potato showed more resistance to blight than previous varieties. Burbank sent some tubers to Ireland to help rebuild the potato crop, which, even 20 years later, was still suffering the effects of the famine.

Thanks to Burbank’s advances, the potato started to catch on in North America. Once it did, it didn’t take long for chefs to learn how versatile the vegetable is. Potatoes can be boiled, baked, or fried; they can be mashed, sliced, or powdered; they can be used to make sauces thicker and stop ice crystals from forming; and they can be used to make pasta and baked goods. After hundreds of years of distrust and suspicion, by the beginning of the 20th century, the potato had become one of America’s staple crops.

THIS SPUD’S FOR YOU

In the 1920s, Idaho was emerging as “The Potato State.” Why Idaho? Because of its altitude, the days are warm and the nights are cool, creating the perfect growing climate. There is also plenty of irrigation water to soak tubers submerged in the porous volcanic soil. And because few people lived in Idaho at the time, millions of acres of land were available for potato farms.

The most successful of the farmers was J. R. Simplot. He started working on a potato farm in Declo, Idaho, when he was just 14. With a keen mind for business and understanding of distribution, Simplot became the potato baron of Idaho and the main supplier of potatoes to the western United States, as well as to the U.S. Armed Forces in the 1930s and ’40s. (Simplot lived until 2008, dying at the age of 99. His company now has annual revenues in excess of $3 billion— they are McDonald’s #1 potato supplier.)

Through the Great Depression and into World War II, potatoes thrived as an inexpensive, easy-to-grow crop that could easily feed the masses—and the troops. This was crucial during wartime. Most crops only grow in specific climates or terrains, which means that they have to be cultivated in one place and delivered to another. Ships carrying fresh produce overseas were always in danger of being sunk by the enemy. Potatoes, on the other hand, could be grown almost anywhere. In Europe and the Americas, thousands of farmers grew nothing else during those years. By the end of World War II, the all-American meal was simply “meat and potatoes.”

The vegetable that was first revered by the Incas, then used as pig feed in the Western world, is now a $100 billion-a-year business.