Why Are Shoe Sizes as They Are?

March 30, 2016 Melissa
Kim A. asks: How did they come up with the standard sizes for shoes? 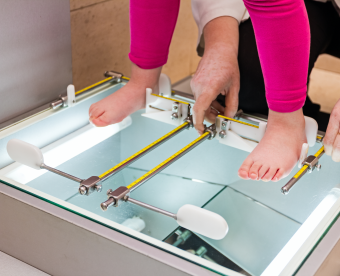 Seemingly arbitrary, there is a crazy logic (and a lot of muddy history giving rise to tradition) behind the numbers assigned to different shoe sizes.

During the reign of England’s Edward II (1284-1327), certain measurements became standardized.  Most pertinent to the discussion at hand:

Three barley-corns, round and dry, make an inch, twelve inches a foot, three feet a yard (ulna), five and a half yards a perch, and forty perches in length and four in breadth an acre.

Although strange to us today, Edward didn’t pull the idea of using a barley-corn for measuring things out of his bonnet. Rather, this had been a tried and true method of measurement and a cornerstone of global trade as far back as the second millennia BC. For example, in ancient Levant, 6 barley-corn were used to denote one Assbaa (a finger) and 32 Assbaas equaled a cubit (which was also 8 Cabdas or palms).

Edward’s only real contribution here was to set three barley-corn (specifically a kernel of barley-corn from the middle of the Ear to keep things as consistent as possible) as an official standard for the inch in response to pressure from tradesmen and the like who were fed up with the conflicting measurement standards of the day. For instance, the Welsh foot at the time was considered to be 27 barleycorn while the Saxon foot was 39 barleycorn. Setting the standard at 36 barleycorn to a foot partially solved the problem, though there was still some potential variance based on the size of the physical barley-corn.

So what does this have to do with shoe sizes?  Edward II has long been widely credited with establishing the first shoe sizing system based on 1/3 of an inch (one barleycorn) per size increment and 1/6 of an inch for a half size.  While that is indeed the sizing standard in many regions today and it is extremely likely this is due to the barleycorn unit of measure so standardized, despite legends to the contrary, there is no evidence that Edward had anything to do with explicitly setting that shoe standard as numerous otherwise reputable sources claim.

In fact, the earliest known standardization efforts by groups of shoemakers didn’t occur until long after Edward II had gone the way of the Dodo. Further, this first known system did not use the 1/3 of an inch increments for their sizes, but rather 1/4 of an inch. This was noted by British genealogist Randle Holme in his 1688 work The Academy of Armory and Blazon. In it, he mentions there was a guild of shoemakers who had agreed that:

The Size of a shooe is the measure of its length which is in Children divided into 13 parts; and in Men and Women into 15 parts; the first of these being five inches long before it be taken for a size; what the shooe exceeds that length, every fourth part of an inch is taken for a size 1, 2, 3 , and so forwards to 12 which is called the Boys or Girls thirteens, or the short thirteens, and contains in length 8 inches and a quarter from which measure of 8 inches and a quarter the size of Men and Women, called the long size or Man’s size begins at 1, 2, 3, etc. to the number 15, each size being the fourth part of an inch as aforsaid; so that a Shooe of the long fifteens is in length 12 inches just.

Before this (and for some time after), many simply made their own footwear at home, and professional shoemakers tended to keep their own varied sizing systems. Beyond this, they also often made and kept lasts (templates) for certain adult customer, so that person could re-order shoes from them without needing to be re-measured.

While many (perhaps even most) shoemakers most likely had long been using barleycorn units as a factor in their sizing systems, it wouldn’t be until 1856 when we get the first known hard documented instance of a 1/3 inch increments in a shoe sizing system, mentioned in The Illustrated Handbook of the Foot by Londoner Robert Gardiner.

Much more significantly, in 1880, New Yorker Edwin Simpson also used the old barleycorn increment to separate full shoe sizes in his proposed standard set of lasts. These incorporated the length, ball width, heel and instep into the shoe size, something of an innovation when it came to generic shoe sizing. Within a decade, this system would be adopted by the Retail Boot & Shoe Dealers’ National Association.  Later, a similar system was adopted in Britain. It was at this same time that the idea of half sizes first came into being, though these weren’t popular for a few more decades owing to the need to stock more inventory to accommodate the potentially finer fitted shoes.

Despite this standard being widely accepted from the early 20th century on, up until very recent times, different manufacturers resisted adhering too closely to this, with the variance used as a means to help brand loyalty.

This brings us to the present day. While different manufacturers still sometimes vary their sizing slightly from one another, today in America, the sizing generally adheres relatively closely to a formula of 3 times the length of the foot in inches (the barleycorn length), less a constant (22 for men and 21 for women). So, if a man wears a size 9 shoe, his foot should be about 10 1/3 inches (or 31 barleycorn) long, while a woman wearing a size 7 has a 9 1/3 inch (or 28 barleycorn) long foot.

In the UK, shoe sizes follow a similar method of computation, except that the constant is 23, and it is the same for men and women.

For European sizes, the calculation is much easier at 1.5 times the length in centimeters, plus an additional 2 centimeters “for comfort.” So, a 24-centimeter foot would wear a size 38 shoe.