The Forgotten Beatle- The Story of Jimmie Nicol 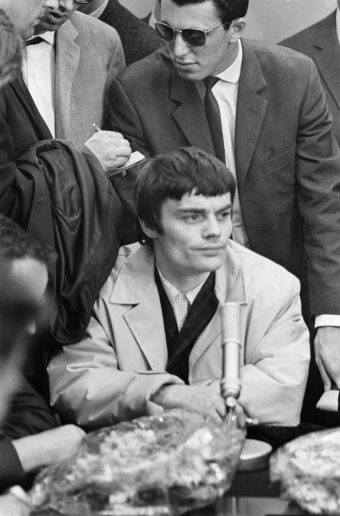 On June 3, 1964 Ringo Starr inexplicably collapsed and was rushed to the hospital where it was found he was suffering from severe tonsillitis that required immediate surgery. Unfortunately for the band, Ringo had collapsed literally the day before they were due to embark on their world tour, for which many thousands of tickets had already been sold and a considerable amount of money had been spent booking venues, hotels, etc.

Band manager Brian Epstein wasted no time in making calls to arrange a replacement drummer to stand-in for Ringo while he was recovering. This was much to the annoyance of George Harrison who reportedly told Epstein that “If Ringo isn’t going, then neither am I. You can find two replacements”. John Lennon and Paul McCartney were decidedly less upset with the idea of using a stand-in drummer and with the help of Epstein were eventually able to convince Harrison to soften his position by imploring him to think of the fans who’d be disappointed if they canceled the first part of their tour.

Jimmie Nicol’s name was first brought up by producer George Martin who had worked with him previously and was aware that he’d been the session drummer for an album full of Beatles’ covers simply titled “Beatlemania”, meaning that he was able to play at least some of the Beatles’ back catalogue competently already.  This was key given that they had just one day to find and train up a replacement for Ringo.

In what must have been the most surreal day of Nicol’s life, he received a phone call to come down and audition, then upon arrival drummed through a handful of songs, after which he was immediately offered a gig with the most popular band in the world. When he accepted, he was fitted for a suit and had his hair cut into a traditional Beatles moptop. He was now set to go on a world tour as a temporary member of the Beatles.

Exactly how much Nicol was paid for his brief stint with the band has never been confirmed. However, in a rare interview, he claimed that he was offered £2,500 (about £45,000 today) per show, plus an additional £2,500 to temporarily sign with the band’s label. Not bad for a guy who the week before was getting paid about one thousand times less than that per gig. Nicol would later recall, “That night I couldn’t sleep a wink. I was a fucking Beatle!”

And so it was that within 24 hours of meeting with Epstein, Nicol was playing a set with the band in Copenhagen on June 4th in front of thousands of screaming fans. Said Nicol, “The day before I was a Beatle, not one girl would even look me over. The day after, when I was suited up and riding in the back of a limo with John Lennon and Paul McCartney, they were dying just to get a touch of me. It was very strange and quite scary.”

He also later admitted that his time with the band was a real eye opener for him in terms of how the Beatles behaved when the cameras weren’t watching.

“…Paul is not the clean chap he wants the world to see.  His love of blonde women and his general dislike of the crowds are not told.  John, on the other hand, enjoyed the people, but used his sense of humour to ward off any that he didn’t care for.  He also drank in excess.  In Denmark, for instance, his head was a balloon. He had drunk so much the night before that he was on stage sweating like a pig.  George was not shy at all, as the press has tried to paint him. He was into sex as well as partying all night with the rest of us.  I was not even close to them when it came to mischief and carrying on. I thought I could drink and lay women with the best of them until I caught up with these guys.”

Lennon would later say of his time in Amsterdam with Nicol that “When we hit town, we hit it!  We were not pissing about.  You know, there’s photographs of me grovelling about, crawling about in Amsterdam on my knees, coming out of the whore houses and things like that, and people saying, ‘Good morning, John,’ and all of that. The police escorted me to the places because they never wanted a big scandal.”

As for how the band treated him, Nicol has always been adamant that they were nothing but nice and welcoming to him during the two weeks he spent on tour and that they asked him each day how he was handling everything, to which he would always sheepishly respond “It’s getting better”.  According to Edward Hunter Davies, the author of the only authorised biography of the Beatles, this was the original inspiration for the title of the later Beatles song, “Getting better”.

Nicol did admit though that,

I felt like an intruder, as though I had wandered into the most exclusive club in the world.  They have their own atmosphere and their own sense of humour.  It’s a little clique and outsiders just can’t break in.  I loved every minute of it, but after living through it, I don’t ever want to become a Beatle! I nearly went potty!  They spend their lives living in little boxes in airliners, hotel rooms and dressing rooms.  They live out of suitcases…

I often went out alone. Hardly anybody recognised me and I was able to wander around. In Hong Kong, I went to see the thousands of people who live on little boats in the harbour. I saw the refugees in Kowloon, and I visited a nightclub. I like to see life. A Beatle could never really do that.

As for how Ringo felt while this was happening, the band sent him numerous telegrams while touring making fun of his illness and joking that Nicol was getting comfortable in his suits, with the implication that maybe they might just replace their ailing drummer. Ringo himself had replaced Pete Best after occasionally subbing for Best when he was ill. Ringo would later say, with his tongue firmly in his cheek, “They’d taken Jimmie Nicol and I thought they didn’t love me any more”.

While he only played eight shows with the band, critics were impressed with Nicol’s skill. Jim Berkenstadt, author of The Beatle Who Vanished, stated of Nicol’s performances,

In the shows in the Netherlands and Denmark, he was a bit nervous and just tried to stick to four-in-the-bar. John Lennon would turn around oftentimes and show him his strumming on the two- and four-beats so that Jimmie could stay in sync because the screaming of the fans was so loud. That was something he had always done with Ringo as well. As they got to Hong Kong and then played Adelaide, Australia, Jimmie really had it figured out. He started to add his own flourishes. When the song ended and John, Paul and George were bowing, Jimmie continued to play out a drum riff to milk the crowd for more applause. That never would have happened with Ringo. Ringo finished exactly when everyone else did and would bow at the same time. But now Jimmie was starting to feel his oats and use his own style.

After a little under two weeks in the hospital, Ringo met up with the band again in Melbourne on June 14th after a brief stopover in Sydney. According to Ringo, he arrived a few hours before the rest of the guys and was nearly trampled to death by a crowd of fans.

When the rest of the band arrived, the five of them had a drink together and went to bed. The next morning, Nicol had one final interview as an official member of the band before being driven to the airport to wait for a flight home, alone. Before he left, Epstein took Nicol aside and presented the young drummer with a gold watch, engraved with the message “From the Beatles and Brian Epstein to Jimmie – with appreciation and gratitude”. Epstein also gave him a bonus of £500. And that was it.

Nicol’s life immediately following his approximately two week career as a member of one of the most influential music groups in human history wasn’t great. What he did first was reform an old band of his called The Shubdubs under the new name- Jimmie Nicol & The Shubdubs. They released two singles to middling commercial success before breaking up again.

As for the over twenty thousand pounds he’d made during the tour, it was reportedly spent within just nine months, with much of the money being invested in his failed band. The media didn’t help, with one British newspaper in 1965 gleefully declaring that Nicol had declared bankruptcy and was over £4,000 in debt. At the same time, his wife left him and took his young son, Howard. Less than a year after touring with the Beatles, Nicol found himself living in his mother’s basement.

When Paul McCartney heard all of this on the news, however, he made a couple phone calls and secretly arranged for some session work for Nicol. Paul later lamented, “It wasn’t an easy thing for Jimmie to stand in for Ringo, and have all that fame thrust upon him. And the minute his tenure was over, he wasn’t famous any more”.

But things were looking up a bit at this point. After doing various sessions and performances for various groups, the successful Swedish instrumental band, The Spotnicks, offered Nicol a gig and eventually made him a full member of the band. However, drugs later got the better of him and he ultimately walked out on the group while touring in Mexico.

By 1975, Nicol had all but given up music, working renovating houses instead. He also shied away from speaking to the press, with one of the last interviews he ever gave about his time with the Beatles being a private one granted to a fan at a Beatles convention in 1984. As for his reasons for avoiding the press, he stated in 1987, “After the money ran low, I thought of cashing-in in some way or other. But the timing wasn’t right. And I didn’t want to step on The Beatles’ toes. They had been damn good for me and to me.”

After that, Nicol mostly disappeared, even wrongly being declared dead in the news in 1988. Today even his own son, Howard, a BAFTA award winning sound engineer, claimed in 2015 he wasn’t sure whether or not Nicol was alive or dead.  (That said, for whatever it’s worth, in 2014 the Daily Mail claimed that Nicol was alive and well living somewhere in London. Whether this is true or not, however, isn’t known as even the author of The Beatle Who Vanished after almost a decade of trying could not track down Jimmie.)

In the end, while Nicol always had nice things to say about the Beatles themselves, and occasionally was even quite positive about elements of his time with the group, he once summed up his thoughts on getting this historic gig:

Standing in for Ringo was the worst thing that ever happened to me. Until then I was quite happy earning £30 or £40 a week. After the headlines died, I began dying too.

(If that isn’t uplifting enough for you, you should read our article covering what happens to a significant percentage of big ticket lotto winners…)