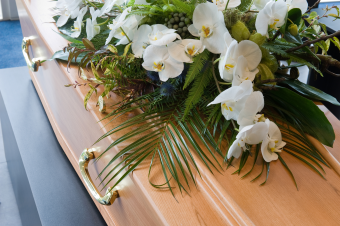 When you die, your body is, in a quite real sense, never more alive. Beyond the amazing number of microbes that already call your body home (more of their cells than your own at any given time), other bacteria and varying fungi and fauna colonize the body with great rapidity after death. As the body becomes biome, flesh undergoes a dreadful pantomime of balloon animal elasticity – swelling, bloating, and distorting. This danse macabre is quite likely not what one has in mind when one hears of life after death. However, these commonplace morbidities of life in death pale in comparison to one of the more unusual, and completely tragic, graveyard phenomena – postmortem fetal extrusion (a.k.a coffin birth – where the dead mother gives birth after the fact to an equally dead baby).

Historical texts bear this gruesome curiosity out with clinical chill. In 1551, one of the earliest known documented cases of coffin birth was recorded: a victim of the Spanish Inquisition, swinging at the gallows, gave birth hours after her execution. In 1633, in Brussels, a woman who died in labor convulsions gave postmortem birth three days later. In 1650, a parish register noted, “April ye 20, 1650, was buried Emme, the wife of Thomas Toplace, who was found delivered of a child after she had lain two hours in the grave.” In 1677, another woman died in labor; six hours later abdominal movements were observed and still eighteen hours after that her deceased child was born. In 1861, sixty hours after a woman died in convulsions, she “gave birth” to her eight month old baby.

The idea of postmortem birth has been recognized as both a mythological notion and a medical possibility for centuries. Indeed, the Greek God of medicine, Asklepios, was cut from his mother’s womb after she was killed upon Mount Olympus. The earthly heirs of Asklepios, medical professionals of yore, made common practice of opening the bodies of dead pregnant women, aware that live birth was still possible if they were fast enough. Indeed, the Catholic Church, intent upon delivering children from the purgatory of death before baptism, supported this as church doctrine – priests were called upon to perform the postmortem cesarean on pain of excommunication.  At times, some physicians didn’t even bother to wait for the mother to die if it seemed absolutely certain that she would do so anyway, further helping to ensure the survival of the child. (For more on all this, see: The Truth About Julius Caesar and Cesarean Sections and The First British Surgeon to Perform a Successful C-Section Was a Woman Disguised as a Man)

But this is an article about when the baby is not cut out. So what happens then? Dead bodies decompose. This process involves the diminution of oxygen which in turn is accompanied by the multiplication of anerobic bacteria which leads to a buildup of gases like carbon dioxide and methane created on breakdown of the body. The gases cause the body to swell up significantly. It is those gases which perform a similar role to the contractions a woman experiences during normal childbirth. The increased volume of gases in the deceased pushes on the uterus, forcing the dead fetus through the vagina (and occasionally also forcing the uterus itself to prolapse out). Thus, through the decomposition of the dead, a gruesome birth is simulated- hence the term “coffin birth.”

Given that all it potentially takes for a coffin birth to happen is the death of a pregnant woman where saving the baby isn’t attempted, why don’t we hear about these coffin births today? Beyond cremations, this is primarily due to the ubiquity of embalming the dead. Chemicals used to preserve the body and make it presentable slow down decomposition and flush the normal bodily fluids and a significant number of microbes away. The result is removal of many of the elements that are so instrumental to coffin births, making them an extremely rare occurrence in modern times.

Rare, however, is not never and documented coffin births do occasionally still happen. For instance, in 2005 in Hamburg Germany, a pregnant woman was found dead and in a relatively advanced state of decay in her apartment, dying of a heroin overdose. During the subsequent autopsy, the head and shoulders of the fetus were noted to be protruding from the woman’s vagina and it was determined to be a case of postmortem fetal extrusion, a.k.a. coffin birth. Similarly in 2008 in Panama, a pregnant woman who had disappeared was found decomposing in a field days later, victim of a homicide. Her decaying fetus was discovered in her underwear. Just a few years ago in 2013, a pregnant Eritrean migrant drowned when the ship she was taking to Italy capsized. When a diver recovered the corpse, the baby was discovered in the mother’s leggings.

Not all postmortem deliveries result in the death of the baby, however, though these are then technically not classified as postmortem fetal extrusion. Such was the case of a 23-year-old woman in India in 2007. After contractions started, she killed herself but her body ultimately completed the birth of the infant naturally- a rare example of postmortem delivery. The baby was later found alive and still attached to the dead mother’s body, an instance where life and death had a truly tragic umbilical connection.

If you liked this article, you might also enjoy