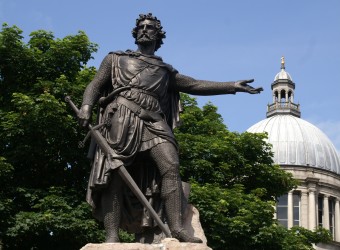 William Wallace was one of those to lead Scotland’s battle for freedom from England after King Edward I of England declared himself Lord Paramount of Scotland in the late 13th century. Wallace was finally caught on August 5, 1305, and brought to London for trial and execution. From the 15th century minstrel “Blind Harry” to modern times with the blockbuster film “Braveheart” (both accounts being wildly inaccurate), William Wallace’s acts to try to free Scotland have captivated people for centuries.

Born in Scotland around 1270, Wallace was from a family of minor Scottish nobility. During his formative and early adult years, Scotland was ruled by King Alexander III and the country enjoyed an era of peace and stability. However, the King died suddenly in 1286, leaving a four-year-old granddaughter, Margaret, Maid of Norway, as heir to the throne. (She would ultimately be engaged to King Edward I of England’s son.)  However, on her way to Scotland in 1290, Margaret got sick and died.

With no clear heir at this point, chaos reigned.  The feuding Scottish nobles, hoping to avoid open civil war, eventually decided to invite King Edward I of England to arbitrate between the rival factions for the crown. Unfortunately for them, King Edward saw an opportunity in the fractured nation- he demanded that if he were to arbitrate the matter of who should be the next king of Scotland, that the Scottish nobles should recognize him as the overlord of Scotland. This didn’t set well with the nobles, but a compromise was reached such that until a king was crowned, Edward could serve in this fashion.

This culminated in a feudal court at Berwick-upon-Tweed in 1292 deciding John of Balliol should be king, having the best claim to the throne. Despite this, King Edward didn’t give up his powers as overlord of Scotland and even demanded the Scottish provide him with soldiers to fight France with. This was the last straw. The Scottish under King John decided to side with France instead.

After a bit of fighting, Edward managed to crush the, in his view, rebellious Scottish, forced John to abdicate his throne, then setup English rule across Scotland.

What we do know definitively is that around the age of 27, William helped assassinate the English High Sheriff of Lanark in May of 1297.  According to Blind Harry’s account (written almost two centuries after the event and mostly based on oral history, though Harry claimed his primary source was a supposed book written by Wallace’s chaplain, Father John Blair), Wallace had done this in revenge for the Sheriff murdering Wallace’s wife, Marion Braidfute of Lamington.  Of course, many points of Blind Harry’s account of Wallace’s life don’t line up with documented history and there is no direct evidence that the Sheriff did any such thing, or even that Marion Braidfute of Lamington existed at all.

Whatever his motivation, Wallace and his followers joined forces with Andrew Moray and made plans to confront the English at Stirling. The Scots were vastly outnumbered but won the tactical advantage when the enemy was forced to cross a narrow bridge before they could attack. In stark contrast to somewhat more common chivalric fighting of the day, where it would have been proper to let the English cross the bridge fully before engaging them, Wallace, Moray, and their forces decided to do the more prudent thing and simply let some of the forces cross, as many as they could easily handle, then butchered their enemies until the bridge collapsed. The vastly outnumbered Scots had themselves an unlikely – and resounding – victory.

After the Battle of Stirling Bridge, William Wallace was knighted and soon proclaimed the “Guardian of Scotland and Leader of its armies.”

This honor was short lived, however, as on July 22, 1298, Wallace’s troops were defeated at Falkirk. He immediately gave up his guardianship, handing the job over to heir apparent Robert, Earl of Carrick (later known as Robert de Brus).

After this, there is some evidence that Wallace traveled to France in 1299 to drum up French support for Scotland’s bid for independence. At the same time, certain of the ever-changeable Scottish nobility were negotiating peace with King Edward.

Wallace then played a bit of cat and mouse with the English until Scottish knight and nobleman, John de Menteith, who had been named Governor of Dumbarton Castle by King Edward, managed to capture and turn Wallace over to the English at Robroyston just outside Glasgow on August 5, 1305. How he did this isn’t clear, though the general view is that Wallace’s servant, Jack Short, was the one that relayed Wallace’s location to de Menteith.

Whatever the case, Wallace was put on trial in Westminster Hall for treason on August 23, 1305. He maintained, however, that “I could not be a traitor to Edward, for I was never his subject.” This meant diddly to those passing sentence. They ultimately doomed Wallace to suffer the typical fate of a traitor (at least a male convicted of high treason) in England at the time- being hanged, drawn, and quartered.

In more graphic terms, he was dragged through the streets naked, then hanged to near the point of death, but dropped just before so he could experience the next part of his punishment- being castrated and disemboweled. Finally, a beneficiary of this punishment was chopped up with his head, arms, and legs removed from his body.

It’s thought that Wallace’s execution at Smithfield was the star attraction at the Bartholomew Fair, the biggest market of the year in medieval England. Just good family fun… (If you’re curious, women convicted of high treason in England at the time were burned alive instead, with the differing punishment reportedly being for reasons of public decency.)

As with others who were convicted of high treason, Wallace’ severed bits were displayed around at choice locations as a warning to other would-be traitors. In Wallace’s case, his head was dipped in tar and stuck on a pike on London Bridge. His limbs were displayed in Newcastle upon Tyne, Berwick-upon-Tweed, Stirling, and Aberdeen.