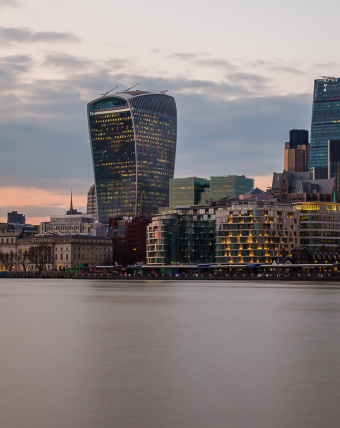 The 525-foot skyscraper at 20 Fenchurch Street in London, England earned the nickname “Walkie Talkie” thanks to its unique design. Slim at the bottom and wider at the top, locals could not help noticing its similarities to a handheld, two-way radio. However the Walkie Talkie also has another nickname- Walkie Scorchie.

Construction began on the skyscraper in 2011 amidst controversy surrounding its appearance; it was complete enough for its first tenant to take up residence in May of 2014. Construction finished in August of that same year. However, long before completion, in September of 2013, the director of Moderna Contracts, Martin Lindsay, parked his car across the street from the south side of the Walkie Talkie building. His Jaguar XJ was in a parking space there for an hour or two before he returned to find the plastic mirror, Jaguar emblem, and other parts of his car had been melted by sunlight reflected from the Walkie Talkie.

Lindasy told the BBC about his experience returning to his car that day: “I was walking down the road and saw a photographer taking photos and asked, ‘what’s happening?’ The photographer asked me ‘have you seen that car? The owner won’t be happy.’ I said ‘I am the owner. Crikey, that’s awful.’”

Fortunately for Lindsay, the construction company owned up to the damage and left a note on his windshield asking for him to give them a call.  They paid for the repairs, costing £946, or about $1,400. But Lindsay’s luxury Jaguar was not the only casualty of the Walkie Talkie’s so-called ‘death ray.’ A van owned by heating and air conditioning engineer Eddie Cannon received similar treatment. He stated of the inside of his van“… every bit of plastic on the left hand side and everything on the dashboard has melted, including a bottle… that looks like it has been baked.”

Certain businesses on the southern side of the skyscraper also sustained heat damage, including cracked tiles and singed carpets. One business owner even fried an egg and toasted a baguette in the light from the building.

So what’s going on here? The south side of the Walkie Talkie curves into a concave shape, resulting in light reflected from a large area being concentrated into a small one.

Architect Rafael Viñoly designed the building, knowing that the concave on the south side would have this problem. (In fact, another building he designed in Las Vegas has a very similar problem scorching hotel guests, more on this in the Bonus Facts below.) But he and his team did not expect the building to produce nearly as much heat as it does at certain times on sunny days. Viñoly told the Guardian: “When it [the problem] was spotted on a second design iteration, we judged the temperature was going to be about 36 degrees [Celsius]… But it’s turned out to be more like 72 degrees [Celsius].” (That would be about 161 degrees Fahrenheit.)

After paying to fix the damages done by their building, the owners of the Walkie Talkie installed a temporary sunshade in early 2014. This device consisted of a dark screen that prevented the reflected sunlight from causing damage. The permanent fix consisted of installing horizontal aluminum fins throughout the offending south side, which diminished the view a bit from inside the building, but also killed the “death ray”.