The Truth About Your Flammable Farts 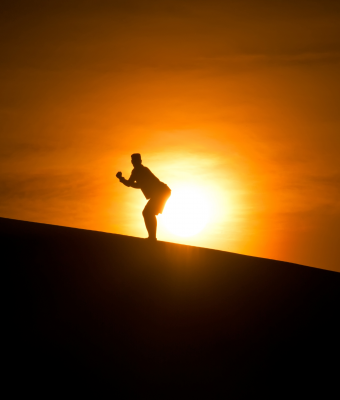 Contrary to popular belief, it’s probably not methane leaking from behind that reckless “bros” light on fire (known as pyroflatulence); rather, it’s most likely primarily hydrogen.

In a typical, healthy body, human farts are comprised primarily of hydrogen, nitrogen, some carbon dioxide and potentially a small amount of methane and oxygen.

These farts are primarily made in two ways – from swallowing air and digesting food. Swallowed air delivers nitrogen and oxygen to the digestive tract, where the latter is mostly, if not fully, absorbed. The nitrogen, on the other hand, passes through unimpeded, hence making up a large component of a typical gaseous rear expulsion. Nitrogen, however, is not flammable, which is good as it makes up about 78% of the Earth’s atmosphere.

The remaining gases in farts, which also may include a small, yet extremely potent, amount of hydrogen sulfide (think rotten egg smell), are generally byproducts of the fermentation and other action that occurs when microbes in the gut feast on fiber and the like in the diet of the host. These microbes include certain bacteria as well as a primitive form of life, previously thought to be bacteria, called archaea.

The hydrogen, hydrogen sulfide and methane produced by these microbes can all be lit aflame, and such a typical fart will usually burn yellow or orange, with the flammable part mostly being hydrogen in this case. If, however, the lit fart has a blue flame, this is generally attributed to the expulsion having an unusually high methane content.

Methane in any measurable amount in most people’s flatus is not terribly common with only about 1/3 of humans having measurably significant amounts in their farts. Even then, in one small study (looking at only ten people’s farts and experimenting around a bit with their diets during the study), it was found that those that did have measurable amounts of methane only produced it when fed significant amounts of fiber. (The fiber free version of their farts was almost wholly made up of nitrogen for all ten subjects.) With the fiber version, the average fart only contained about 3.6% methane. The bulk of these individuals’ flatus was made up of hydrogen (51%) and nitrogen (30%).

Why only some people produce methane in their flatus isn’t entirely clear, though at least in part has to do with what microbes call one’s intestines home. So far, only three microbes have been identified as methane producers (methanogens) in humans: Methaniobrevibacter smithii, Methanospaera stadmagnae and Methannobrevibacter oralis.

Scientists have identified a few factors in predicting if a person is a methane producer, and one of the most important of these appears to be where you live (although it’s not clear if genetics plays a role as well in some way). For example, while 77% of Nigerians and 87% of South Africans produce methane, only 34% of Norwegians and 35% of those who live in and around Minneapolis do so. In addition, adult women are more likely to produce measurable amounts of methane in their farts, and young children are less so. Finally, if both your parents produce methane, then there is a greater likelihood that you will, too, with one study indicating as high as a 95% chance that the spawn of two methane producers will also produce methane.

In any event, care should be taken when practicing pyroflatulence. For instance, in 2008, a 12-year-old boy received “18% burns to the backs of his legs and thumb,” while lighting his flatus; although, in his case, he failed to notice a can of petrol nearby.  Beyond such external factors inflaming the situation, a survey done by the now defunct Fartcloud website (an online survey, so it may well just be all hot air) indicated that 1 in 4 people who’ve lit their own farts burned themselves in the process.