This Day in History: July 8th- The Liberty Bell and a Famous Reading 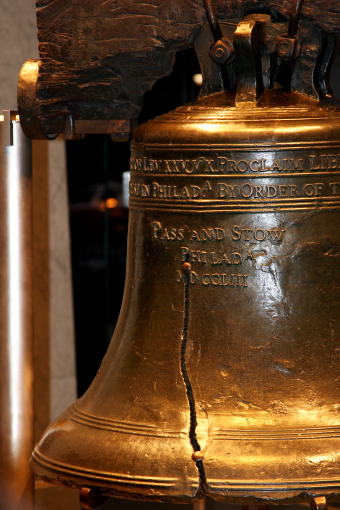 Like many beloved tales of early Americana, such as Betsy Ross creating the flag, the Declaration of Independence being signed on July 4th (it was actually about a month later), and Paul Revere doing that midnight ride as a solo act, the tale of the Liberty Bell ringing to mark the first reading of the Declaration of Independence may be more fantasy than fact. We know the bells in the city of Philadelphia were rung on July 8, 1776 to celebrate the occasion, but it’s unlikely that the Liberty Bell was among those pealing that day.

The Liberty Bell came to be in 1751 when the Pennsylvania Provincial Assembly had it made to commemorate the fiftieth anniversary of the state’s constitution. The bell was cracked during a test and recast twice before being hung from the Pennsylvania State House steeple in 1753.

The bell was rung to call to the assembly to order, and to summon people for special events and important announcements, such as the ascension of King George III. But after 1773, ringing the bell was avoided. The steeple it was enclosed in was in such disrepair it was feared it would topple over.

A back-up bell to toll the hours was installed in a small belfry on the roof of the statehouse. It was this bell that most likely rang with all the others in Philadelphia after the reading of the Declaration of Independence on July 8. The Liberty Bell sat in the rotting steeple until 1781, when it was lowered into the brick portion of the tower, unseen for 71 years. It was finally put on display for public viewing in 1852.

It was in the 1850s that the legend of the Liberty Bell being rung as the Declaration of Independence was being read began thanks to several writers. Two of the most noteworthy tales involve stories being told from the point of view of Revolutionary War veterans, and an elderly bell-ringer and a young lad. As often happens, fact and fiction begin to merge with the passing years.

It doesn’t seem to matter. The Liberty Bell is a huge draw at Independence National Historical Park. In her book about the park, Professor Constance M. Greiff said, “The Liberty Bell is the most venerated object in the park, a national icon. It is not as beautiful as some other things that were in Independence Hall in those momentous days two hundred years ago, and it is irreparably damaged. Perhaps that is part of its almost mystical appeal. Like our democracy it is fragile and imperfect, but it has weathered threats, and it has endured.”