The Vandals and Vandalism 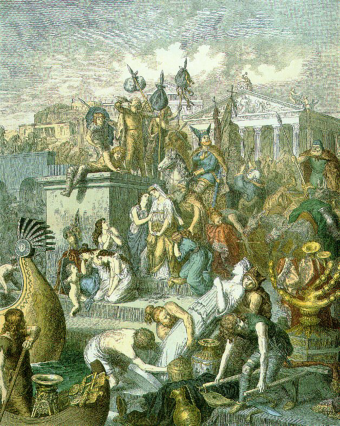 The English word vandalism derives from the French word, vandalisme, and was first seen in print in 1794 when the Bishop of Blois, Henri Grégoire, included the term in a report of the mayhem, and in particular the destruction of art, that occurred during the French Revolution.

Vandalism itself was a modification of vandal, a word that in English dates back to about the mid-1600s when it was used to describe a person who destroys things that are beautiful and worthy of respect.

Vandal with a capital V has also been used in English since the mid-1500s as the name for the tribe of Germans who sacked ancient Rome, and is derived from the Latin Vandalus, which came from the Proto-Germanic *wandljaz (meaning “wanderer’).

Vandals were found throughout southern Scandinavia prior to the Fall of Rome. They eventually migrated south and by the second century A.D., had acquired land in today’s Romania (then called Dacia).

The Vandals had their own problems, though, and around about 375 A.D., the Huns invaded from the East. With their origins in the steppes of Central Asia between the Atlai Mountains (today at the intersection of China, Kazakhstan, Mongolia and Russia) and the Caspian Sea (to the east of the Caucasus), the Huns brutalized eastern Europe and are seen by many as the catalyst of the Great Migration (376-476 A.D.), when a number of Germanic tribes, including the Vandals, pressed deeper into the Roman empire to escape.

With the migration came temporary alliances between the Romans and the Germanic tribes, which eventually fell apart. As such, by 406 A.D., the Vandals had crossed the Rhine and invaded Gaul and eventually the Iberian Peninsula. Over the next decade or so, Vandals fought other Germanic tribes, and each other, and then ultimately united to fight against Roman forces in southern Spain.

Shortly thereafter, in 429 A.D., the Vandals seized control of Roman holdings in North Africa (according to some historians, with the support of the leadership in Rome who was at odds with North Africa’s governor). Although a peace treaty was signed with Rome in 435 A.D., by 439, the Vandals had expanded into Carthage and eventually took Sicily, Corsica and Malta, among other European holdings.

In 455 A.D., Rome broke an agreement with the Vandal King Genseric, so he marched on Rome. According to chronicler Prosper of Aquitaine, the weakened city didn’t even try to fight.  Instead, an agreement was supposedly reached such that the Vandals were allowed to enter the city and plunder it, unopposed, as long as they agreed not to kill anyone or burn anything down. In compliance, the Vandals spent the next two weeks taking everything that wasn’t nailed down (and more than a few things that were, such as stripping away the bronze roof tiles in the Temple of Jupiter Optimus Maximus), and, presumably, destroyed a fair bit of the beautiful and venerable items in the process – hence the term.

It should be noted, however, that there is some dispute today over whether this plundering of the city was really as peaceful as Prosper purports.  While such a deal may well have been made, the Byzantine historian Procopius noted a church that was burned down while the Vandals were vandalizing, and Victor of Vita noted a large number of ships carrying captives from Rome after the sacking of the city who were then sold as slaves in Africa.