This Day in History: June 17th- Vlad the Impaler and Mehmed II 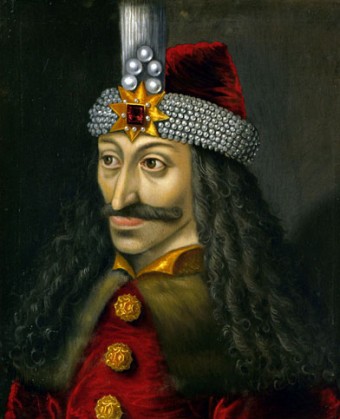 You may know him as a terrifying blood sucking vampire, but the real “Dracula” was a prince named Vlad Dracula, Son of the Dragon, also known as Vlad Tepes, (Vlad the Impaler). Bram Stoker’s literary creation will give you a shudder, but the exploits of Vlad the Impaler, Prince of Wallachia, are enough to make you sleep with the lights on indefinitely, though he was considered something of a hero throughout Christendom in his day for his war against the Muslim world.

Vlad had pretty good reason to hate the Turks, at least by his own estimation. When his father, Vlad II Dracul was still in power, he handed over his two younger sons to the Ottoman Turks as a sign of good faith. Vlad Dracula lived as their pseudo-prisoner for five years and fostered a deep hatred for both the Turks and Islam, On the flipside, his brother thrived in the environment, becoming friends with Sultan Murad’s son, and even converting to Islam.

When Vlad came to the throne, his tiny principality was a mess. The crime rate was high, the food supply was low, and trade was virtually non-existent. He knew a country in such a sorry state didn’t have a chance of fending off the Ottoman Turks, so he enacted many new, strict laws and enforced incredibly harsh penalties on those who stepped out of line.

Vlad got his “impaler” moniker in “honor” of one of these punishments. While he certainly wasn’t the first to use this particularly nasty form of torture and death, the sheer number of people he put through this heinous ordeal was extremely noteworthy.

When Vlad’s victims were impaled, the sharpened wooden stakes were rammed through their bodies in various ways.  One skilled in this “art” could even do it in such a way that the pole would slide nicely through much of the body, often from bottom up, without penetrating any vital organs. In this way, the condemned could sometimes live for several days suspended in mid-air and left to their agonizing demise. Their remains were often left as a cautionary reminder to Vlad’s subjects. Reportedly, sometimes their agonizing deaths served as a floorshow for Vlad while he and guests were enjoying dinner.

It wasn’t just his subjects who felt his wrath. When Sultan Mehmed II sent emissaries inquiring why Vlad hadn’t coughed up his non-Muslim tribute yet, the seething Dracula explained he was all tapped out thanks to a recent war with Hungary. He then questioned why the ambassadors hadn’t removed their turbans as a sign of respect when they approached him. They replied it wasn’t customary for them to do so.

That didn’t sit too well with Dracula. He ordered his guards to seize the emissaries and nail their turbans to their heads. The Turks died a horribly painful death. Vlad sent them back to Mehmed II with a little note asking that he never send such uncouth ambassadors to his court again.

Things were about to get real.

In 1462, Vlad and his troops crossed the Danube wreaking havoc wherever they went.  He wrote a letter about this on February 2, 1462 to the King of Hungary, Matthias Corvinus, stating,

I have killed peasants men and women, old and young, who lived at Oblucitza and Novoselo, where the Danube flows into the sea… We killed 23,884 Turks without counting those whom we burned in homes or the Turks whose heads were cut by our soldiers… Thus, your highness, you must know that I have broken the peace.

In response, Sultan Mehmed II’s troops, led by Hamza Pasha crossed the Danube River, moving closer to Wallachia. Vlad sent decoys suffering with everything from the bubonic plague, leprosy and tuberculosis into the enemy’s encampments as a form of biological warfare and employed a scorched earth campaign. He had far fewer troops than the Turks (who came with an army of about 90,000) and depended on guerrilla warfare tactics.

By June 16, 1462, the Turks were just outside the Wallachian capital of Targoviste. Vlad decided a surprise attack with the purpose of assassinating Mehmed II, was his best bet.

Just after the stroke of midnight on June 17, 1462, Vlad Dracula and his troops attacked. The Turks desperately rose in defense against the Wallachian onslaught for the next several hours, but the carnage was brutal, with an estimated 15,000 Ottomans killed that single night. While this was good for Vlad, it only put a small dent in the enemy army and wasn’t his main objective. As mentioned, what he was really trying to do was to kill Sultan Mehmed II.

In spite of all the careful planning, confusion set in during the heat of battle. The Sultan’s two commanders, Ishak Pasha and Mahmud Pasha, were killed, but Mehmed escaped unscathed.

As dawn approached and the Ottomans began organizing an efficient counterattack, Dracula ordered a retreat without achieving his prime objective. This spelled the end of the famous Night Attack, which would be heralded as a great day for Christendom and see Vlad named a hero.

The Turkish Army approached Targoviste four days after the Night Attack. The gates to the city were wide open, and they were greeted by an ominous silence. However, the sight before them was unimaginably grotesque. An endless field of decomposing corpses made up of thousands of Turks and Bulgarian Muslims impaled in every configuration possible.

It had the desired effect. According the 15th century historian Laonicus Chalcondyles:

The Sultan’s army came across a field with stakes, about three kilometers long and one kilometer wide. And there were large stakes on which they could see the impaled bodies of men, women, and children, about twenty thousand of them, as they said; quite a spectacle for the Turks and the Sultan himself! The Sultan, in wonder, kept saying that he could not conquer the country of a man who could do such terrible and unnatural things.

Vlad continued the war, but ultimately was betrayed for reasons unknown today by one of his former allies, the aforementioned King Matthias Corvinus.  After Corvinus captured Vlad, he was imprisoned, but around 1475 was released and began to once again wage war against the Turks.

Some two years later, he was dead. It isn’t clear how or exactly when he died, but it is generally thought he was killed in battle, with his head being taken as a trophy by the Turks.