This Day in History: June 10th- A Kite in a Storm 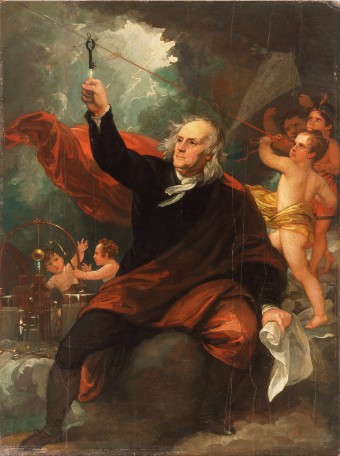 On a stormy June night in Philadelphia, American Renaissance man Benjamin Franklin purportedly decided to test his hypothesis that lightning is a form of electricity. Using a key attached to a silk kite, he found:

“When rain has wet the kite twine so that it can conduct the electric fire freely, you will find it streams out plentifully from the key at the approach of your knuckle, and with this key a phial, or Leiden jar, may be charged: and from electric fire thus obtained spirits may be kindled, and all other electric experiments [may be] performed which are usually done by the help of a rubber glass globe or tube; and therefore the sameness of the electrical matter with that of lightening completely demonstrated.”

Another feather in the cap of an already accomplished man. Franklin already enjoyed great success as a printer and author, was instrumental in founding a subscription library, and spearheaded the American Philosophical Society. He was in his 40s, and in many ways just getting warmed up.

Franklin’s newspaper, The Philadelphia Gazette, didn’t require his constant attention by the 1750s. This afforded him the leisure time to pursue his interest in science and scientific experiments. By 1750, Franklin had devised the lightning rod. He knew that if lightning storms were an electrical phenomenon as he surmised – and tall metal rods can attract that electricity away from other structures – he was on to something really useful.

The iconic kite experiment is one of the most famous moments of American and scientific history and is indicative of Ben Franklin’s ingenious and impetuous spirit. Franklin’s research into the study and applications of electricity was groundbreaking and won him the Copley Medal from the Royal Society in 1753. He introduced many terms now in common usage today, such as electrician, battery and conductor.

However, questions arose in the 20th century as to whether Franklin really performed his fabled kite experiment, or if the event was a beloved American myth along the lines of George Washington and the cherry tree or that the signers of the Declaration of Independence did so on July 4th. Those who doubt the authenticity of the tale often state that Franklin never wrote his own account of said experiment. There’s one problem with this theory. Ben Franklin did state that his proposed experiment had succeeded, first accounted in a letter written on October 19, 1752 to one Peter Collinson in London, later published in December of 1752 and read at the Royal Society of London. In the letter where Franklin describes the method to be used for the experiment, he states,

As frequent mention is made in public papers from Europe of the success of the Philadelphia experiment for drawing the electric fire from clouds by means of pointed rods of iron erected on high buildings… it may be agreeable to the curious to be informed that the same experiment has succeeded in Philadelphia, though made in a different and more easy manner, which is as follows…

Further, 15 years later, Joseph Priestley who corresponded with the then 62 year old Ben Franklin over this and other things, wrote a detailed account of Franklin’s experiment in his 1767 History and Present Status of Electricity, writing:

The Doctor, having published his method of verifying his hypothesis concerning the sameness of electricity with the matter of lightning, was waiting for the erection of a spire [on Christ Church] in Philadelphia to carry his views into execution; not imagining that a pointed rod of a moderate height could answer the purpose; when it occurred to him that by means of a common kite he could have better access to the regions of thunder than by any spire whatever. Preparing, therefore, a large silk handkerchief and two cross-sticks of a proper length on which to extend it, he took the opportunity of the first approaching thunderstorm to take a walk in the fields, in which there was a shed convenient for his purpose. But, dreading the ridicule which too commonly attends unsuccessful attempts in science, he communicated his intended experiment to nobody but his [21 year old] son who assisted him in raising the kite.

The kite being raised, a considerable time elapsed before there was any appearance of its being electrified. One very promising cloud had passed over it without any effect; when, at length, just as he was beginning to despair of his contrivance, he observed some loose threads of the hempen string to stand erect, and to avoid one another, just as if they had been suspended on a common conductor. Struck with this promising appearance, he immediately presented his knuckle to the key, and (let the reader judge of the exquisite pleasure he must have felt at that moment) the discovery was complete. He perceived a very evident electric spark. Others succeeded, even before the string was wet, so as to put the matter past all dispute, and when the rain had wet the string he collected electric fire very copiously. This happened in June 1752, a month after the electricians in France had verified the same theory, but before he heard of anything they had done.

(Note there: contrary to what is often said, the kite was not struck by lightning, which is a good thing for Mr. Franklin.)

Perhaps most prominently among those who doubt Franklin on this matter include author Tom Tucker, who accused Franklin of making the whole thing up in Tucker’s book “Bolt of Fate: Benjamin Franklin And His Fabulous Kite.” He purports Franklin didn’t conduct the famed experiment at all and just said he did to goad French and British scientists.

Many historians disagree with this theory, as it completely goes against Franklin’s character and modus operandi, as well as would have risked his considerable reputation as a scientist had such a ruse been discovered. It’s one thing to make jokes in his works, as Franklin was exceptionally prone to do, but falsifying scientific data simply wasn’t something Franklin ever is known to have done.

As Franklin biographer Walter Isaacson said, “It is unreasonable, I think, to believe that Franklin fabricated the June date or other facts of his kite experiment. There is no case of his ever embellishing his scientific achievements.”

Or as Dr. Michael Brian Schiffer of the University of Arizona said, “It is doubtful that Franklin would have crafted a piece of fictional science, for he appreciated the penalty that the gentlemanly establishment of natural philosophy would have meted out had the fraud been exposed.”

With so many verifiable achievements to his name, risking his reputation on an embellishment would hardly have been worth it just to goad a few scientists across the pond.