This Day in History: June 11th- Catherine and Henry 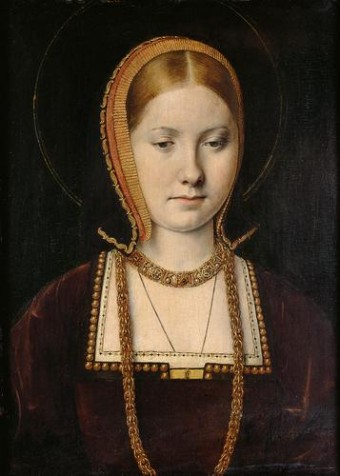 On June 11, 1509 the new king, Henry VIII, took as his bride Catherine of Aragon, who had briefly been married to his older brother Arthur, Prince of Wales, several years earlier. Henry waited long to marry his princess, and could have no idea how long he would wait – and how hard he would fight – to end his marriage two decades later.

Catherine was the daughter of the mighty Spanish monarchs Ferdinand II of Aragon and Isabella I of Castile. Securing their daughter as Prince Arthur’s bride was quite a coup for King Henry VII, who had very recently won his crown by conquest. His heir marrying the Spanish princess was a validation of his power.

Fifteen-year-old Catherine and fourteen-year-old Arthur married in November 1501, but the frail, sickly Arthur was dead by April. Henry VII did not want to return her ample dowry and offered to marry the girl himself. Queen Isabella said “no thanks” to this idea, so the king began wheeling and dealing to marry Catherine off to his other son and new heir to the throne, Prince Henry.

Queen Isabella was cool with that, and a marriage treaty was signed on June 23, 1503. The wedding was set to take place on June 28, 1506 – the groom’s 15th birthday (Catherine was seven years his senior). Then, in November 1504, Isabella died, and everything all went downhill for poor Catherine.

Not only did the unfortunate girl lose her mother, she also had to deal with the conniving Henry VII seeing her as a much less valuable prize with her mother dead. Ferdinand was not the heir to Castile so that bargaining chip had lost much of its luster. Catherine was left in the lurch as her own father did not want her to return home, and her father-in-law cut off her allowance, leaving her to live in relative poverty.

Henry VII encouraged his son to forsake Catherine and tried to set him up with other more suitable princesses, but Catherine appealed to Henry’s chivalrous nature. He’d also been fond of her since childhood, and was aghast at the way she was being treated. He vowed to right the wrongs done to her, and when his father died and he became King Henry VIII, he made good on his promise.

A Venetian diplomat said of Henry at that time, “His Majesty is the handsomest potentate I ever set eyes on; above the usual height, with an extremely fine calf to his leg, his complexion fair and bright, with auburn hair, combed straight and short in the French fashion, and a round face so very beautiful that it would become a pretty woman, his throat was rather long and thick.”

Thomas More described the new Queen as, “Ah, but the lady! Take my word for it, she thrilled the hearts of everyone: she possesses all those qualities that make for beauty in a very charming girl. Everywhere she receives the highest of praises; but even that is inadequate.”

By all accounts, this was a love match. It endured longer than all of Henry’s five other marriages put together. No matter what came after, Henry referred to himself as her “Sir Loyal Heart” during jousts and tournaments for many years, and seemingly meant it.

He also wrote to her father stating, “The bond between us is now so strict that all our interests are common, and the love I bear to Catherine is such that if I were still free, I would choose her in preference to all others.”

Of course, a King needs heirs and spares and that proved to be difficult for the pair. Catherine had little trouble conceiving, but keeping the pregnancy was another matter. Her first child, a girl, was born prematurely and did not survive. Her second pregnancy produced a healthy son, called Henry, but he died when he was just 52 days old. Another miscarriage followed, then the birth of another son who died after just a few days. Finally, Catherine gave birth to a girl named Mary, who would survive into adulthood. There are two more recorded miscarriages after Mary’s birth.

In the end, the lack of living sons caused the marriage to deteriorate. Henry even started believing the marriage was cursed, owing to him having broken Levitical law by marrying his brother’s wife. Ultimately, he began looking for a way out of the marriage and for another woman to provide him heirs.