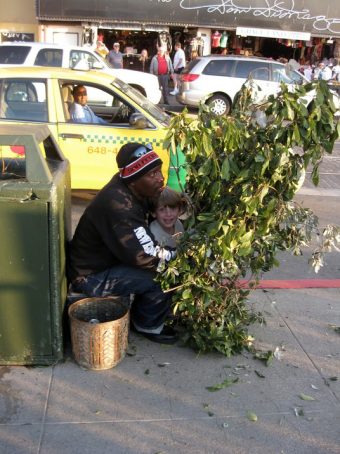 Popping out and up from behind large, camouflaging eucalyptus branches, the Bushman of Fisherman’s Wharf has been a San Francisco Institution for more than thirty years.

As entertaining for the initiated as it is startling for the naïve, the Bushman’s antics have made him a favorite entertainment for many, and often crowds of onlookers can be seen watching him work. Accordingly, the Bushman calls himself an entertainer and even has a class 7 business license from the City of San Francisco.

However, not everyone is good-natured when startled with branches and nonsense. In fact, in 2004 after receiving dozens of public nuisance complaints, the San Francisco prosecutor brought misdemeanor charges against Mr. Johnson. After a four-day trial in which more than 12 witnesses testified (including one who was flown in), the jury acquitted him; since then, no further charges have ever been brought. Nonetheless, as a result, the Bushman toned down his antics and apparently agreed to “lay off the kids and the old people.”

A few of the offended must have taken it to the next level, however, because in 1999 Bushman Johnson hired a bodyguard, former short-order cook, Gregory Jacobs. The pair worked together for several years. Outside of bodyguard duties, Jacobs let Johnson know who was coming, as well as distracted people before Johnson jumped out at them to increase the shock value. After Johnson scared his mark, Jacobs would also pester them into paying up: “Hey, the Busman got you fair and square! Pay the man,” significantly increasing donations.

Jacobs even established a fee schedule, with still photos at $1 and videos at $2.

Jacobs ultimately struck out on his own to become a Bushman, just down Jefferson Street from Bushman Johnson. Not in the best of health, by 2009 Bushman Jacobs had claimed to have lived through 9 heart attacks, and on February 24, 2014, he died of heart failure in his home.

Shortly after his death, reports of the original Bushman’s demise were greatly exaggerated as many had failed to realize that there were actually two Bushmen at this point.

A lucrative business, the Bushman has claimed that he earns up to $60,000 in a good year from his street antics.

This might all have you wondering how he came up with such a street performance idea.  Johnson formerly worked as a shoe shiner and thought wearing some sort of a costume would attract more attention and potentially get more customers to his street shoe-shining business. This worked, but too well.  Soon all the other shoe-shiners in the area were wearing the same costume as he had come up with (a robot costume).  He then came up with the new angle of hiding behind some bushes and jumping out at people… And the rest is history.