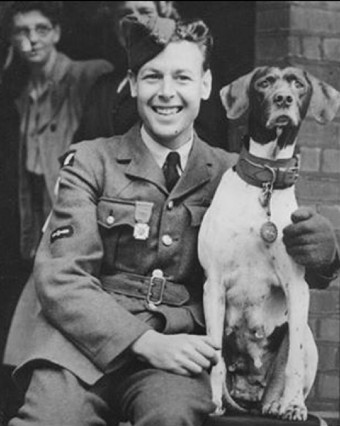 In 1936, the crew of the British gunboat HMS Gnat lacked a mascot, and the captain and crew decided to remedy that situation before starting patrols on the Yangtze River. Their sister gunboats, the Bee, Cicada, and Cricket already had mascots of their own. So Lieutenant Commander J. Waldergrave and Chief Petty Officer Charles Jefferey purchased an English Pointer puppy they named Judy from a kennel in Shanghai, China, intending for her to both serve as mascot and as a gundog for hunting when the crew went ashore. The ship’s cook, Jan “Tankey” Cooper, was assigned the responsibility of caring for her.

Fast-forward to the start of WWII and the HMS Gnat was recalled to port where Judy joined the crew members who transferred to the HMS Grasshopper in June of 1939.

Three years later, the Grasshopper was struck by a torpedo and the crew abandoned ship. Judy proved her worth when she joined the crew on an uninhabited island off of Sumatra. At first, the men were unable to find freshwater, but Judy’s sensitive nose led her to a point in the sand near the shoreline when the tide was low. She then began to dig until ultimately uncovering an underground freshwater spring, providing clean drinking water to herself and the survivors.

A few days later, the crew managed to “commandeer” a Chinese junk and set off to Sumatra. Once there, they began a 200 mile trek to the British-held Pedang; Judy, of course, went with them. They hoped to arrive in time to join the British evacuation of the area, but they missed the final boat and instead walked right into a Japanese-controlled village on their way.

Now captured, the bedraggled soldiers were transported to the Gloergoer POW camp. Not wanting to leave their mascot behind, the crewmen hid Judy beneath empty rice sacks during the journey.

Royal Air Force Leading Aircraftman Frank Williams was among the POWs housed at the camp located in Medan, Indonesia. With food scarce in the camp, Williams observed Judy sniffing around and snatching up maggots tossed from rations for a few days; the hungry dog pulled at his heartstrings. He later stated, “I remember thinking what on earth is a beautiful English Pointer like this doing here with no one to care for her. I realised that even though she was thin, she was a survivor.”

So one afternoon, he laid his entire ration of rice on the ground for Judy to eat. She wolfed it down before laying herself at his feet. From then on, she was his constant companion and the rest of the prisoners soon referred to her as his dog.

Judy’s position at the camp was a treacherous one, however. She often interfered whenever the Japanese guards began beating a prisoner, snapping and growling at them, which just resulted in the guards focusing their attention, and aggression, on her.

Needless to say, Williams and the other prisoners feared for Judy’s safety. They believed it was only a matter of time before the guards followed through on their frequent promises to kill the dog. So Williams came up with a plan. Knowing that the commander of the Gloergoer camp would often get drunk, and become quite friendly when he was in that state, Williams waited for such an occasion before approaching him and convincing the commandant to give Judy official POW status. He sealed the deal by offering the commander one of Judy’s puppies as a gift for his local mistress.

The plan worked. Judy became the only official canine POW during World War II- Prisoner of War 81A Gloergoer, Medan. From there on out, while guards could, and did, still occasionally beat her when she interfered with them, they were reluctant to kill a POW.

The Japanese transferred Williams and other members of the Grasshopper’s crew to Singapore in June of 1944. Before the move, Williams spent several days training Judy to stay completely silent and still inside a rice bag. In this way, Judy was again smuggled with them, lying in a rice bag for three hours while Williams stood with other prisoners on the deck of the SS Van Warwyck before they set off.

The ship never made it to Singapore, however. At 12:42 p.m. on June 26th, it was torpedoed by the British submarine HMS Truculent. After the torpedoes struck, chaos reigned among the prisoners and crew. According to Williams, the only one that kept her head was Judy. “[She] was incredibly calm and was motionlessly waiting for me to move.”

Thinking quickly, Williams grabbed Judy and pushed her out of a small porthole on the rapidly sinking ship. Before dropping to the water about 15 feet below, Williams stated, “[She] looked down and back at me with a sad look. I immediately understood her: She thought I was nuts! Then she wrenched herself with curled up rear paws through the porthole. The hole was just wide enough and with a last push she disappeared from sight.”

Williams couldn’t fit through, but managed to find another way off the boat and then swam around looking for Judy for some time. He later recalled, “As far as the eye could see, the sea was filled with wreckage being dragged away by the fast currents. Somewhere in there, Judy was swimming.” After unsuccessfully being able to locate Judy, he eventually made it back to land, but was recaptured and sent to another prison camp.

While being recaptured and once again finding himself in a POW camp wasn’t exactly a good thing, this time there was a silver-lining. When he reached the POW camp in Sumatra, he stated

I couldn’t believe my eyes. As I entered the camp, a scraggy dog hit me square between the shoulders and knocked me over! … I’d never been so glad to see the old girl. And I think she felt the same!

Williams and Judy managed to survive a backbreaking year in Sumatra before the war ended in 1945.

Upon being released, however, another problem arose.  The ship that was to carry them back to Britain, the S.S. Atenor, did not allow animals. Unwilling to leave her behind, Williams smuggled Judy aboard while a few other POWs distracted the guards.

Her arrival in Britain wasn’t initially as anticipated either, as she was immediately seized by officials from the Ministry of Agriculture and spent her first six months on British soil in quarantine. During that time, Judy’s story spread and for her work in the war, she ultimately received the PDSA Dickin Medal, the animal equivalent of the Victoria Cross, awarded to animals who demonstrate “conspicuous gallantry or devotion to duty while serving or associated with any branch of the Armed Forces or Civil Defence Units.”

Besides the medal, she was also the recipient of a serious amount of fanfare that included being “interviewed” by the BBC and having a ceremony held honoring her service on May 3, 1946 in Cadogan Square. Her official medal citation read,

For magnificent courage and endurance in Japanese prison camps, which helped to maintain morale among her fellow prisoners and also for saving many lives through her intelligence and watchfulness.

Judy spent the rest of her life with Williams and continued her globetrotting by traveling with him around Africa. She was ultimately “put to sleep” on February 17, 1950 at the age of 13 as her health had declined significantly due to a mammary tumor.  Williams buried her in an RAF coat he’d made specially for her, as well as erected a small memorial in her honor.