This Day in History: June 4th- The Ladies’ Man 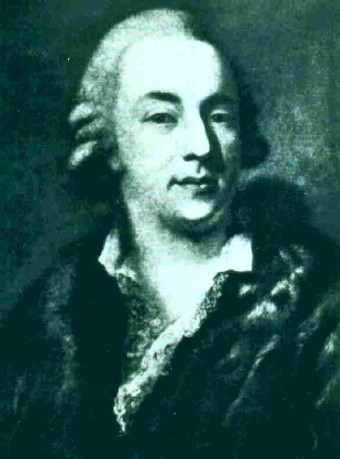 Casanova started his life destined for the priesthood. He studied at Padua University and went to work for Cardinal Acquaviva, second only to the pope in terms of power and influence. The young cleric lost his position over a scandal involving a young lady. He left for Constantinople and Corfu, beginning a lifelong penchant for world travel. Among other things.

Living by his wits, charm, and exceptional good looks, Casanova made his way across Europe, as comfortable in royal circles as he was among the seedy, criminal underbelly. He suffered a minor setback in his twenties when he was imprisoned in Venice as a Mason and for practicing the black arts, but he made a dramatic escape over the jail’s roof and high-tailed it to Paris. Once there, he began styling himself as Jacques Casanova, the Chevalier de Seingalt.

Of course, it’s Casanova’s amorous exploits that have made him a legend. According to his memoirs, he lost his virginity in a ménage a trois with two lovely young Venetian ladies, one of whom was soon to be married. Another of his lovers was a woman disguising herself as a castrato so she could perform as a singer. She also secretly bore Casanova’s son.

Casanova broke many a naïve virgin’s heart by promising her his undying love, and then hitting the road once the deed was done. He claimed he had to feel some spark of physical and mental attraction for a woman to bed her, but seemingly had no trouble hunkering down with a prostitute or a stranger for a quickie.

By 1760, his debts had piled up, and it was time to move on from Paris. Casanova traveled all over Europe. He talked up the benefits of a state-run lottery to King George III in England with little success. He left the country with nothing to show for his troubles but a raging case of VD.

He settled in Venice in the 1770s, where he acted as a spy and an informant for the city inquisitors until 1782. Having squandering much of his fortune, Casanova lived in the chateau of Dux from 1785 in the service of the young Count von Waldstein, a fellow Freemason and occultist. While working as a librarian, he also penned his 3,700 page memoir, which is not only a juicy account of Casanova’s many sexcapades, but also a fascinating glimpse of European Enlightenment society.

As for his reasons for writing the work, he stated:

I begin by declaring to my reader that, by everything good or bad that I have done throughout my life, I am sure that I have earned merit or incurred guilt, and that hence I must consider myself a free agent. … Despite an excellent moral foundation, the inevitable fruit of the divine principles which were rooted in my heart, I was all my life the victim of my senses; I have delighted in going astray and I have constantly lived in error, with no other consolation than that of knowing I have erred. … My follies are the follies of youth. You will see that I laugh at them, and if you are kind you will laugh at them with me…

I expect the friendship, the esteem, and the gratitude of my readers. Their gratitude, if reading my memoirs will have given instruction and pleasure. Their esteem if, doing me justice, they will have found that I have more virtues than faults; and their friendship as soon as they come to find me deserving of it by the frankness and good faith with which I submit myself to their judgment without in any way disguising what I am.

Casanova died on June 4, 1798. His last words were reportedly, “I have lived as a philosopher and I die as a Christian.” He was buried just outside Dux in the graveyard of St. Barbara’s church, but the exact location of his final resting place has been forgotten.