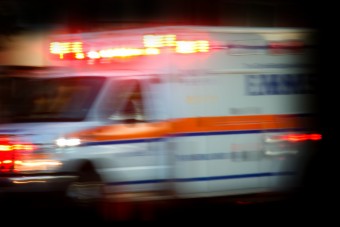 Subject to the same rules of the road as other drivers, with a few exceptions for emergencies, ambulances can be pulled over and ticketed for speeding and other traffic violations, although it is exceedingly rare.

Generally speaking, ambulance drivers should observe all traffic laws and regulations; however, some of those laws are waived when the ambulance needs to respond to an emergency (sometimes called “Code 3”). Typical exceptions (which usually apply to other emergency response vehicles like fire trucks as well), include: (1) allowing the vehicle to park or “stand” pretty much anywhere the driver puts it; (2) blowing red lights and stop signs – after ensuring it’s safe to do so (and slowing down); (3) driving in the “wrong” lane or the “wrong” way up a street or through an intersection; and (4) exceeding the maximum speed limit.

Depending on the jurisdiction, with the exception concerning speed, some limit it to 10 miles per hour (mph) over the speed limit, others 15 mph, and still others leave it to the driver’s discretion “so long as (s)he does not endanger life or property.”

In addition, again depending on the location, many states and localities require that the vehicle “make use of visual signs,” i.e. have its lights on and some may prefer the siren to be blaring as well. However, even in places where the siren is supposed to be on, medics may choose to turn it off, since the sound may disturb some patients (as one EMT said, it “makes the patient freak out.”)

Note that some of the exceptions to the basic traffic laws have vague language, and the interpretation depends on your perspective. According to one EMT whose crew was attempting to reach a site expeditiously, the driver chose to “oppose traffic” (presumably drive the wrong way down the street) for about 300 feet, driving about 15 mph; obviously, that driver made the judgment call that do so was safe.

Unfortunately for him, a police officer who observed this made a different judgment call, that it wasn’t, and pulled the ambulance over; while she did not give the ambulance driver a ticket, she did hold it at the location well past the time for the call and, we can only hope, another ambulance was dispatched to the emergency.

In a 2009 incident in Oklahoma, an ambulance that did not have its lights or sirens running was pulled over by a state trooper after it failed to give the trooper the right of way when he was attempting to respond to a call. According to the trooper, the ambulance driver also flipped him off, so the trooper pulled him over.

It turned out that the ambulance was transporting a patient, but was not running either the lights or the siren in an effort to keep the patient calm. So, as soon as the ambulance stopped, the lead medic emerged from the ambulance to discuss the situation with the trooper, but the latter was too incensed to listen. An altercation ensued, which escalated to the point where the trooper grabbed the medic by the neck. The incident was caught on camera (by the patient’s family who were travelling behind the ambulance), and the trooper was suspended.

Historically, the medical community has held to the belief that there is a “golden hour,” in which serious trauma patients who make it to a hospital within 60 minutes of being injured are much more likely to survive, and that the faster the patient makes it to the ER, generally, the better.

For example, some say that Princess Diana, who died in 1997, could have been saved had the ambulance not taken 40 minutes to transport her to the hospital (some say it could’ve made the trip in 5 minutes, but took so long due to French emergency procedures).

However, recent research is challenging the assumptions behind “faster is better,” in regards to the “EMS interval.” In a 2010 study published in the Annals of Emergency Medicine, after looking into the time it took over 3,000 trauma patients to make it to the hospital and their outcomes, the study revealed that, extremely counter-intuitively, “shorter intervals did not appear to improve survival.”

However, according to the Chairman of the London Ambulance Service, Sigurd Reinton, even a minor delay from things like speed bumps kills numerous people every year by slowing emergency vehicles. This is a notion backed up by a study done by Ronald Bowman in Boulder, Colorado that indicated that for every life saved by various traffic slowing measures like speed bumps, an astounding 85 people die because of this slowing effect on emergency vehicles, whether inherently, like in speed bumps, or by jamming up traffic.