This Day in History: May 13th- Two Dozen Roses 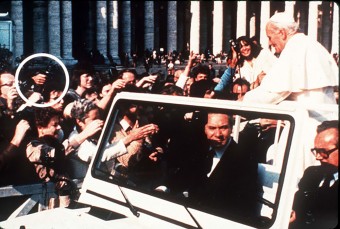 On May 13, 1981, Pope John Paul II was shot while passing through St. Peter’s Square in Rome. The pontiff was on the way to hold his weekly public audience. After the shooting, the gunman’s weapon was knocked out of his hands by onlookers who restrained him until police could arrive.

John Paul II, the first ever Polish pope who broke the 456-year Italian monopoly of the papal throne, sustained a wound to his abdomen and his left hand. A third bullet seriously injured an American woman, and a fourth hit a Jamaican woman. The pontiff required five hours of surgery that left him in critical, but stable, condition. After three weeks, the pope was fully recovered and discharged from the hospital.

Four days after the attempt on his life, he offered forgiveness to his attacker, 23-year-old Mehmet Ali Agca, who was involved with the Grey Wolves, a right-wing Turkish nationalist organization. The group was thought to be behind the deaths of hundreds of union organizers, activists, public officials and others of a leftist bent.

Mehmet Ali Agca was charged with the February 1979 murder of liberal newspaper editor Abdi Ipekci, but he escaped from prison in November 1979 while awaiting trial. He left a letter behind in his cell regarding Pope John Paul II’s upcoming visit to Turkey which read:

Western imperialists who are afraid of Turkey’s unity of political, military, and economic power with the brotherly Islamic countries are sending the Crusader Commander John Paul under the mask of a religions leader. If this ill-timed and meaningless visit is not called off, I will definitely shoot the pope. This is the only reason that I escaped from prison.

Not a lot of gray area there. Security was tightened in Turkey when the Pope came a-callin’, and all went smoothly. Agca was convicted of murder in absentia since no-one knew where he was.

Then on May 9, 1981 Agca flew to Milan from Majorca under an assumed name. On May 13, he entered St. Peter’s Square and shot the Pope. He was carrying a note (this guy was big on notes) stating: “I am killing the pope as a protest against the imperialism of the Soviet Union and the United States and against the genocide that is being carried out in Salvador and Afghanistan.”

Again, Agca spells it all out for us. He insisted he acted alone, pled guilty, and was sentenced to life in prison. He served his sentence until Italy pardoned him in 2000 at the request of Pope John Paul II. He was then extradited to Turkey, where he was jailed until 2010.

Although Agca claimed the assassination attempt had been a solo effort, years later he stated the attack was the brain child of Soviet and Bulgarian secret services. An investigation conducted in 2006 by an Italian parliamentary commission backs up his assertion; the team concluded that the shooting had been planned by former Soviet leaders “beyond a reasonable doubt.”

In December 2014, Mehmet Ali Agca traveled back to the Vatican to pay his respects to the late Pope John Paul II. He stood in silence by the Pontiff’s tomb in St. Peter’s Basilica for several minutes and left two dozen white roses.

“I felt the need to make the gesture,” Agca explained.