May 4, 2015 Melissa
Marcus asks: Where did the words flotsum and jetsum come from? 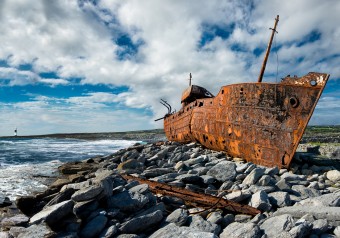 Bumping into a rock or a reef, war, swamped by rough weather or high waves, pilot error or pirates, there are a variety of ways a ship can sink. After it does, depending on whether it floated out on its own, was thrown overboard or sank to Davy Jones Locker, the equipment, cargo and bits of ship that leave a wreck have distinct names, with the distinction classically being important in maritime law.

Flotsam denotes that wreckage from a ship that is later found floating on the sea’s surface. The word traces its roots to the early 1600s and the Anglo-French floteson, which derived from the Old French flotaison (meaning “a floating.”) The word in English was spelled flotsen until the mid-1800s, when it took on its modern variant.

Jetsam, first seen in the mid-1500s, is the stuff that was purposely thrown off a ship by its crew to lighten its load (usually during troubling times), and is washed ashore. The word is a modification and contraction of the Middle English jetteson, itself from the Anglo-French getteson and Old French getaison (meaning “a throwing.”)

As for the often more figurative expression “flotsam and jetsam,” this appears to have popped up around the early to mid-19th century, with one of the earliest known documented instances, according to the OED, appearing in the June 1, 1861 edition of All Y. Round: “Turkey buzzards were searching for flotson and jetson in the shape of dead Irish deck hands.”

As for other similar shipwreck terms, any wreckage from a ship that sinks is lagan (ligan), a word that apparently derives from an Old English (500-1150 AD) word that meant, among other things, to lie down and be at rest.

Wreckage that sinks to the ocean floor and has no hope of recovery is called derelict; this word traces its origins in English to the 1640s and is derived from the Latin derelictus for solitary and deserted. Its meaning of an abandoned vessel may be traced back to the 1660s.