The Origin of DNA Testing 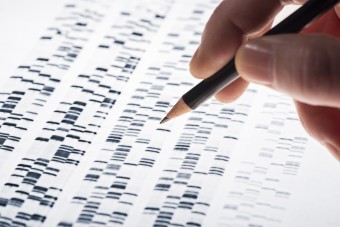 On September 10, 1984, geneticist Alec Jeffreys, 34, was working in his lab at the University of Leicester, in central England. More precisely, he was in the lab’s darkroom, studying an X-ray that had been soaking in a developing tank over the weekend. The X-ray was the result of a process through which recently discovered DNA sequence anomalies appeared on a sheet of film as rows of black lines interspersed with blank spaces- almost like bar codes. The particular X-ray he was looking at showed DNA “bar codes” from three people: one of his technicians and her mother and father.

Jeffreys had no idea what to expect from the X-ray- he was just inventing the process, hoping to see evidence of change to specific regions of DNA between the parents and their daughter.  But after looking at the blurry mess of dark and light spaces for a few moments, he suddenly realized that, completely by accident, he had discovered a way to tell if people were related. “It was an absolute Eureka moment,” he told a reporter in a 2009 interview with The Guardian newspaper. “It was a blinding flash. In five golden minutes, my research career went whizzing off in a completely new direction.”

What Jeffreys saw in that blurry X-ray: 1) each of the three family members had their own unique “bar code,” 2) all three of the family members’ bar codes related to one another (which makes perfect sense, as each of us gets our DNA as a combination of our parents’ DNA), and 3) the relationships were plainly visible. Jeffreys quickly realized that his findings would have implications regarding paternity.  With such technology you could prove with scientific certainty whether someone was- or wasn’t- someone else’s child. Or even whether they were closely related. The technology could also be of use in criminal cases where the perpetrators left blood or other biological evidence behind.

Jeffreys had apparently discovered something extraordinary- but what to do with it? Surely it would take decades for it to have any applications in the real world, he thought. So he simply kept working on what he dubbed his “DNA fingerprint” process, trying to improve it. Meanwhile, he wrote a scientific paper titled “Individual-Specific Fingerprints of Human DNA,” which was published in the scientific journal Nature in July 1985.

Two weeks later, he got a phone call.

The call came from a London lawyer who told Jeffreys she’d read a newspaper article about his “DNA fingerprinting” and wondered if it could be used in an immigration case she was handling. A British-Ghanaian woman’s 13-year-old son had gone to stay with her estranged husband in Ghana for some time, and when he returned, British authorities didn’t believe it was him. They thought the family was trying to sneak someone else- possibly a cousin- into the country on the son’s passport, and they wanted to deport the boy. Could Jeffreys prove that the child was the woman’s son?

Jeffreys agreed to give it a try. He took blood samples from the mother, three of her other children, and the boy in question, and made DNA bar codes for each of them. His conclusion: The boy was definitely the woman’s son. The lawyer presented the evidence to the British Home Office, and even though DNA testing had never been used in a case before, they were convinced. The boy was legally accepted as the woman’s son and allowed to stay in the country. Not only that, British immigration officials said they would allow DNA testing to decide any future cases that had paternity questions. The British Home Office had, perhaps without realizing it, made the brand-new, still not widely understood use of DNA testing a legally legitimate procedure.

In November 1983, the body of 15-year-old Lynda Mann, of Narborough, Leicestershire (not far from where Jeffreys worked), was found.  She had been raped and strangled. Three years later, in July 1986, the body of 15-year-old Dawn Ashworth, of the nearby town of Enderby, was found. She too had been raped and strangled.  Evidence taken from both crimes showed only that the attacker in both cases had the same blood type.

Shortly after the second murder, Richard Buckland, a 17-year-old kitchen porter, was questioned by police. During interrogation he appeared to know facts about the crimes that only the killer could have known. He was arrested and subsequently confessed to the second murder. Police were convinced he had committed the first murder, too, but he insisted he had nothing to do with it.

Having heard about the paternity case that Jeffreys had solved, police investigators asked the scientist to help them identify Buckland as the murderer of Lynda Mann. Jeffreys agreed to help. He extracted DNA from semen left at both crime scenes, and from a blood sample taken from Richard Buckland, then ran them through his process, made the bar codes, and established that one person had indeed carried out both attacks… except it wasn’t Richard Buckland.

Nobody was more disappointed than Jeffreys. “As a man with a young family, living in the local area,” Jeffreys told the BBC years later, “I was as keen as everyone else that our discovery should catch the killer. We couldn’t believe what we were seeing. We’d tested and retested our findings.”

With Buckland off the hook, police were left with no suspects at all, so they decided to try something that had never been done before. In early 1987, they put out a call asking all male residents of the villages of Narborough and Endbury between the ages of 17 and 34 (about 5,000 men) to voluntarily submit to a DNA test. Some objected, seeing the request as an almost science-fiction-like infringement of their privacy rights. But most of the men, understandably distressed by the idea that a vicious killer might be in their midst, were behind it wholeheartedly.

Nearly all 5,000 men in the region voluntarily gave blood. And while Jeffreys’s new forensic technology didn’t solve the crimes directly, in the end it did help nab the killer.  A man named Ian Kelly was overheard boasting in a pub that he’d been paid to give a blood sample in someone else’s name. Police interrogated Kelly, then arrested a 27-year-old Leicester baker with the distinctive name of Colin Pitchfork. Pitchfork confessed immediately, and later pleaded guilty to the rapes and murders of both Lynda Mann and Dawn Ashworth. He was sentenced to life in prison with a minimum of 30 years served.

Christiana and Andew Sarbah (the mother and son in the paternity case) were the first people in history to have a paternity case solved through DNA testing. Richard Buckland was the first person to be proven not guilty of a crime through the use of DNA, and Colin Pitchfork the first person convicted of a crime as a result of DNA testing. News of these events made global headlines. Within a year, DNA fingerprinting- now known as DNA profiling- was being used in the United States, and in just a few more years it was considered a standard part of forensics almost everywhere in the world. And not just to find out whodunnit- but also to determine who-didn’t-dunnit.

Jeffreys is still a professor at the University of Leicester, although he is now known as Sir Alec Jeffreys. He was knighted by Queen Elizabeth II in 1994 for “Services to Science and Technology.” He has received numerous other awards for what turned out to be one of the most momentous scientific discoveries of modern times. And it brought him some well-deserved fame: “Literally every two or three days I get an e-mail,” he said in 2009, “mainly from the States, from school kids saying, ‘I’ve got to do a project on a famous scientist, so I’ve chosen you,’ and I love that. I always respond.”