Glowing in the Trenches 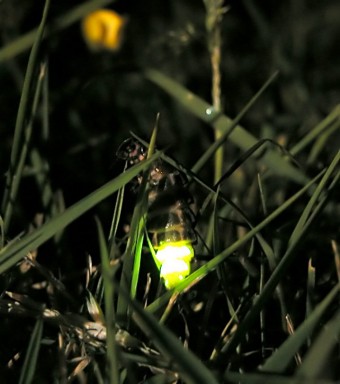 During WWI, when an Allied soldier wanted to read a map or letter at night, his choices were very limited- wait until it gets light, or risk exposing himself to enemy fire by firing up something like a bright lamp or lighter, if he had one. However, there was a seldom discussed third choice that was readily available- gather up a few glow-worms.

The usual method was to pluck up enough glow-worms to suit your particular lighting needs and put them into a jar or bottle. Though the strength of the glow tended to vary, even just a few of them was usually enough for a given soldier to read a letter or map without being too bright to risk attracting enemy fire. If you wanted brighter, you could pluck up several dozen choice specimens and have yourself a natural lantern.

As you may or may not know, the word “glow-worm” or “glowworm”, depending on where in the world you are, encompasses a vast array of different creatures. In this case, we’re specifically discussing Lampyris noctiluca, which is also known as the European glow-worm or the firefly, in this piece. But the term, “glow-worm” itself can refer to a number of species including mycetophilidae (fungus gnats), phengodidae (glowworm beetles) and rhagophthalmidae (which are also sometimes known as fireflies).

One thing all of these creatures have in common is that the way they produce light is amazingly efficient. For instance, the way fireflies and similar creatures produce light (See: How a Firefly Glows) is almost 100% efficient, meaning that exceptionally little energy is wasted doing anything but creating light, rather than, say, heat. For comparison’s sake, a standard incandescent light-bulb typically only converts about 5%-10% of the energy pumped into it into light, with the remaining being turned into heat. While LED light bulbs are becoming more and more energy efficient every year (presently as high as 80% more efficient than incandescents), they still haven’t managed to match that of the lowly glow-worm, lumen for lumen.

With this luminescent creature readily available, soldiers throughout the trenches would gather glow-worms up by the thousands as a natural source of light that could be used on the fly (pun-intended).

Of course, while some soldiers may have released their little lighting helpers after the need was over, many-a glow-worm, like so many other living things during this period, had its life shortened due to the war to end all wars. And while the deaths of horses (see: The Horses of WWI), pigeons and dogs (see: Five War Heroes That Also Happen to Be Dogs) that died helping soldiers during the war are well-known and often celebrated, even in film, the more unusual animals and creatures, like the glow-worm, are largely overlooked by history.

That’s not to say they haven’t been officially remembered and thanked. In late 2004, the $1.7 million The Animals In War Memorial was unveiled in  London’s Hyde Park. The memorial is officially dedicated to:

all the animals that served, suffered and died alongside the British, Commonwealth and Allied forces in the wars and conflicts of the 20th century

Included among the mentioned honoured- you guessed it- the glow-worms for providing vital light for soldiers and officers in the trenches.