April 7, 2015 Karl Smallwood
Paul H. asks: Why doesn’t the moon have a cool name like the moons of other planets in our solar system? 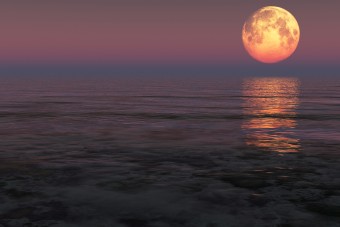 Almost every planet in our solar system and their respective orbiting moons have names taken directly from Greek and Roman mythology. For example, Mars is named for the Greek and Roman god of War, also known as Ares, while its moons, Deimos and Phobos are named for his sons. Likewise, Jupiter is named after Zeus while quite a few of its moons are named after certain of his sexual conquests. This tradition is largely true for every planet in our solar system with the singular exception of the moons of Uranus which are named after characters from the plays of Shakespeare.

The only other exception to this naming convention are the decidedly generic sounding names of the Earth and Moon. Since we’ve already explained how the Earth came to be known as such, that just leaves us with why our largest satellite doesn’t have a more colourful name like the moons of the other planets in our solar system.

As it turns out, the Moon did have other names, notable among them, and in keeping with the naming schema of other local celestial bodies, was one taken from the name of an ancient and powerful deity- Luna, the Roman Goddess of the Moon.

Latin in origin, the word “Luna” is still very much associated with the Moon (as is “Selene”, to a lesser extent, the Greek Moon goddess). For instance, “Luna” is noted as being the root of words like “lunar”. However, “Luna” as a name for the Moon is still pre-dated by early derivatives of the word moon.

In any event, when humans discovered there were other planets out there, we still weren’t sure that these planets had their own moons until four of Jupiter’s satellites were directly observed by Galileo Galilei in 1610.

When humanity first learned of other moons orbiting the planets in our solar system, one of the primary reasons they were given names was to differentiate them from the Moon, which, according to the International Astronomical Union (IAU), the entity tasked with naming every celestial body in the night sky, is still the official name of our moon in English.

What’s more, the naming of the Moon was one of the first things the IAU did when it was formed in 1919, because to quote them, they wanted: “to standardize the multiple, confusing systems of nomenclature for the Moon that were then in use.”

In regards to why the IAU settled on “Moon” instead of one of the more flamboyant names that existed, they stated that since the Moon was the first known moon, and popularly called something like that for millennia in many languages, it was easier to simply make it official than introduce a new name, since their original goal was to make things easier for people to understand, not harder.

And, of course, “Moon” is actually a pretty cool name, only made less interesting by the fact that we’ve applied it as a generic name for the natural, large satellites of other planets.  Had we not done that, “Moon” would have seemed every bit as distinct of a name as “Pluto”, which incidentally was not named after the Disney character, as many have suggested.  Although it was named by an 11 year old girl, helping to give legs to the myth about the Disney origin.

This brings us to the origin of the name of Earth’s favourite satellite, “Moon”.  The word “moon” can be traced back to Old English, where it is said to have derived from the Proto-Germanic word “menon”, which in turn derived from the Proto-Indo-European “*menses”, meaning “month, moon”.  This highlights how far back the association between the Moon and the passage of time goes.