This Day in History: April 23- The Order of the Garter 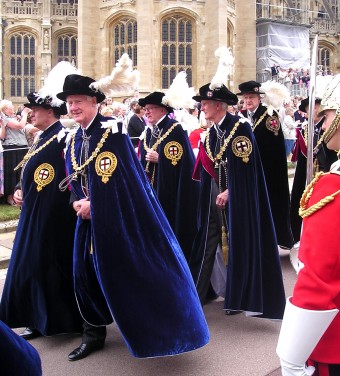 The Most Noble Order of the Garter is the oldest and most exclusive British civil and military honor. At any given time, the Order consists only of the Monarch, the Prince of Wales, and 25 hand-picked knights who have served the country in an exemplary manner, held public office, or have served the King or Queen personally.

The origins of the Order are disputed as the earliest records of its existence were destroyed by a fire. The traditional tale is that Edward III wished to bring back the days of Camelot and King Arthur’s Round Table. On April 23, 1348, he saw the perfect chance to be chivalrous when a lady at court, traditionally believed to be Joan of Kent, his future daughter-in-law, lost one of her garters.

The lady was embarrassed by the snickers from the men nearby when her garter hit the floor. The King gallantly came to her aid as he picked up the garter and fashioned it to his own leg. He then admonished his courtiers with the phrase that remains the Order’s motto to this day: “Honi soit qui mal y pense” or “Evil to him who evil thinks.” The King held a huge feast and joust to celebrate the birth of the Order, and presumably a good time was had by all.

There have been many illustrious knights of the Garter, but membership in such an exclusive club hasn’t always been enough to save a guy from the executioner’s block (36 were beheaded, six by Henry the VIII), or getting the boot. During the WWII, the Emperor of Japan and the King of Italy were stripped of their “extra knight” status, and their swords and crests were removed from St. George’s Chapel at Windsor.

Winston Churchill refused the honor in 1945. His party had just been voted out of office, and he felt he could “hardly accept the Order of the Garter from the king after the people have given me the Order of the Boot.” Churchill eventually relented and was inducted into the Order in 1953.

For most of its existence, the Order was reserved exclusively for the aristocracy, but today Garter Knights hail from various backgrounds. If a vacancy opens up any given year, the lucky newbie(s) is announced on April 23, the anniversary of the Order and St. George’s Day, the Order’s patron saint.

The Knights of the Garter gather together at Windsor Castle every June. Any new knights take their oaths and are given their insignia, and they all break for a nice lunch. Then they don their snazzy blue velvet robes, pin on their gleaming badge of the Order, and adjust their black velvet hats with bouncy white plumes that are worthy of Steven Tyler or a 1970s pimp.

The last lady to be included in the Order up until relatively recently was Lady Margaret Beaufort, the formidable Tudor matriarch – mother of Henry VII and grandmother of Henry VIII. And even this august personage did not enjoy the full honors of membership. Once she died in 1509, it became a Boys Only club, except for reigning sovereigns and one queen consort, Edward VII’s wife Queen Alexandra.

The current Queen, Elizabeth II, decided in 1987 the time had come for equal rights in the Order of the Garter. It’s hardly 50/50, but at least they’re finally included in the ranks.