The Wild and Wacky World of Mating in the Animal Kingdom

April 27, 2015 Melissa
Karen A. asks: How prevalent is homosexuality in animals? Are there any animals besides humans that have members that are exclusively homosexual? 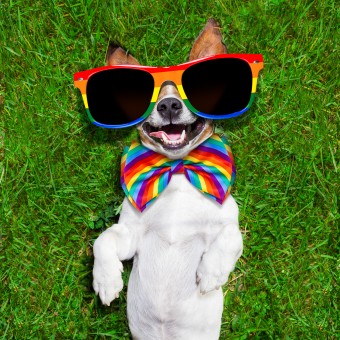 While it is sometimes claimed that only humans engage in bisexual or homosexual relationships, this is far from the truth and the practice is actually quite common in the animal kingdom. For example, nearly 10% of male sheep form such strong attachments that they pair only with other males and never attempt to form sexual relationships with females.

Likewise, several species of dolphins enjoy same sex company, and in fact, at least one pair of male dolphins maintained a 17-year bond. Notably, homosexual and bisexual dolphin relationships are known to be passionate and often stray into the decidedly kinky, including group sex, blowhole penetration and using their bottlenoses to please female partners.

Some insects also exhibit bisexual behavior, although it’s not clear whether this is an orientation or just a case of mistaken identity. Whatever the case, somewhere between 20% and 80% of male dragonflies try to couple, as do a high percentage of male bed bugs, who, as total horndogs, will try to mount any individual of either sex if they have recently fed.

Interestingly, bed bugs reproduce via the male bed bug literally stabbing the female in the abdomen with its hypodermic genitalia, rather than using the female’s reproductive tract.  Once he’s stabbed the female, he then releases his sperm insider her body cavity. The sperm ultimately travel via the female’s blood to sperm storage structures in her body.  As mentioned, the males also are perfectly happy to do the same to other males, with their sexual attraction to one another primarily based on the size of the bed bug.  So if you’re a well fed bed bug, male or female, expect to have males trying to stab you with their genitalia.  However, there is a pheromone the male bed bugs may emit to try to ward off potential stabbers (and predators), consisting of (E)-2-octenal and (E)-2-hexenal.

Some male lions eschew the trend of fighting with one another and, rather, pair up. Lions, generally, are said to have one of the strongest sex drives of any feline and, like some rams, have been known in a few cases to trend towards homosexual, rather than the slightly more common bisexual.

Perhaps the kings of the same-sex relationship world (where there is more than one gender), at least among those animals that can’t fly, are giraffes. In fact, young male giraffes typically start their sexual lives with other males. Observed behaviors include French kissing, neck messages, nuzzling, full-body contact, and penetration with climax. Even into adulthood, it’s estimated that 75% to 94% of the time male giraffes have sex, it is with another male giraffe.  Although much more rare, female giraffes also occasionally get in on the one gender lovin’ with about 1% of female giraffe sexual encounters occurring between two females, rather than a male/female pairing.

Notably, female whiptail lizards can reproduce asexually. However, sexual behavior will stimulate their ovulation, and as such, females often work on this together with one acting out the part of a male during copulation. Interestingly, the one who acts out the part of a female during this simulated mating typically produces bigger eggs than the one playing the part of the male.

Female cattle of all types are frequently observed mounting one another, although, among this hoofed crowd, perhaps the randiest of all are the American bison bulls who are known to take their courtships all the way home and engage in full penetration of their male counterparts.

Likewise, bull elephants bond and mount, kiss, intertwine trunks and place trunks in each other’s mouths. Notably, unlike their heterosexual relationships, which are typically fleeting, homosexual elephants have been occasionally observed to bond for years.

A variety of monkeys and apes enjoy bisexual relationships. For example, more than 60% of all sexual activity among bonobos is between two females, although bonobo males also enjoy each other’s sexual company. This type of bonding is also seen among Japanese snow monkeys, including in about 25% of females.

Perhaps the largest class of animals with these sort of preferences is found in birds. For instance, male mallards, after their female partners lay eggs, are often observed pairing up, as are male American white ibis (although some opine homosexuality and bisexuality in the latter may be due to endocrine blocking pollution).

On the other hand, a large proportion of Laysan Albatross females may trend towards lesbian. In a 2007 study of a colony in Oahu, it was observed that 31% of all the pairs were lesbian, and these lady birds were also seen kissing bills and nesting. Similarly, some species of gulls have a large number (up to 14%) of female-only pairs.

In addition, it has been known for over a century that penguins have homosexual relationships (although the earliest documented report in 1911 was suppressed at the time and only released in 2012). One famous seemingly gay pair lived in the Central Park Zoo in the 2000s, and after they were given an egg to incubate, the couple hatched and raised an adorable little lady penguin. However, in some of these cases, it’s not clear whether the penguins in question would naturally do this or do so simply due to lack of options in their captivity.

On that note, male vultures can be maternal as well. In 1998, after two bonded male griffon vultures at the Jerusalem Biblical Zoo were observed enjoying “energetic sex,” they were given an artificial egg, which they took turns sitting on; over a month later, it was replaced with a baby vulture that the two raised together. However, a few years later when a lady vulture was introduced, one of the pair took up with her, and the dumped male became depressed. Luckily, after they moved him to another zoo, he found a new partner, this time a lady.