March 4, 2015 Melissa
Sanvi F. asks: It costs thousands of dollars to install even one road sign, so why do they bother putting “warning deer” and “falling rock” warning signs when nobody pays attention to them? 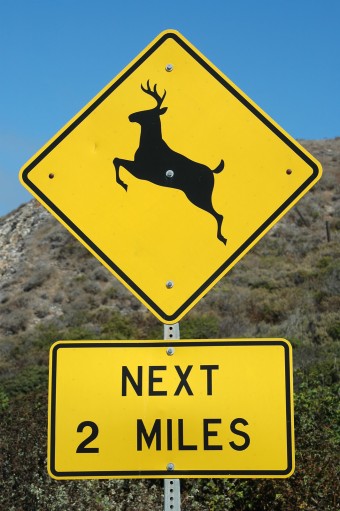 Warning of an upcoming curve, playing kids, falling rock, icy roads and, of course, deer, traditional static warning signs litter the sides of our roadways to the point where they have just become white noise. Often placed arbitrarily, many road warning signs, which can be extremely expensive to install (see Bonus Fact below), are erected more for their ability to shield government from liability than to improve public safety. Ignored by drivers and not supported by scientific research, other than a few limited (and well-planned) exceptions, there seems to be little reason for most traditional road hazard signs.

The most useless static signs are those that warn against occasional perils, such as an icy bridge, deer, or falling rock. In a 2006 study conducted in Kansas, researchers examined 45 different variables in 15 Kansas counties and compared crash rates before and after the installation of deer warning signs. After their exhaustive study (and 149-page report), the researchers concluded that: “there is little or no relationship between deer warning signs and crash rates. . . . static deer warning signs as they have been used in Kansas are not an effective measure for mitigating deer-vehicle crashes.”[1]

Similarly, studies of ice warning signs have been found to be equally feeble: “ice-warning signs do not have a statistically significant impact on the frequency or severity of vehicular accidents that involve ice.”[2]

Aside from the possibility that static hazard signs, by their nature, may simply be an ineffective way to control driver behavior, the authors of these studies have identified two other problems: (1) over-signage; and (2) arbitrary placement. As it was noted in one study: “Too many signs or ice-warning signs posted at potentially inappropriate locations . . . where the ice hazard is rarely present . . . can desensitize drivers, thereby negating any safety enhancement the signs may have.”[3]

Perhaps surprisingly, the reason so many signs are in “inappropriate locations” is due to the fact that the decision-making processes for their placement are, according to one report “vague and arbitrary at best.” In fact, in a survey of 28 state departments of transportation, it was determined that 93% “had not done any evaluation of the effectiveness” of static signs warning of occasional hazards.[4]

So why do they put up the signs? Lawyers and lawsuits. The survey report noted that 20% of the agencies who answered it admitted that “tort liability and litigation [had] an important role in the decision,” to place the signs of infrequent hazards.[5]

It’s important to note that the pointlessness of many road signs is not limited only to those that warn of occasional hazards. In a 2004 report, the National Cooperative Highway Research Program (NCHRP) identified that signs warning of upcoming curves also suffered from over-proliferation (causing desensitization), arbitrary placement and overall ineffectiveness; as with other static signs, the report revealed that “many highway agencies prefer to use traditional advance warning and curve signs even if research indicates [they] may be ineffective . . . because of tort liability concerns.”[6]

Regardless of the frequency of the hazard, the ineffectiveness of all of these signs is troubling. In a 2007 report summarizing research of the effectiveness of “Children at Play” and similar signs, the authors revealed that, “there is no evidence that special warning signs of this sort reduce driver speeds or crash rates. This is the unanimous conclusion of many credible sources we located on this topic.” Startlingly, these authors also noted that rather than improving public and child safety, because the signs give drivers little guidance, they may actually make things worse: (1) by giving a false sense of security to parents and children in those areas where signs are posted; and (2) by giving the impression that there aren’t children playing in areas that don’t have signs.[7]

All that said, there is some evidence that, in certain situations, judiciously adding signs can reduce accidents. Between 1992 and 1998, Mendocino County, CA saw a 42.1% reduction in crashes after installing new signs. How?

Although it’s not entirely clear why Mendocino County’s signs were so effective when so many others were useless, there were a few unique factors to the California program that may explain the difference: (1) it appears that prior to their 1990s efforts, few signs had been posted; (2) the county’s roads were particularly treacherous; and, perhaps most importantly, (3) significant thought and research went into the placement of each sign.

Located about 100 miles north of San Francisco, Mendocino County was mostly rural with a relatively small population (90,000) when the program began. Criss-crossed by many secondary, curvy roads, some with no centerlines or shoulders, before the signs went up, the county saw a lot of motor vehicle accidents (601 in 1992).

To deal with the problem, the county retained the services of a civil engineer who established a comprehensive system of review of the county’s roads. For each area studied, the reviewer examined each crash report for that stretch of road during the preceding three years. By doing so, they determined not only why crashes occurred, but also where a sign could helpfully warn of any hazards. Remarkably successful, after the signs went up, in 1998 there were only 348 crashes; the county later estimated it had saved more than $12 million by not having to respond to the avoided accidents.