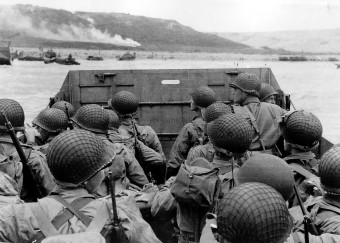 The Battle of Normandy, also known as D-Day, started on June 6, 1944 and was the beginning of the major invasion of German-occupied Western Europe during World War II. But why was it called “D-Day”?

You might at first be inclined to think the abbreviation is similar to V-Day (Victory Day).  Indeed, one commonly touted explanation given for the meaning of the “D” in D-Day is that it stands for “designated day.” Others claim it stands for “decision day”, “debarkation”, or even “deliverance day.” Even General Dwight Eisenhower, or at the least his assistant, weighed in when Eisenhower received a letter asking for an explanation of the meaning of D-Day. His executive assistant wrote back stating D-Day was a shortened version of “departed day”.

Given Eisenhower helped plan it, that should mean cased closed right? It turns out, most historians think not. And, indeed, the evidence at hand doesn’t seem to support Eisenhower’s (or perhaps just his assistant’s) claim.

Hints of the true meaning can be found long before WWII in a  U.S. Army Field Order dated September 7, 1918. The order stated that “The First Army will attack at H hour on D day with the object of forcing the evacuation of the St. Mihiel Salient.”

In that context, and with numerous combat operations that followed over the years, D-day referred to the “day” on which a combat attack would occur with H-hour likewise referring to the “hour” when an attack is scheduled to happen. Thus, the “D” is just a placeholder or variable for the actual date, and probably originally was meant to stand for “date” or “day” (if anything), if the associated “H-hour” is any indication.

The use of D-day allows military personnel to easily plan for a combat mission ahead of time without knowing the exact date that it will occur. Given that planning for the most famous of all D-day’s in June of 1944 started way back in 1943, and that, due to factors like optimal tides, only a few days in a given month were suitable for the launch of the invasion, trying to fix a firm date in the planning process was pointless, even close to the time of the attack. (In fact, the original set date was June 5, but bad weather at the last minute forced a day delay.) By simply assigning the attack to occur on “D-day”, it solved this issue, and had the side benefit of keeping the date of the attack a secret as long as possible, just one of the many methods of deception the military employed to try to confuse the German brass with regards to the pending invasion.

As for handling the pre-D-day preparations and the plan for after, adding a plus or minus sign and a number after the “D” was used. For example, D-1 would indicate the day before the operation occurring while D+3 would mean three days after the operation. In this way, the plans could be easily overlaid onto a calendar when the military leadership decided on the day of the attack. If the day needed to be switched at the last minute, it was then also easy enough to calibrate the plan to the new date.

As alluded to, the D-Day that occurred on June 6, 1944 was not the only D-day during World War II and it certainly was not the last, as this method of planning for military operations continues to this day. Of course, because the D-day at the Battle of Normandy was, and continues to be, the most famous of all given that designation, it seems unlikely in the foreseeable future that it will be usurped in people’s minds when someone mentions “D-Day”, despite the military continuing to occasionally use this designation.