Who Invented the Piano? 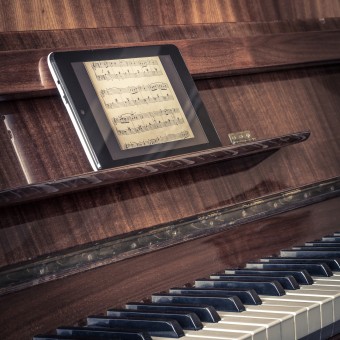 The names that come to mind at the mention of the Italian Renaissance are the likes of Medici, Da Vinci, and Galileo. Few, however, know the name Bartolomeo Cristofori, an accomplished craftsman who lived and worked during that era. You may not know his name, but you do know his greatest invention- the “harpsichord with loud and soft,” better known today as the piano.

Little is known of Cristofori’s family or childhood, other than that he was born in 1655 and grew up in the town of Padua, located in the Republic of Venice. As an adult, besides working on a variety of instruments, he notably was as a harpsichord maker. In this line of work, at the age of 33, he attracted the attention of Ferdinando de Medici, the son and heir to Cosimo de Medici, the Grand Duke of Tuscany. Medici hired Cristofori to help maintain the instruments in his vast collection, as well as to try and come up with some new ones.

However, Cristofori was initially not interested in the position.  In one of the few records we have of the man, he noted that “The prince was told that I did not wish to go; he replied that he would make me want to…” And, indeed, Cristofori was started at a salary greater than his predecessor (who had just died) in the position, making 12 scudi per month and given a fully furnished house, including the tools he’d need to make and maintain instruments.  Eventually, he was also given his own workshop and two assistants, rather than having to share space with other craftsmen who worked for Medici. 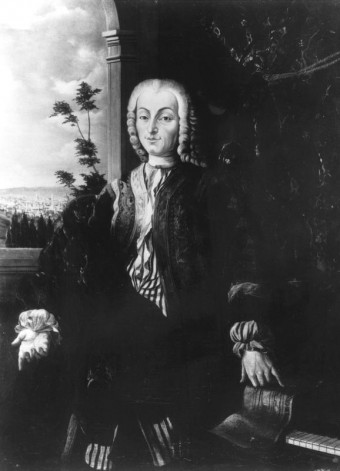 Before Cristofori invented the piano, there was a decided lack of a stringed instrument with a keyboard that offered a range of musical expression and was suitable for public performances. The main options at the time consisted of the harpsichord and the clavichord. Both instruments work by pressing a key on the keyboard resulting in the corresponding string being vibrated. The main issue with these was that the volume of the harpsichord could not be be increased or decreased while it was being played, and the clavichord was simply much too quiet to be used in performances.  As such, it was typically used by musicians for composition and practice. Notably, the design of the piano overcame both of these issues.

As for when Cristofori invented what is today known as the piano, an inventory of de Medici’s musical instruments from 1700 reveals that the first piano was created by this date, though originally called an “arpicimbalo”:

A large “Arpicembalo” by Bartolomeo Cristofori, of new invention that produces soft and loud, with two sets of strings at unison pitch, with soundboard of cypress without rose…

“Arpicembalo,” more or less meant an instrument that resembles a harpsichord (literally: harp-harpsichord). The actual date of invention is thought to have been between 1698 and 1699, and he may have been working on the instrument as early as 1694. However it was not revealed to the public until much later, in 1709.

The invention became known as the pianoforte after the Italian for “soft” and “strong” (piano-forte). It was described as this in the aforementioned original inventory listing (che fa’ il piano, e il forte), and in 1711 a journalist also publicly called the instrument a “harpsichord with soft and loud,” “gravicembalo col piano e forte” (gravicembalo, being a corruption of the Italian name for the harpsichord- clavicembalo). As the ability to make notes softer or louder while playing was one of the distinguishing features of the instrument, it caught on. Later, of course, the name was shortened to simply “piano.”

Drawings and descriptions of the original piano design were published in 1711, and instrument makers all over Europe began attempting to recreate Cristofori’s innovative instrument, most notably Gottfried Silbermann of Germany. Silbermann was so well known for his work with the piano that he is sometimes incorrectly named its inventor.  In truth, while Silbermann played a pivotal role in the history of the piano (and invented the forerunner of the modern damper pedal), he relied heavily on Cristofori’s designs to create his own version of the instrument, with this first version seeming to have been made about a year after Cristofori died.

However, according to 18th century musician Johan Friedrich Agricola, Silbermann’s early work in the piano wasn’t very good. After completing his initial version, Silbermann had Johann Sebastian Bach try it out, to less than glowing reviews. Bach’s criticism of the device spurred Silbermann to develop a better piano, this time attempting to copy Cristofori’s later designs from the 1720s, which contained most of the features included in modern pianos. After copying this version and having Bach try it out, Bach changed his tune on Silbermann’s construction. Among a few other pieces of evidence perhaps lending some credence to Agricola’s story, or at least the part that Bach liked Silbermann’s later incarnations of the instrument, there does exist a receipt from May 8, 1749 that shows Bach helped Silbermann sell one of his pianos. 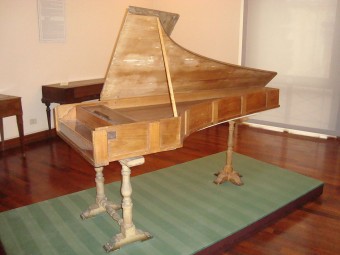 In any event, after he invented the piano, it is thought that Cristofori continued to work for the Medici family, despite the death of his immediate benefactor, Ferdinando de Medici, in 1713. Cristofori himself ultimately died in 1731 at 76 years old, spending the latter portion of his life primarily attempting to improve upon the piano.

Three of his pianos survive to this day. The oldest, dating to 1720, is located at the Metropolitan Museum of Art in New York. The other two also date to the 1720s and reside at the Museo Strumenti Musicali in Rome (pictured right) and the Musikinstrumenten-Museum at Leipzig University.