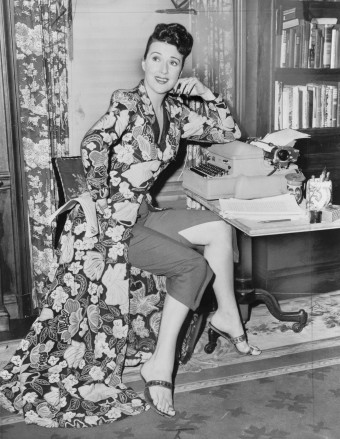 On January 9, 1911, legendary striptease artist Gypsy Rose Lee was born as Rose Louise Hovick in Seattle, Washington. One of the most popular performers of the 1940s and 1950s, Gypsy was much more than a pretty girl who provocatively removed clothing. She was a brainy businesswoman who created a winning persona and a unique approach to burlesque. She has been an inspiration and role model for those who have followed her, such as Dita von Teese.

Louise (as she went by as a child) and her sister, actress June Novac, were at the mercy of one of the original stage mothers from hell growing up. A single parent, she forced her daughters into vaudeville to support the family. She felt June had the most potential, and when she eloped at age 15 in 1928, she thought Louise’s only hope was to go into burlesque.

This was the beginning of Gypsy Rose Lee, the stripper who was just as renowned for her witty banter as she was for shedding her costumes. Why the name Gypsy? When her son Erik Lee Preminger was asked if she ever explained her choice, he replied, “Her favorite line about this is, ‘Darling, I told that story so many different ways, I don’t remember which one is true.’”

Funnily enough, for a person who made a living in burlesque, Gypsy wasn’t all that crazy about taking her clothes off in front of strangers. Author Karen Abbott, who wrote a biography of Gypsy Rose Lee entitled “American Rose: A Nation Laid Bare — The Life And Times Of Gypsy Rose Lee” claims she would laughingly refer to herself as a prude.

Abbott says there’s a lot of truth behind that statement. She explained that Lee, “… had a very complicated relationship with sex. She didn’t consider herself to really be a sexual person, but here she is being held up as a sex object. She was a prude, in the sense that she did not want to expose herself — and that’s both literally and figuratively. It was prudery, but it was also private — she was a very private person.”

And Gypsy was no one trick pony. She also acted in several films, including the 1943 film “Stage Door Canteen” in which she played herself. But her most successful non-burlesque venture was as an author. In 1941, Gypsy wrote a murder mystery called “The G-String Murders”, and went on to pen a second in 1942 entitled “Mother Finds a Body.”

In 1957, Lee published her memoirs, “Gypsy”, which was a more smoothed-over version of her often tragic life (she watered down the cruelty of her mother and the misery of her love life and failed marriages). This optimistic version of her story is what the hugely popular Broadway musical “Gypsy: A Musical Fable” was based on.

In her later years, Gypsy continued to write and contributed many pieces to the New Yorker. She also traveled to Vietnam to entertain the troops. In the end, she died of lung cancer in April of 1970 at the age of 59.