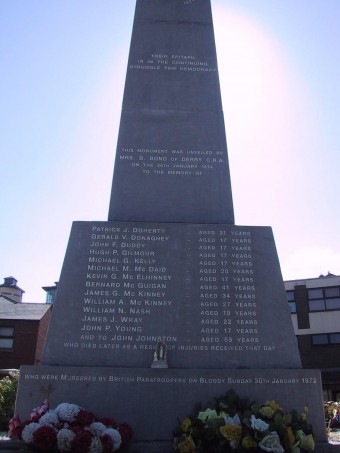 On January 30, 1972, British Army paratroopers shot and killed 13 unarmed demonstrators participating in a civil rights march in Derry, Northern Ireland. The march was in protest of the policy of internment without trial, which allowed the British government to detain suspected Irish nationalists indefinitely. The day became forever known as Bloody Sunday.

The march was organized by the Northern Ireland Civil Rights Association (NICRA) in direct defiance of an order against marching placed on the citizens of Northern Ireland by British officials. Fearing that violence would break out, the Commander of the British Land Forces, Major General Robert Ford, called on members of the of 1st Battalion the Parachute Regiment (1 PARA) to control the march should trouble arise.

When the march began just before 3 p.m. the mood was good, some even describing it as “jovial.” Around 45 minutes later the crowd turned into Rossville St. to converge at Free Derry corner, in the Bogside area of the city. A small numbers of protestors reportedly broke away from the group and began throwing stones at a nearby British barricade. The retaliation included rubber bullets, CS gas, and a water cannon. The skirmish ended quickly and the protestors were diverted back to the main group.

However, with tensions high, a group of British soldiers opened fire, shooting two passersby, Damien Donaghy, 15, and John Johnston, 59. Johnston later died as a result of his injuries. It was later claimed that the soldiers had thought Johnston had been carrying a gun, but photographic evidence, as well as forensic testing, confirmed that he had been unarmed.

The worst was yet to come.

Using eight armored vehicles, the soldiers chased the marchers down Rossville Street to the Bogside. At 4:10 p.m., members of the British forces opened fire on the crowds. After 30 minutes, twelve more people, seven of them teenagers, were dead. Thirteen more were injured – five had been shot in the back.

The British army denied that they had fired the bullets, claiming 1 PARA had been shot at when they entered the Bogside, hinting that an IRA sniper was to blame.  In the end, though, there were no injuries among the British soldiers, but they did manage to shoot a total of 108 rounds between 21 of them.

There were two inquiries held into the events of Bloody Sunday. The first was the Lord Widgery Tribunal in 1972. Commissioned by the British Home Secretary, Reginald Maudling, it more or less absolved the British Army of blame, as “there is no reason to suppose that soldiers would have opened fire if they had not been [fired] upon first.” He also went on to state that if the Irish hadn’t had that illegal march in the first place, no-one would have died. As you might expect, this report, which took a mere eleven weeks to complete, was vilified by many, especially the victims’ families, as the British giving the British a free pass.

A second inquiry set up in response to repeated requests for a new investigation was begun in 1998. It included numerous previously unheard accounts from Bloody Sunday. A comprehensive fact-finding probe that took 12 years to complete and cost approximately two hundred million pounds, it was the longest inquiry in British history.

But for those who lost loved ones on that horrible day, and then had to bear the pain as the British government claimed the soldiers were only acting in self-defense, the outcome could not have been more welcome. The results were finally made public in June of 2010.

Despite the contrary evidence given by soldiers, we have concluded that none of them fired in response to attacks or threatened attacks by nail or petrol bombers. No-one threw or threatened to throw a nail or petrol bomb at the soldiers on Bloody Sunday…. The firing by soldiers of 1 PARA on Bloody Sunday caused the deaths of 13 people and injury to a similar number, none of whom was posing a threat of causing death or serious injury.

Prime Minister David Cameron later stated about the event, “I never want to believe anything bad about our country. I never want to call into question the behaviour of our soldiers and our army, who I believe to be the finest in the world. And I have seen for myself the very difficult and dangerous circumstances in which we ask our soldiers to serve. But the conclusions of this report are absolutely clear. There is no doubt, there is nothing equivocal, there are no ambiguities. What happened on Bloody Sunday was both unjustified and unjustifiable. It was wrong.”