This Day in History: December 31st- A One Armed Drummer 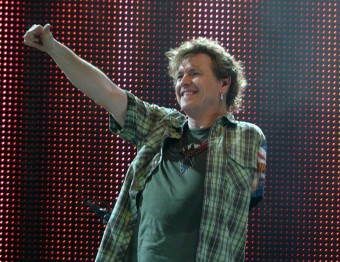 “Perseverance. I guess that would be the biggest thing I learned about myself. But I suppose that had a lot to do with the strength of those around me. They really didn’t give me a choice; I had to stick around and deal with it.” – Rick Allen

In one of the more incredible stories in the history of Rock, Def Leppard drummer Rick Allen lost his left arm in a devastating car accident on December 31, 1984, but managed to salvage his musical career. The wreck occurred in Sheffield, England when the speeding Allen (with a dash of road rage) attempted to pass an Alfa Romeo that had just passed him. In the process, he could not navigate a curve he didn’t see coming and hit a stone wall. His vehicle rolled over several times, ejecting him from the car. His girlfriend, Miriam Barendsen, who was in the passenger seat and properly buckled, suffered no major injuries. (Wear your seatbelts kids!)

A nurse living nearby packed Rick’s arm in ice. Unfortunately, an attempt to re-attach the limb was unsuccessful due to a post-operative infection. Although Rick surviving the accident was nothing short of miraculous, his position as drummer in Def Leppard, one of the biggest bands in the world at the time, was clearly in jeopardy.

Allen said that there was one positive result of his accident – he rediscovered his passion for drumming. He went on to state, “When they first told me what happened, I don’t think I fully understood the situation. I don’t think the permanence of my condition sank into my head until maybe two or three weeks later. But to be honest, prior to the accident, I hadn’t actually played my drums for about a month or six weeks. I was getting very blasé about playing, but when I was in the hospital, one of the first thoughts I had when I came to was that all I wanted to do was play my drums again. That seems a bit strange, seeing that I had been so lazy about my playing.”

With his bandmates cheering him on, Allen channeled his energies into learning to play a customized drum kit that allowed him to use his left foot to trigger the snare drum (normally used for the hi-hats in typical drumsets). Later, with the help of Jeff Rich, he designed a custom electronic drum set suitable for a one armed drummer. In August 1986, just 20 months after his accident, Rick Allen took to the stage with the rest of Def Leppard at the “Monsters of Rock” festival at Castle Donington. In 1987, the band released their long-awaited follow-up album “Hysteria”, which proved to be an even bigger smash than “Pyromania”. Def Leppard remains a relatively popular concert draw to this day.