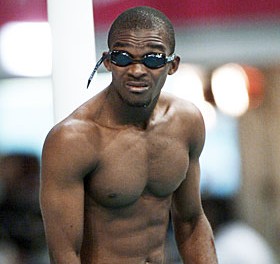 The man was Eric Moussambani Malonga, later nicknamed “Eric the Eel”.  Moussambani is from Equatorial Guinea in Africa and only managed to get into the Olympics at all because of a wildcard drawing system put in place by the International Olympic Committee, designed to try to encourage developing countries to participate in various Olympic events.

Thanks to this drawing, Equatorial Guinea decided to send a swim team to the 2000 Olympics in Sydney, Australia.  They put out an advertisement on the radio a few months before the Games to try to get people to come and tryout for the country’s new national swim team which would be going to the Olympics.  Those who wished to tryout were to show up at the Hotel Ureca in Malabo, Equatorial Guinea. At the time, this hotel was the only place in the country that had a swimming pool (only 12 meters long).

Two people showed up, one woman, Paula Barila Bolopa (who was a grocery store cashier at the time), and one man, Eric Moussambani.  Because of the lack of competition, the only thing the two had to do to get on the team was to demonstrate that they could in fact swim.

Previous to this, Moussambani didn’t know much about swimming, but contrary to what is often reported, he did know how to swim.  Said Moussambani:

They just told me to get my passport and a picture ready so they could send me to the Olympics. They said to me, ‘Keep on training.’ I asked them, ‘With who? I don’t have a trainer.’  They said: ‘Do what you can. Keep training because you are going to the Olympics.’

My preparation was very poor…  I was training by myself, in the river and the sea. My country did not have a competition swimming pool, and I was only training at the weekends, for two hours at a time. I didn’t have any experience in crawl, breaststroke, or butterfly. I didn’t know how to swim competitively.

The Olympic Games was something unknown for me.  I was just happy that I was going to travel abroad and represent my country. It was new for me. It was very far from Africa.

Just three months after hearing the advertisement and then getting selected to represent his country, Moussambani was on his way to the Olympics.  He took a somewhat roundabout flight to Libreville (Gabon), then to Paris, then to Hong Kong, and finally to Sydney, a trip that took nearly three days to complete.  Along with accommodations, he had £50 of spending money while at the games and an Equatorial Guinea flag for use in the opening ceremony.

Once at the Olympics, he got his first glimpse of an Olympic size swimming pool,

When I arrived, I just went to the swimming pool to see how it is. I was very surprised, I did not imagine that it would be so big…

My training schedule there was with the American swimmers. I was going to the pool and watching them, how they trained and how they dived because I didn’t have any idea. I copied them. I had to know how to dive, how to move my legs, how to move my hands… I learned everything in Sydney.

What makes Moussambani’s story even more compelling is that he would go on to win his heat in the 100m freestyle, albeit in a pretty unorthodox way.  You see, at the time, he was to compete against just two other people in the qualifiers, Karim Bare from Niger and Farkhod Oripov from Tajikistan.  Both of these two ended up getting disqualified for false starts, leaving just Moussambani, who at the time thought he had been disqualified, before it was explained to him that his competitors were the ones out and that he’d be swimming the heat alone in front of 17,000 spectators.

In order to qualify for the next round, he needed to beat 1 minute and 10 seconds… He didn’t quite manage that.  However, for someone with such limited training and technique, he actually didn’t do too bad at the very beginning, even executing an OK dive and looking pretty fast for the first 10 or 15 seconds or so, then quickly faded.   As he said,

The first 50 meters were OK, but in the second 50 meters I got a bit worried and thought I wasn’t going to make it… I felt that [it] was important [to finish] because I was representing my country… I remember that when I was swimming, I could hear the crowd, and that gave me strength to continue and complete the 100 meters, but I was already tired. It was my first time in an Olympic swimming pool.

He finished with a time of 1 minute 52.72 seconds (40.97 seconds at the halfway mark), which was about 43 seconds off the qualifying time. This was, of course, a new Equatorial Guinea swimming record, but also unfortunately was the slowest 100m freestyle swim pace in Olympic history.  For his efforts, he was immediately a media darling, with fans and some other athletes loving his story.  However, many felt that his being allowed to participate was embarrassing, as he had not a hope in the world of actually winning anything, and it was unfair to athletes in more privileged countries that could swim circles around Moussambani, but who weren’t given a chance to compete because lesser swimmers from developing countries were being included. The International Olympic Committee’s president, Jacques Rogge, was one of those, saying he would work to get rid of the wild card system and stated, “We want to avoid what happened in the swimming in Sydney; the public loved it, but I did not like it.”

Of course, the “father” of the modern Olympic Games, Baron Pierre de Coubertin, likely wouldn’t have agreed with this negative sentiment at all, as he wanted all countries to compete in the Games. He also once criticized English rowing competitions for not including working-class athletes.  He further developed the Olympic motto (Citius, Altrius, Fortius- Faster, Higher, Stronger) after a portion of a sermon given by Bishop Ethelbert Talbo, which de Coubertin was fond of quoting