Who Invented the Vacuum Cleaner? 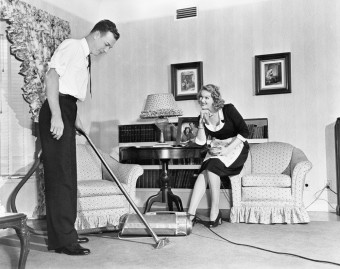 In central Missouri, about hundred miles from St. Louis and right off of Route 66, sits the small town of St. James. Despite this town having only about four thousand people, it is proudly the location for the Tacony Corporation’s vacuum cleaner factory, a giant facility that produces cleaners for 13 different lines and brands, including for Maytag, Riccar, and Simplicity. Sitting on the bottom level of this massive factory is something even more unique, a museum dedicated solely to vacuum cleaners. Tom Gasko is the curator there and will delightfully show off his massive collection of cleaners, ranging from ones from the 1910s all the way to a vacuum cleaner that joined George W. Bush on Air Force One. This fascinating museum takes visitors through the rather unknown history of America’s favorite cleaning machine. Here, now, is that history – how the vacuum cleaner came to be.

People have been cleaning the floors of their domiciles for thousands of years. Brooms, in their most rudimentary and handmade form, were the common tool of choice for accomplishing this. However, it actually wasn’t until Levi Dickenson’s 1797 advancement of the broom that it began to become mass produced. The story goes that Levi’s wife complained often about the brittleness and inefficiency of her handmade broom. So, Levi, being a farmer in Hadley, Massachusetts and all, made a broom for her out of his toughest grains, a variety of sorghum, a stalk of grain used to feed livestock and used in the production of alcohol. In fact, sugar cane is a type of sorghum. These stalks are tough, resilient, and quick to dry – in other words, perfect for a broom. Levi’s wife loved it and so did neighbors, family, and friends. He quickly grew more sorghum to keep up with the broom demand. By 1810, Levi Dickenson had also invented a foot-treadle broom machine, which helped mass produce brooms. By the 1830s, broom factories popped up across the northeast.

While a sorghum-made, mass-produced, reliable broom was nice and all, it still wasn’t particularly efficient. It required a person to sweep for long hours and use a lot of energy. There had to be a better way to clean. There was. It was in 1860, with the United States not so united and on the brink of a Civil War, when a man in West Union, Iowa by the name of Daniel Hess filed U.S. Patent 29,077 for a type of device that would in the not to distant future revolutionize the cleaning industry. In the patent, it is written,

The nature of my invention consist-s in drawing fme dust and dirt through the machine by means of a draft of air, and forcing the same into water or its equivalent for the purpose of destroying it substantially as will be hereinafter specified.

This was the first known vacuum-cleaner. Of course, he called it something different – a “carpet sweeper” – and it had pretty major issues. Plus, there is no evidence he ever sold it, much less created the thing described in his patent. Either way, Hess was proposing using a rotating brush and a bellows mechanism designed to shoot out a strong blast of air. He also explains in the patent that “the dust and fine dirt accompanies the air in its passage to the bellows and from thence down to the water chambers.” In other words, he was saying the air would be cleansed by water. It is not clear either how Hess intended for his machine to gain the power necessary to do their work.

In 1869, Ives W. McGaffey of Chicago, Illinois took this invention one step further. In his patent (U.S. patent 91145), he sets up his invention by saying,

The accumulation of dust and dirt/in dwelling-houses is a source of great annoyance to all good housekeepers, a large portion of the dust being so light that the ordinary process of sweeping sends it dying into the ain-so that it is difficult to control or expel it from the room.

He goes on to describe a similar machine to Hess’s save for two important additions: a hand-operated crank to produce power and the machine standing upright, resembling modern vacuum cleaners. Hence, why many historians credit McGaffey with the invention of the vacuum cleaner instead of Hess. Even with a crank, this was hard work. As described by the book Vacuum Cleaner: A History, “The faster operator turned the crank, the faster the fan went, and, presumably, the greater the suction. It was with much work, but with little result, but it seemed better than a carpet sweeper.”

McGaffey did try to sell his invention retail for twenty five dollars ($425 today) and with the name the “Whirlwind,” but found few buyers.

For the next 29 years, the “carpet sweeper” didn’t have any other significant (at least recorded) innovations. It wasn’t until 1898 when John S. Thurman of St. Louis submitted a patent (U.S. patent 634042) for a gasoline-powered “pneumatic carpet renovator,” that things started to pick up again in the broom replacing world. Thurman’s device “dislodged” dust by blasting the carpet with compressed air, then blew it into a receptacle. There was no sucking involved, so it wasn’t really a “vacuum” cleaner as we might think of it. His contraption was also not very portable, but rather the size of the cabin of a horse-drawn carriage. So, Thurman offered door-to-door service in the St. Louis area for four dollars a visit (about $110 today). He even took out an ad in the St. Louis Dispatch. Thurman’s business was a moderate success, though it wasn’t technically a vacuum cleaner as we’d think of it, just a device that did the same basic job.

It was in 1901 when Herbert Cecil Booth, an English structural engineer, saw a demonstration by an American inventor where, like Thurman’s design, it blasted dust out and then blew it away. (Booth, in interviews, did not name the inventor.) When Booth approached the gentlemen and asked why it wasn’t designed to suck, he was yelled at and told that no one and no machine had been able to suck dust successfully.

Booth decided he was going to be the first.

He figured if he could just reverse Thurman’s design, from blowing to sucking, it could work. Booth created “a massive gasoline-powered and horse-drawn vacuum cleaner” and received several patents for it throughout 1901. He called his sucking machine a “Puffing Billy.” Booth also offered home service and it was so popular that the British Navy called him into service to clean London’s Crystal Palace when a bunch of naval reservist came down with “spotted fever.”

While Booth’s invention worked well, it wasn’t compact nor meant for personal home-use. But through the early 1900s, patents across the world were submitted to try to capitalize on this new innovation. However, despite countless well educated engineers and inventors trying their hand, it was actually 60 year old James Murray Spangler, a department store janitor and hobbyist inventor in Canton, Ohio, who invented the first compact, ready-for-home-use vacuum cleaner.

Spangler suffered from asthma and his job was to dust and sweep every corner of the store. Needless to say, he had constant asthma attacks at work. To solve this issue, Spangler made his own vacuum cleaner from a tin soapbox, a sateen pillowcase (as a dust collector), and a broom handle. Inside of the box, he had an electric motor he pulled from a sewing machine which powered a fan and a rotating brush. The crudely-made machine collected dirt and blew it out the back, where it was caught by an attached dust bag (the pillowcase).

Unbelievably, the machine, dubbed the “suction sweeper” worked well. He was able to clean the whole building and his asthma subsided. He then set about perfecting his design as well as patenting the machine. After receiving his patent in 1908, he began selling the machines, which were quite popular, but Spangler didn’t have money to set up a factory to mass produce them and initial funds he received for such an endeavor dried up quickly. Luckily, one of his very satisfied customers was his cousin, Susan Hoover.

Susan Hoover was also the wife of leather goods manufacture William Hoover. After seeing it demonstrated, William saw the business potential for such a device and had the funds to mass produce and market it.  He was also looking to diversify away from the leather industry as the burgeoning automobile industry was starting to cut into his bottom line with fewer leather horse harnesses and related gear needed. So he bought the rights to the patent from Spangler, formed a partnership with him, and began mass producing his “suction sweeper.”

William Hoover was also a great marketer, coming up with the idea of door to door salesmen to demonstrate how the vacuum cleaner worked. He also ran newspaper ads in the Saturday Evening Post that promised customers ten days of free use with the machine. If they weren’t satisfied, they could return the “vacuum cleaner” (named by Hoover) free of charge. By 1912, the Hoover vacuum cleaner had “sucked” up the world and its dominance in the early market resulted in many people calling the vacuum cleaner a “hoover,” regardless of brand, something that’s still true in some regions today.