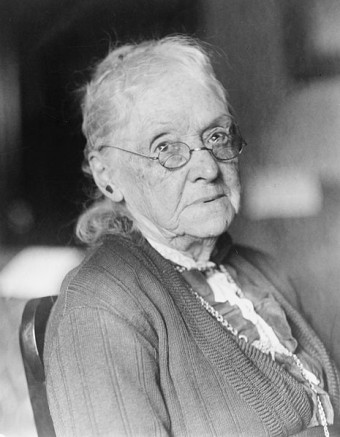 In November 1922, Georgia Governor Thomas Hardwick found himself in quite the quandary. He desperately wanted to run for the Senate seat left empty due to the death of Thomas Watson in September – but he had actively opposed the passage of the 19th amendment. Now that it was law, how could he charm the female voters he so fervently never wanted to exist in the first place?

He figured his ace in the hole was Rebecca Ann Latimer Felton, a respected and well known eighty-seven-year-old suffragist, temperance advocate and columnist – and unapologetic white supremacist who advocated everything from segregation to lynching (which, to be fair, hardly made her stick out like a sore thumb in 1920s Georgia). Her husband, William H. Felton, had served in the House of Representatives and the state legislature. After he died in 1909, Rebecca continued her involvement in Georgia politics.

Hardwick never intended for Felton to actually be sworn in as a U.S. Senator. The Senate was in recess and was not expected to convene until the 1922 elections were over. By that time, Felton would have to stand aside in favor of her duly-elected replacement (hopefully himself). Felton’s supporters cried foul, and flooded President Warren G. Harding with letters urging him to seat Georgia’s new senator during a special session of Congress.

Hardwick’s plan fell apart when he lost his bid for the Senate seat, and Walter F.George became the late Senator Thomas Watson’s elected replacement. Despite this, President Harding called Congress into session and Walter George astutely took a back seat as Rebecca Felton was sworn in as the country’s first female senator on November 21, 1922.

With an elected Senator in place, her term wouldn’t last long. The very next day, Felton stood aside as Watson took his place in the Old Boys Network, but other women were coming. When Felton addressed the Senate on November 22, she conceded “there may be but very few women senators in the next few years… [but] when the women of the country come in and sit with you . . . you will get ability, you will get integrity of purpose, you will get exalted patriotism, and you will get unstinted usefulness.”