This Day in History: November 17th 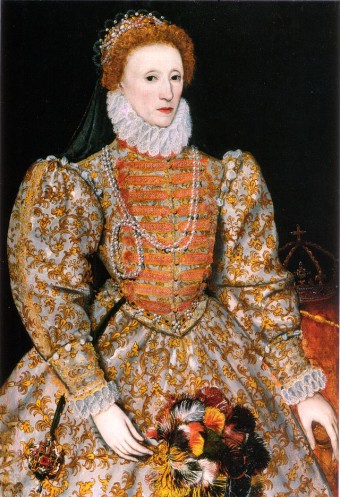 “A Faerie Land ruled by a Faerie Queene” – Longleat

On November 17, 1558, the Lords of the Council rode from London to the palace of Hatfield on a mission of great importance. Sir Nicholas Throckmorton carried a ring belonging to Queen Mary as a token of proof for her younger half-sister Elizabeth that Mary had died, and that Elizabeth herself was now Queen of England.

According to the traditional legend, Elizabeth was sitting under an ancient oak tree reading when she was told the news of her ascension. Completely overcome, she fell to her knees and quoted from Psalm 118 in Latin, “This is the Lord’s doing: it is marvellous in our eyes.”

Whatever the case, the Elizabethan era (1558-1603) was an extraordinary time during the development of England as a sovereign nation. The destruction of the Spanish Armada (which was as much due to luck as it was to military prowess), along with the final break from the Catholic Church after the death of Queen Mary led to a heightened sense of independence and English nationalism. Elizabeth’s refusal to marry (she claimed to be married to her people) was another factor in keeping foreign influence out of England for the duration of her reign.

When Elizabeth came to the throne, all of England’s strongholds in Europe had been lost. The last of them, Calais in France, had slipped away during Mary’s watch. Elizabeth never preferred confrontation, and decided embroiling herself in European politics wasn’t worth the risk of Catholic Europe forming a coalition against her.

Elizabeth’s England was looking to the New World, not the Old. During the Elizabethan Era, Sir Francis Drake was circumnavigating the globe, and Sir Walter Raleigh was crossing the Atlantic. He founded a colony on the east coast of the Americas and named it in honor of the Virgin Queen – Virginia. Piracy also abounded on the high seas, and both Drake and Raleigh were as renowned at home in England for their ship raids as they were for their other accomplishments.

The English Renaissance blossomed during the reign of Elizabeth I. The arts enjoyed a golden age abounding with creative geniuses whose works are still revered as artistic measuring sticks today. The world of music saw the emergence of Thomas Tallis and his protégée Thomas Byrd. English music developed its own unique style, and the still-new Church of England had music created specifically tailored for its rites.

English literature also flourished during the Elizabethan Age. Francis Bacon advanced the form of essay writing, and Edmund Spencer’s “Faerie Queene” provides interesting insight into the 16th century mindset. When a young playwright named William Shakespeare expanded upon the use of blank verse first used by ground-breaking poet and writer Christopher Marlowe, the world of literature – and theater – was never the same again. Shakespeare also had a heavy hand in shaping the English language. Many words and phrases we use on a daily basis originate from Shakespeare and even more are often falsely credited to him that he did not invent, but popularized. On both counts, he helped expand the English vocabulary enormously.

The Elizabethan Age is seen as the beginning of modern English history, the time when England began looking westward instead of eastward. Much of the English national consciousness is drawn from the period during the reign of Elizabeth I.

So, Henry VIII really didn’t need that male heir after all, did he?