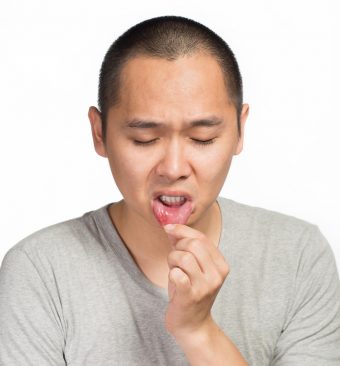 The symptoms of canker sores are well known. In their minor form, canker sores are small, rounded or ovate, white or yellow bumps with red edges that usually clear up within a week or so. Major canker sores are less well defined with irregular edges and can take weeks to heal – sometimes even leaving scarring.

A less known form of canker sore, herpetiform, appears in groups of anywhere from 10 to 100 pinpoint-sized bumps. These have irregular edges, but heal within a week or two and do not leave scars.

Women are more likely to suffer from canker sores than men, and a tendency toward canker sores is apparently hereditary.

Beyond this, while there are many cases where the exact cause of a canker sore isn’t known, the most common trigger for canker sores is a slight injury to the inside of your mouth. Biting your cheek, getting a scratch from dental work and even too-vigorous brushing can be the beginning of what develops into a painful sore.

Other causes include certain foods. Spicy, abrasive and highly acidic foods are associated with canker sores, as are those foods that are related to sensitivities, including coffee, eggs, nuts and chocolate. On the other hand, a poor diet has also been linked to canker sores – particularly where vitamin B-12, folate, iron or zinc deficiencies are present.

Viral infections and bacteria can also cause canker sores. For instance, the bacteria that causes stomach ulcers, Helicobacter pylori (See: Nobel Prize Winner Barry J. Marshall in Part Proved What Causes Ulcers by Ingesting the Bacteria He Thought Was Causing Them), has been known to cause the sores, and sometimes just an allergic reaction to naturally occurring bacteria may cause one. Conversely, toothpastes (which help eliminate unwanted bacteria) that contain sodium lauryl sulfate have also been linked with canker sores.

Women can thank their menstrual cycles for some of their canker sores, and people of both sexes develop them during times of stress, though as with many of the triggers for canker sores, the exact reason behind this isn’t fully understood.

Note, too, that canker sores can be a sign of a more serious condition, such as gastrointestinal disorders like Crohn’s disease, celiac disease and ulcerative colitis, Behcet’s disease (an inflammatory disease), and autoimmune or immune suppressive conditions.

For minor sores, the Mayo Clinic recommends making a rinse – either with banking soda (1 tsp) and warm water (1/2 cup), or with Benadryl (1 tsp) and either Kaopectate (1 part) or Maalox (1 part).

The NIH suggests occasionally dabbing the sore with a mixture of ½ part hydrogen peroxide and ½ part water, then followed up with a dab of milk of magnesia. Other recommendations include covering the sore with a paste made of baking soda and water, while others suggest dealing with the pain with a topical anesthetic (like Anbesol).

Major sores, and unusually painful ones, can be treated with topical prescription medicines. Serious cases may require the use of a steroid-based mouth rinse, which will reduce inflammation and help with pain. Sometimes an antibiotic is prescribed, as are vitamin supplements.

If you really want the canker sore gone rapidly, your physician may agree to cauterize it. Using either an instrument or a burning chemical (such as debacterol), the tissue of the sore is seared and destroyed. Silver nitrate is also sometimes used, and it has been known to relieve the pain of a canker sore.

Although canker sores cannot be completely prevented, there are a few things you can do to limit your risk.

Chips and other abrasive foods can cause tiny cuts in the mouth that can lead to canker sores, so avoid them. The same goes for acidic and spicy foods. On the other hand, be sure to eat a balanced diet and incorporate stress-reduction techniques into your daily routine.

You can also avoid minor mouth injuries by brushing carefully with a soft-bristled brush and not talking with your mouth full (which is one of the most common times people bite their cheeks). Likewise, braces wearers can protect their cheeks by applying orthodontic waxes to cover irritating hardware. Some doctors also recommend giving up chewing gum, as this is also a common cause of cheek bites.