This Day in History: October 29th- Cyrus the Great, “The Lord’s Anointed” 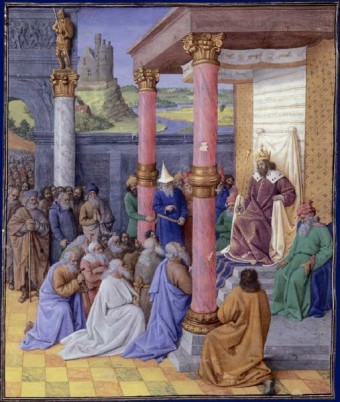 On October 29, 539 B.C.E., Cyrus the Great, King of Persia, entered the city of Babylon and proclaimed himself “King of Babylon, King of Sumer and Akkad, King of the four corners of the world.” He came bearing the Cyrus Cylinder, the first Charter of Human Rights, which he placed under the walls of Babylon.

Cyrus was not your typical conqueror. The vast Persian Empire he created was a primitive form of federalism where each state had absolute autonomy. Cultural differences were respected and Cyrus did not interfere with local customs, religions, laws and dialects. Considering his territory spanned three continents and included 25 nations, Cyrus proved he was not only benevolent, but also wise.

Unlike many of the rulers that came before (and after) him, Cyrus set very high standards fro himself. He believed that no man was fit to be king unless he was the most capable among those he intended to rule. When his men fought, he fought alongside them. He was reasonable, intelligent, and felt no compulsion to wrap himself in a cloak of majesty.

The Persians called him “Father.” The Jews, who were exiled in Babylon until Cyrus came to town and freed them, praised him as “The Lord’s anointed.” Even the Greeks, the ancient enemies of the Persians, regarded Cyrus as “A worthy ruler and lawgiver.”

So why was Cyrus so revered and genuinely loved by those he ruled? It’s not hard to fathom when you imagine him speaking these words to the citizens of Babylon the day he entered the city:

Now that I put the crown of kingdom of Persia I announce that I will respect the traditions, customs and religions of the nations of my empire and never let any of my governors and subordinates look down on or insult them. I will impose my monarchy on no nation. Each is free to accept it, and if any one of them rejects it, I never resolve on war to reign. I will never let anyone oppress any others, and if it occurs, I will take his or her right back and penalize the oppressor. I will never let anyone take possession of movable and landed properties of the others by force or without compensation. Until I am alive, I prevent unpaid, forced labor. Today, I announce that everyone is free to choose a religion. People are free to live in all regions and take up a job provided that they never violate other’s rights. No one can be penalized for his or her relatives’ faults. I prevent slavery and my governors and subordinates are obliged to prohibit exchanging men and women as slaves within their own ruling domains. Such a tradition should be exterminated the world over…

Talk about being ahead of his time.

October 29, 2004 was the first annual celebration of Cyrus the Great Day by the Iranian people and champions of human rights across the globe. In further recognition of Cyrus’ immeasurable contribution to human history, the Cyrus Cylinder has been displayed in many major museums (it permanently resides in the British Museum), and a copy is kept at the United Nations building as a reminder of one long-ago, beloved King’s high standards for leadership.