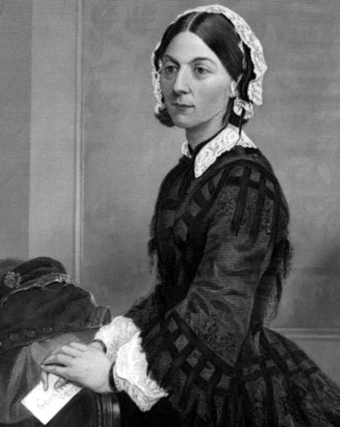 Lo! in that house of misery
A lady with a lamp I see
Pass through the glimmering gloom,
And flit from room to room. –Henry Wadsworth Longfellow

On October 21, 1854, Florence Nightingale departed for the Crimea accompanied by 38 other women at the request of Sidney Herbert, Britain’s secretary of state at war. This call was in response to journalist William Howard Russell’s reports that British soldiers were receiving sub-par medical care in abysmal conditions.

Florence Nightingale was born on May 12, 1820, and was named for the city of her birth. She came from a wealthy family and was given an excellent education by her liberal-minded parents. Impatient with the narrow roles presented to females of her social class, Florence began working among the poor. She quickly gravitated to the sick and began visiting London hospitals. But nursing was only one rung up the ladder from prostitution in those days, and even her progressive parents tried to dissuade her from her course.

It was wasted effort on their part. Florence spent the next eleven years visiting hospitals and learning the art of nursing from the Catholic Sisters of St. Vincent de Paul and the Protestant Deaconesses at Kaiserswerth. By 1853, she was named superintendent of the Hospital for Invalid Gentlewomen in London.

After answering her country’s cry for help in the Crimea, (“Are none of the daughters of England, at this extreme hour of need, ready for such a work of mercy?”) she and her fellow nurses arrived in Scutari on November 4, 1854. The barracks were huge, filthy, and lacking the most basic necessities to stem the infections running rampant through their miserable occupants.

There were no vessels for water or utensils of any kind; no soap, towels, or clothes, no hospital clothes; the men lying in their uniforms, stiff with gore and covered with filth to a degree and of a kind no one could write about; their persons covered with vermin . . .

Florence had her work cut out for her.

Many of the volunteer nurses were complete newbies, and the behavior of the male orderlies in the barracks was often offensive, but Florence still managed to improve conditions at the Scutari hospital before the year was out. Nightingale oversaw the establishment of a kitchen and laundry facilities, and also looked after the families of the wounded soldiers. She was extremely overworked but would not allow any of the other nurses on the wards after 8 p.m. (because of those pesky orderlies). Her patients came to love her, calling her “The Lady With the Lamp.”

In addition to nursing the sick and wounded, Florence collected data and improved recorded keeping practices, which showed that by improving sanitation the mortality rate decreases. Nightingale demonstrated her point graphically in polar-area charts, an innovation of her own invention. These graphs are similar to pie charts, but each segment extends outward proportional to the data being represented, instead of being shown by size of its angle within the circle itself.

In May 1855, Nightingale came down with what was known as Crimean fever. She was dangerously ill for almost two weeks but returned to work in Scutari in June. Florence never fully recovered, and spent the next 25 years battling severe chronic pain, which often confined her to bed.

The Crimean War ended on March 30, 1856. Florence returned home to England after the hospitals closed in August. She continued to work towards social reform in health care for the rest of her life (mainly from her home), and published the ground breaking Notes on Nursing: What It Is and What It Is Not. She was the first woman to receive the Order of Merit, which was bestowed on her by King Edward VII in 1907.

Florence Nightingale died on August 13, 1910. She had refused the offer of a state funeral and burial in Westminster Abbey (ahead of the fact, obviously), choosing instead to be buried in her family plot in Hampshire, England.