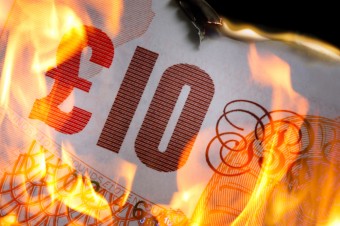 On August 23, 1994, Bill Drummond and Jimmy Cauty set fire to, and completely destroyed, £1 million. What makes the story even weirder is that nobody, not even the burners, seems to really know precisely why.

Beginning in 1987, under several different names including The Justified Ancients of Mu Mu and The Timelords, Drummond and Cauty produced a number of hit club music singles, including “Doctorin’ the Tardis.” By 1991, as The KLF (Kopyright Liberation Front), the two were one of Britain’s best-selling music acts.

Before retiring in 1992, the duo released a blueprint for producing a hit single, The Manual (How to Have a Number One the Easy Way) in 1988, and their guidance also provides insight into the mindset of the artists:

Firstly, you must be skint [broke] and on the dole [state benefits]. Anybody with a proper job or tied up with full time education will not have the time to devote to see it through . . . If you are already a musician stop playing your instrument. Even better, sell the junk . . . .”

Apparently the advice was good, since subsequent bands, including Edelweiss, The Pipettes and the Klaxons, all enjoyed success after reading the book.

Nailed to the Wall

Although they were no longer recording, the two continued to work together on projects. By August 1994, they had renamed themselves the K Foundation and created “Nailed to the Wall,” which was essentially to be £1 million physically nailed to a pine frame.

Dissatisfied with the reception (or lack thereof) “Nailed to the Wall” received, Drummond and Cauty devised a new plan. After being rejected by the Tate Gallery in Liverpool, Cauty asked, “Why don’t we just burn it?” A question to which Drummond, apparently, had no better reply than “sure.”

Preferring a small group, Cauty and Drummond made their way to the relatively isolated island of Jura in the Inner Hebrides with reporter Jim Reid and filmmaker Gimpo (aka Alan Goodrick), on August 22, 1994.

Before leaving London, the group had to get the £1 million. Since you can’t just withdraw it from an ATM and no bank keeps that much handy in small bills, Drummond and Cauty had hired a security company, named Ratedale, to arrange the money.

Driving to an industrial area near Gatwick airport, Cauty and Drummond entered a warehouse and come out a few minutes later with two security guards carrying suitcases. The troop then drove south to the Redhill Aerodrome where they caught a plane to the islands.

Staying in a hotel in Jura, the party went to check on the burn site earlier in the evening, an old boathouse Drummond and Cauty had previously used to burn a wicker man on midsummer’s day 1991. After returning to the hotel and intending to going to bed, shortly after midnight on August 23, 1994, Cauty and Drummond changed their minds and the group returned to the boathouse:

Gimpo drags a piece of scaffolding [into the boathouse with] two triangular bits of cloth attached near the top of the pole . . . . To these Gimpo adds two survival flares . . . . Below the two triangular cloths Cauty is tying a large piece of aluminum . . . survival blanket. . . . The pole is hoisted up to the [wooden] drum which is laid on its side and the lights and flags flutter and blink over the stormy night. Inside the boathouse Drummond is tying the two bags on to the ropes. . . . The bags are untied and opened . . . . Cauty hands [a bundle of money] to Drummond and . . . lights them both . . . . Drummond is standing to the left of the fireplace throwing fresh bundles in, Cauty is to the right . . . . After five minutes their actions become mechanical, almost like it is . . . coal that they are fueling the fire with.

According to Reid, all the money was destroyed after about two hours.

Although Cauty had attempted to destroy all photographic and video evidence of the burning, Gimpo retained a copy and produced the film Watch the K Foundation Burn a Million Quid, which was taken on a screening tour the next year.

Friends later reported that Drummond and Cauty were “haunted” by the burning. Although in 2000 Drummond claimed he did not rue burning the money, by 2004 he noted: “Of course I regret it – who wouldn’t! My children especially regret it, but I don’t regret it all the time.”

Early on, Drummond told Reid that they had nothing better to do with the cash and “needed to express something about money and we wanted to push it through art.”

In 2004, Drummond elaborated: “After a while, we realized that whatever answer we came up with would not be good enough . . . . It’s for other people to explore.”