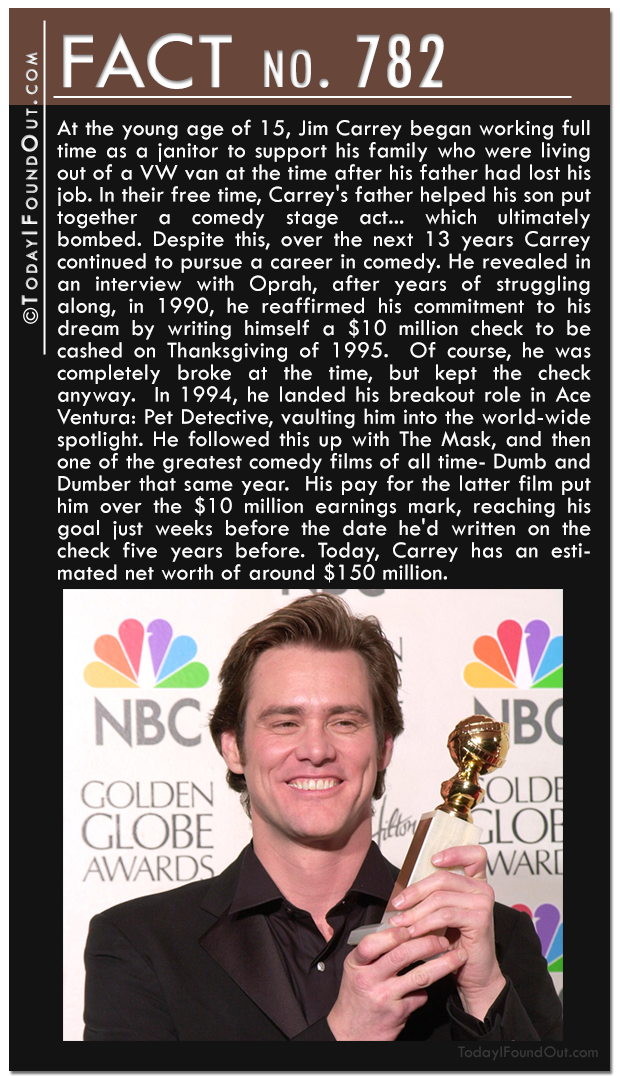 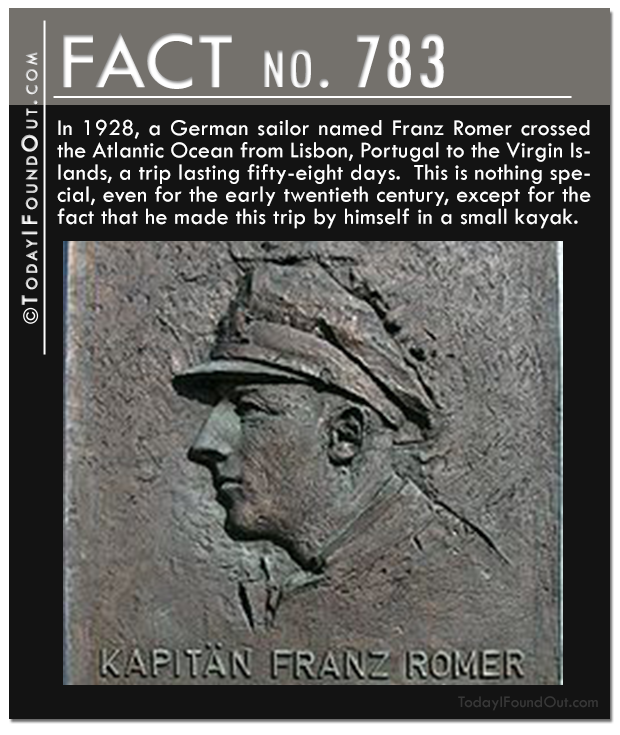 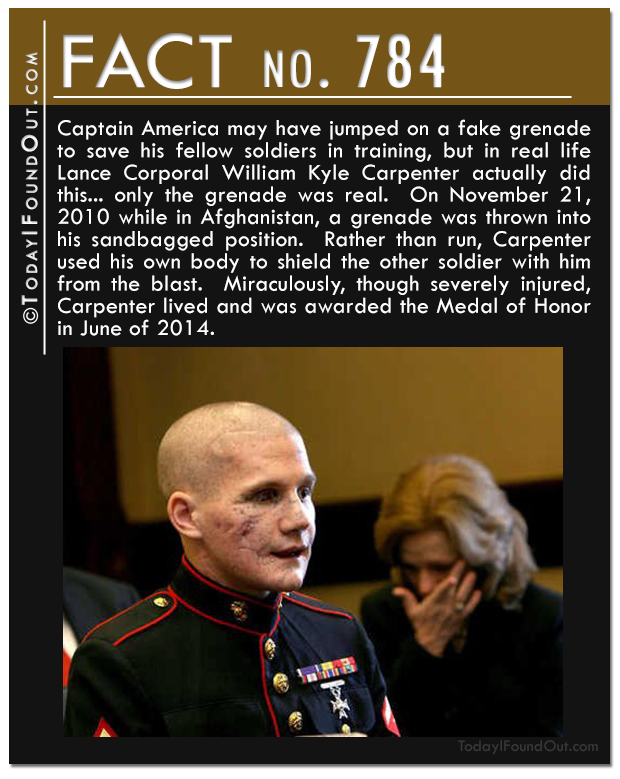 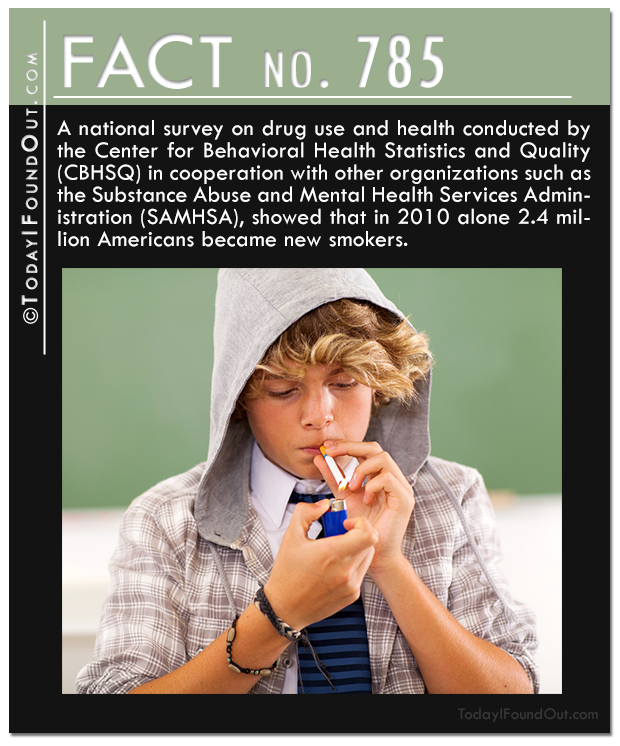 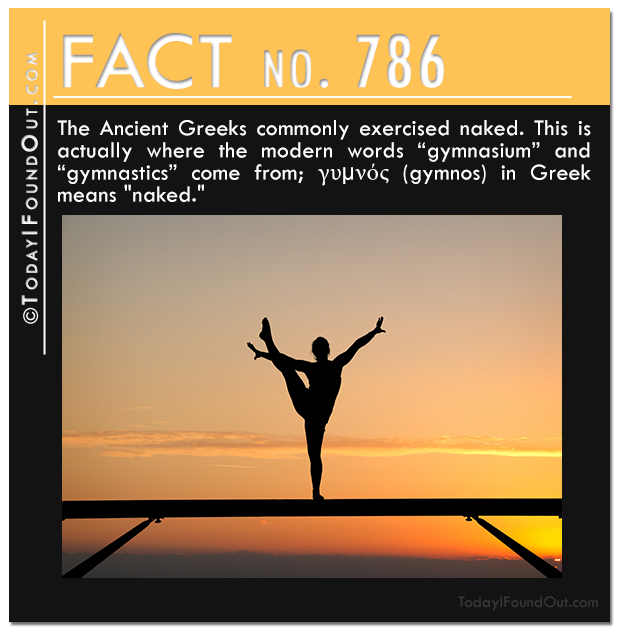 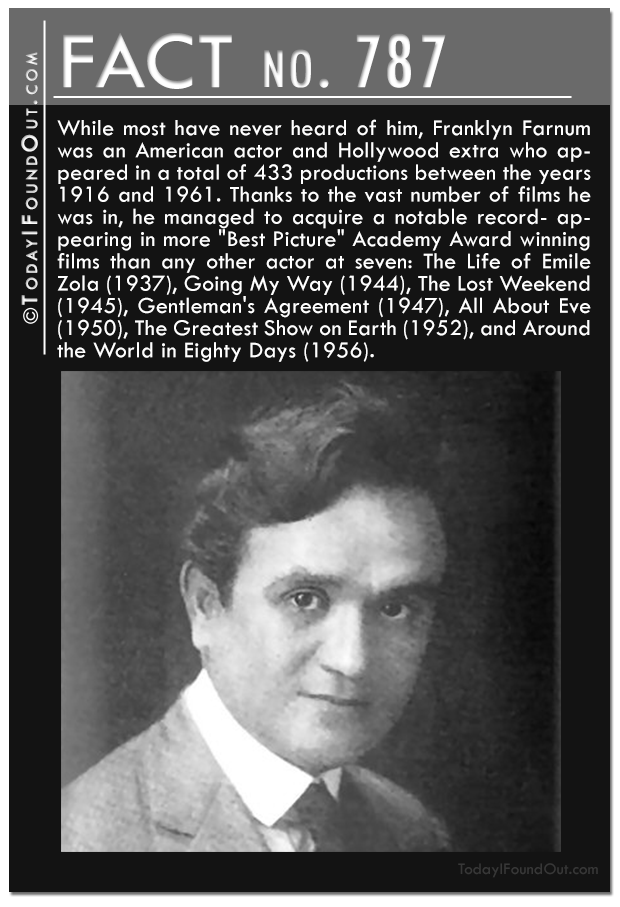 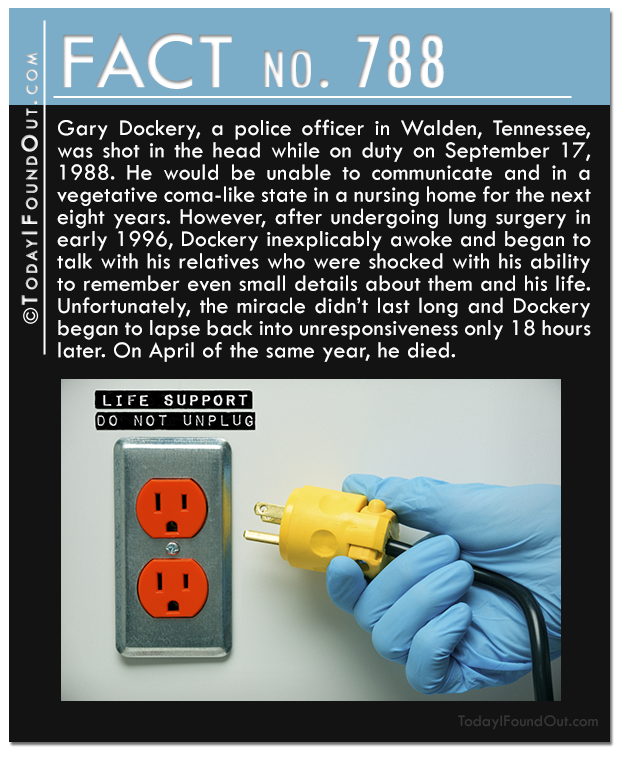 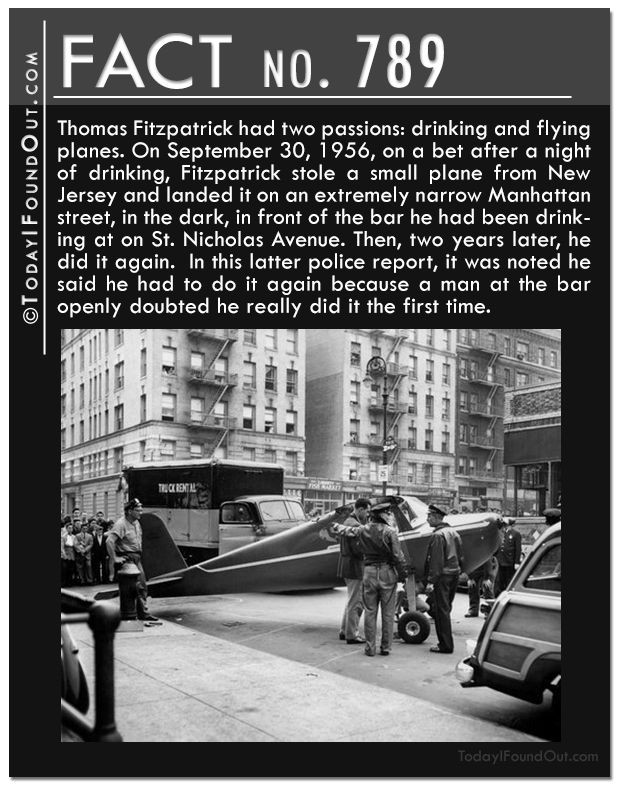 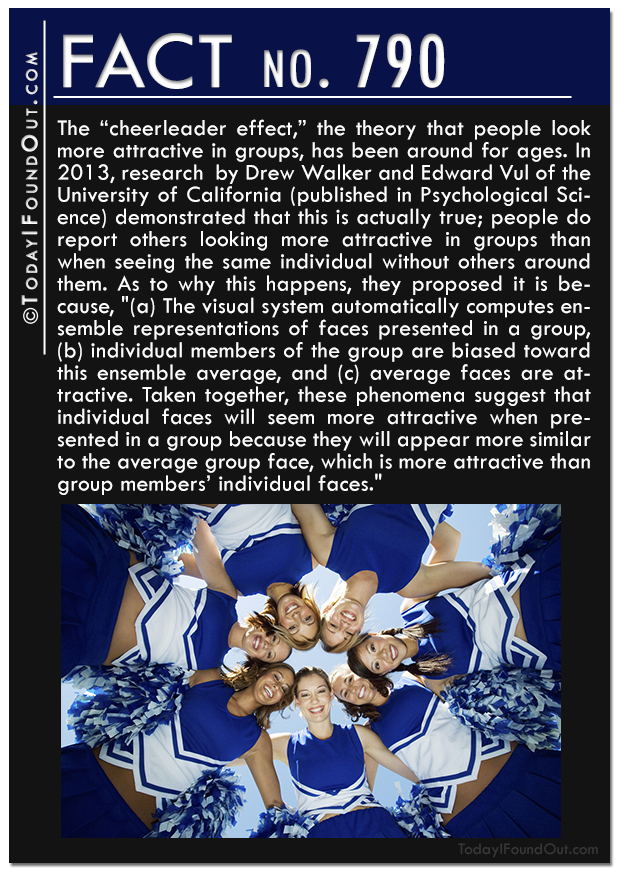 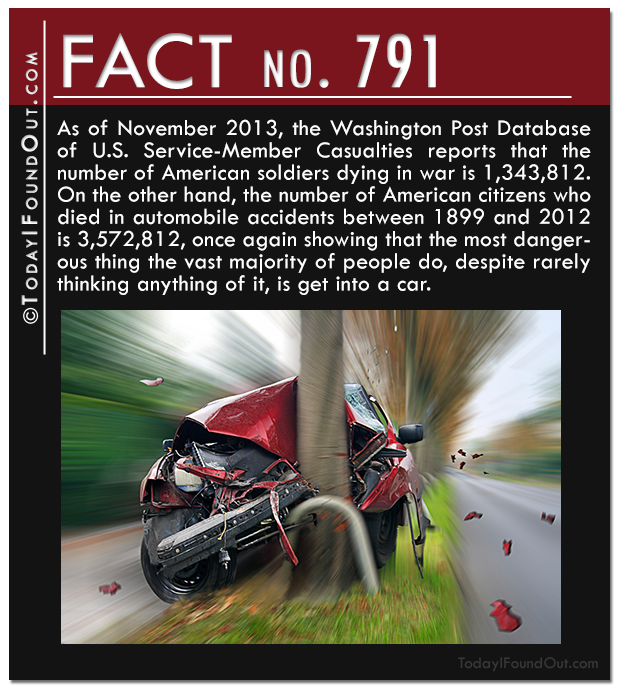 782: At the young age of 15, Jim Carrey began working full time as a janitor to support his family who were living out of a VW van at the time after his father had lost his job. In their free time, Carrey’s father helped his son put together a comedy stage act… which ultimately bombed. Despite this, over the next 13 years Carrey continued to pursue a career in comedy. He revealed in an interview with Oprah, after years of struggling along, in 1990, he reaffirmed his commitment to his dream by writing himself a $10 million check to be cashed on Thanksgiving of 1995.  Of course, he was completely broke at the time, but kept the check anyway.  In 1994, he landed his breakout role in Ace Ventura: Pet Detective, vaulting him into the world-wide spotlight. He followed this up with The Mask, and then one of the greatest comedy films of all time- Dumb and Dumber that same year.  His pay for the latter film put him over the $10 million earnings mark, reaching his goal just weeks before the date he’d written on the check five years before. Today, Carrey has an estimated net worth of around $150 million.

783: In 1928, a German sailor named Franz Romer crossed the Atlantic Ocean from Lisbon, Portugal to the Virgin Islands, a trip lasting fifty-eight days.  This is nothing special, even for the early twentieth century, except for the fact that he made this trip by himself in a small kayak.

784: Captain America may have jumped on a fake grenade to save his fellow soldiers in training, but in real life Lance Corporal William Kyle Carpenter actually did this… only the grenade was real.  On November 21, 2010 while in Afghanistan, a grenade was thrown into his sandbagged position.  Rather than run, he used his own body to shield the other soldier with him from the blast.  Miraculously, though severely injured, Carpenter lived and was awarded the Medal of Honor in June of 2014.

785: A national survey on drug use and health conducted by the Center for Behavioral Health Statistics and Quality (CBHSQ) in cooperation with other organizations such as the Substance Abuse and Mental Health Services Administration (SAMHSA), showed that in 2010 alone 2.4 million Americans became new smokers.

786: The Ancient Greeks commonly exercised naked. This is actually where the modern words “gymnasium” and “gymnastics” come from; γυμνός (gymnos) in Greek means “naked.”

788: Gary Dockery, a police officer in Walden, Tennessee, was shot in the head while on duty on September 17, 1988. He would be unable to communicate and in a vegetative coma-like state in a nursing home for the next eight years. However, after undergoing lung surgery in early 1996, Dockery inexplicably awoke and began to talk with his relatives who were shocked with his ability to remember even small details about them and his life. Unfortunately, the miracle didn’t last long and Dockery began to lapse back into unresponsiveness only 18 hours later. On April of the same year, he died.

789: Thomas Fitzpatrick had two passions: drinking and flying planes. On September 30, 1956, on a bet after a night of drinking, Fitzpatrick stole a small plane from New Jersey and landed it on an extremely narrow Manhattan street, in the dark, in front of the bar he had been drinking at on St. Nicholas Avenue. Then, two years later, he did it again.  In this latter police report, it was noted he said he had to do it again because a man at the bar openly doubted he really did it the first time.

790: The “cheerleader effect,” the theory that people look more attractive in groups, has been around for ages. In 2013, research  by Drew Walker and Edward Vul of the University of California (published in Psychological Science) demonstrated that this is actually true; people do report others looking more attractive in groups than when seeing the same individual without others around them. As to why this happens, they proposed it is because, “(a) The visual system automatically computes ensemble representations of faces presented in a group, (b) individual members of the group are biased toward this ensemble average, and (c) average faces are attractive. Taken together, these phenomena suggest that individual faces will seem more attractive when presented in a group because they will appear more similar to the average group face, which is more attractive than group members’ individual faces.”

791: As of November 2013, the Washington Post Database of U.S. Service-Member Casualties reports that the number of American soldiers dying in war is 1,343,812. On the other hand, the number of American citizens who died in automobile accidents between 1899 and 2012 is 3,572,812, once again showing that the most dangerous thing the vast majority of people do, despite rarely thinking anything of it, is get in a car.