This Day in History: August 8th 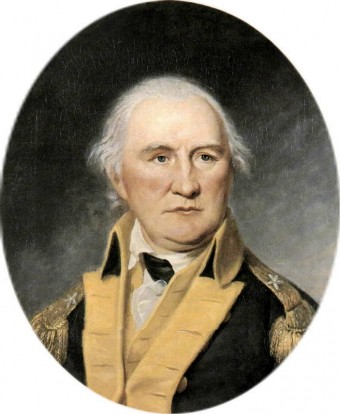 “They are remarkably stout and hardy men; many of them exceeding six feet in height. They are dressed in white frocks, or rifle-shirts, and round hats. These men are remarkable for the accuracy of their aim; striking a mark with great certainty at two hundred yards distance. At a review, a company of them, while on a quick advance, fired their balls into objects of seven inches diameter, at the distance of two hundred and fifty yards. They are now stationed on our lines, and their shot have frequently proved fatal to British officers and soldiers who expose themselves to view, even at more than double the distance of common musket-shot.” – Thacher’s Military Journal during the American Revolutionary War

When the New England colonists laid siege to British-occupied Boston in 1775, a call for assistance from the other colonies was put out by the Continental Congress. Virginia selected Captain Daniel Morgan, who had led their militia throughout the Seven Years War and the birth of the Revolution at the Battle of Lexington and Concord, to head one of the state’s two rifle divisions.

Morgan managed to gather 96 men for the job in just 10 days, and got them all up to Cambridge, MA on August 8, 1775. He pulled this off in a mere three weeks, a feat that became known as the Bee Line March. He knew the brand new commander-in-chief of the Continental Army very well; Washington had dubbed him “The Old Waggoneer” at the bloody Battle of the Wilderness when Morgan had removed the wounded soldiers from the field in his wagon.

Though Morgan’s gruff, independent backwoods men sometimes verged on being a disciplinary problem, their skills as marksmen more than made up for it, and they quickly became known as “Morgan’s Sharpshooters.”

In the fall of 1775, Morgan led an attack on Quebec masterminded by Colonel Benedict Arnold. The invasion failed and Morgan spent a year as a prisoner of war, but upon his release he was promoted to the rank of colonel. He was also tasked with creating and commanding the 11th Virginia Regiment. His entrance exam was simple yet perfect: candidates had to shoot a broadside print of King George from 100 yards away on their first try.

During his last military action, Morgan helped out his old friend George Washington, now the President of the United States, once again. When the Whiskey Rebellion in western Pennsylvania was threatening the stability of the brand new Union, Morgan assembled such an intimidating, overwhelming force that not a single shot needed to be fired to quell the rebellion. Now that’s a real hero.